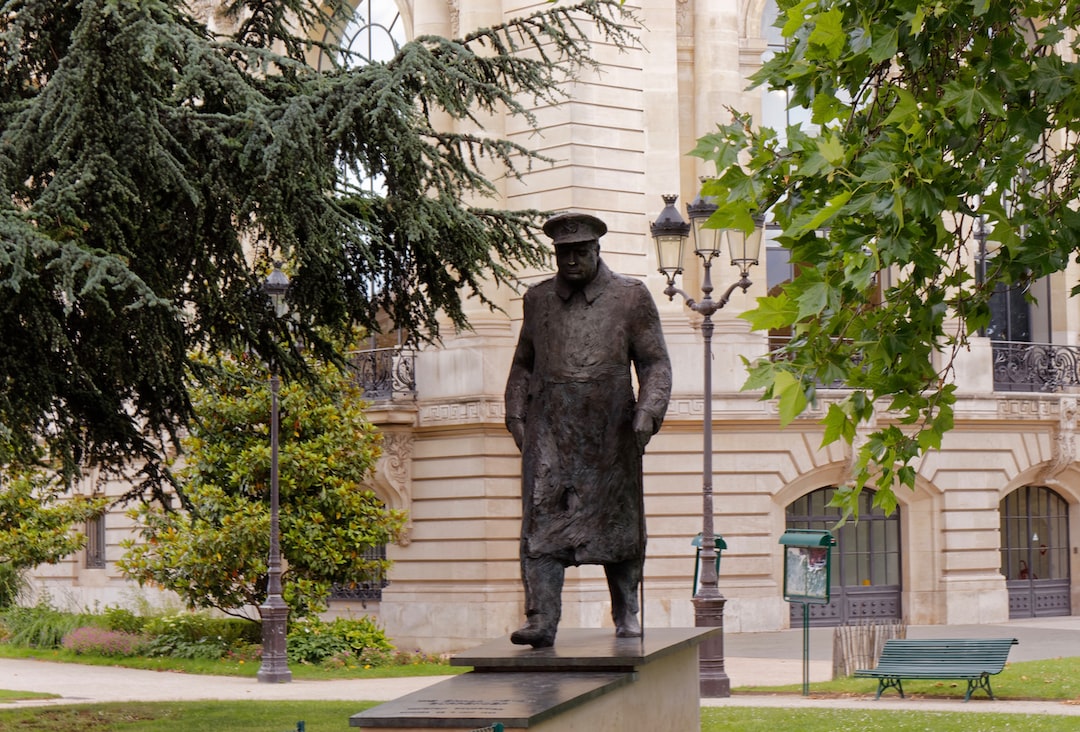 From the author: Avery wants to date his boss' daughter, but he needs to do something impress the old man. But how does that relate to a little-known fact about Winston Churchill?

Barret P. Bungate, Director of the Parallel Project, loomed over the edge of the cubicle and stared down at Avery Gibbart, his eyes colder than those of a flatfish.

Avery swallowed, his throat dry.  “Sir, about last night – I would like to explain –“

“I do not require an explanation,” Bungate said, his voice low but threatening to erupt into a bellow.  “I do not wish to hear an explanation.  The mere thought that if I had not come across that note – that my own daughter could have come into that hotel room – could have seen you in that bathtub, wearing nothing but that small—“

“But sir – Valentine’s Day – Tuffy and I’d been planning it for weeks.  It was supposed to be a romantic—“

“Enough!”  Bungate’s raised voice caused others to glance up from their work.  He chewed his lip for a moment, then leaned in close.  Avery could smell his aftershave.

“You’ve never impressed me, Gibbart,” Bungate said softly.  “Not as a researcher, and not as a… man.  I predict that you never will impress me.  And I suspect that a steady and unrelenting pressure from myself and Mrs. Bungate will eventually bring Tuffy to her senses.”

“My advice to you, Gibbart?  Stay out of my sight.”

The Director straightened up, glanced down past Avery’s waist, then curled his lip and strode away.  His office door slammed.

Avery looked at the computer monitor, but couldn’t focus.  Tuffy was floating away – was being pulled away.  The last four months of incredible happiness would fade into history, and he would sink down again.

He raised his head.  Tuffy!  She peeked towards her father’s office door, and then crowded into Avery’s cubicle.  She sat on the edge of his tub and pressed herself against Avery.  “Oh, Avery!  I saw Daddy talking to you.  Was he very mad?”

Avery gathered her closer and buried his face in her neck.  Her sweater, her puffy pink sweater that she imagined hid her extra pounds, tickled his nose.

“You have to forgive Daddy,” Tuffy murmured.  “He’s been under a lot of stress.”  She slid a finger into his water and made lazy circles.

Avery reddened, and cast a nervous glance towards Bungate’s office, but didn’t ask Tuffy to withdraw her finger.  “Yeah, I know, honey.  He’s got a stressful job.  But how can he take it out on us?”

“He won’t.  He can’t!”  Tuffy sniffled against Avery’s neck.

Tuffy attempted a dutiful giggle into his shoulder.  “Just like Daddy – always quoting Churchill.  But it’s that stupid CX-1011 file,” she said.  “Daddy might lose his job to that Norosky woman if he can’t show the Subcommittee that he can solve it.  It’s just one file!  But it’s got him snapping at everything.  Everyone.  And what difference does it make?  One file!  There are plenty of others that they haven’t found the difference.  It’s all just politics.”

“It’s important work, Tuffy.  Finding the diverging points on the worlds closest to us along the line – seeing how things can go – it can tell us a lot. Open up whole new ways to think about what kinds of policies we want to adopt, what sciences we want to research.  That’s what makes working here so exciting.  Whether your father is in charge, or--”

A sudden hope surged in Avery, then subsided just as quickly.  Even if the Director lost his position, it wouldn’t change his attitude.  “No one has been able to crack that file,” Avery said.  “What makes them think that Norosky will do any better?”

Tuffy sniffled.  He cupped her chin and raised her face.

“I’ll find a way.  You’ve got your hooks in me, and I don’t even want to try to wriggle free.  I’ll think of something.”  The automatic reassurance sounded hollow even to Avery.

“But honey, you said no one has been able to do anything with that file.”

Avery smiled.  “No one else has had my motivation.”

“I can get that.”  Vernon Wells, another researcher, pulled the file from the cabinet that Avery wasn’t able to reach and tossed it down to him.  “Now. don’t get it wet.”

“Very funny.  Thanks, Vernon.”  Avery spun his tub around and wheeled himself back to his cubicle.  Vernon followed, slowing his pace to match Avery’s.

“Find anything yet?” Vernon asked as Avery reached his cubicle and threw the papers down.  “No, don’t tell me – let me guess.  No.  Nothing.  Zero.”

“Nothing yet,” Avery corrected him.  “It’s gotta be in here somewhere.  Hidden deep down.”

“Yeah, well, that goes without saying.  But it’s not exactly a South-won-the-Civil-War case, is it?”

“It wouldn’t be, given its place in the continuum,” said Avery.  “We know it’s a fairly small difference.  But not miniscule.  I’ve only been on the case for four or five weeks.”

“Well, when you find it, let me know, will you?  I worked on that case for a solid month myself.”

Vernon put a hand on Avery’s shoulder and bent down.  “He won’t fire you, you know,” he said.  “He’s too nervous about the anti-discrimination guidelines.”

“He doesn’t have to fire me to make my life pointless.”

Vernon pointed down.  “Your tie is getting wet.”

“Hey, at least you don’t have to worry about keeping a crease in your pants.”

Vernon walked off, and Avery turned to the piles on his desk.  Files, statistics, notes from other researchers.  He even had some additional actual books produced on the other Earth – a history book, a survey of amphibians, a phone book for Lisbon, Spain.

He worked until late in the evening comparing lists of poets, playwrights, and novelists, but that world had its Twain, its Dickinson, its Shepherd and its Cervantes.  And they seemed to have all written the same works on both worlds.

Avery rubbed his eyes.  Time to go home, sleep alone in his lonely waterbed, and then come back again tomorrow and try some more.

He stretched, then saw the history book.  He pulled it towards him, began flipping idly through its pages.  He came to World War Two, and smiled.  If only this were one of the easy cases – the Nazis won the war, or Russia never joined the Allies; something big.  But no.  It had to be something smaller, something less obvious, something—

Avery’s eyes widened, and he turned back to the page that had just flipped past.

Yes.  There it was – right there in the picture, the famous picture of Roosevelt, Churchill, and Stalin at Yalta!  Avery smiled and leaned back in his tub.

Avery and Tuffy were waiting in the Director’s office when that gentleman arrived the next morning.  He strode in and hung up his coat, not looking at Avery.  “I suppose you have a very good reason for being here in my office,” he said coldly.  He took his seat and crossed his legs.

“Yes, sir.”   Avery placed the history book in front of his boss and opened it to the correct page.

Bungate took the book.  “The Big Three at Yalta.  So?”

Bungate drew in a sharp breath and looked away.

Avery continued anyway.  “—but Churchill, now, is a little different.  As you can see, on that Earth, Churchill was a mermaid!”

“We don’t use that term among ourselves,” Avery said.

Bungate directed his attention back to the picture.  “Well, the evidence is… clear.  It looks like you’ve done it, Gibbart.”

“Oh, Daddy, isn’t this wonderful?”  Tuffy clasped her arms around Avery.  “The case is solved, your job is safe--”

“Yes, and I suppose before long I’ll have little mergrandkids, too.  Damn you, Gibbart.”

This story originally appeared in The Fifth Di.