Mia made this story available for free. Say thanks by sending her a tip.    Send Tip

Young Belevor set his jaw, focused his concentration on his magic wand, and flawlessly executed a flame enchantment upon the candle before him. This time it will definitely work, he told himself. Belevor had repeated this to himself so many times over the past fortnight that it had gone from desperate prayer to mantra to ill-advised tattoo on the clavicle of his brain.

Magic hung heavy in the cramped confines of his bedroom—more of a closet, really, Belevor often grumbled—and although his fingers tingled as they should from a proper spell and his magic wand certainly had lit up with a soft, otherworldly glow of sorcery, the candle remained stubbornly unlit.

Belevor glanced out the window at the bleak, wintery landscape below the dormitory. The evening fog was rolling in and he could just barely make out the humble tops of the thatch-roofed cottages in the village close by that supported the school. It was beginning to get dark and if he couldn’t light his own candles by his own magic, he would be stuck with lots of reading homework and no light sources to study by. Again.

He couldn’t understand what was going wrong. Belevor was a solid student, and he knew the incantation backwards and forwards. His wand was practically brand new, in good repair, and besides that it handled every other spell just fine. And it wasn’t the candle, either. Belevor had tried the spell on dozens of light sources, including those that had just been in use by other students, and none would light for him. If only he had some inkling as to what the problem was, he might have a hope of lighting a candle before summer exams.

He sighed, stubbornly resigned, and raised his wand to try yet again. When the candle remained unlit, Belevor was almost relieved to hear a knock at his door, even if it did sound irritatingly cheerful. He set his wand down carefully and answered the door. As expected, a short gremlin girl in suspenders grinned up at him from beneath the brim of a ridiculously large witch’s hat. Eleanor. She was practically bursting rainbows out of her long, pointed ears.

“Good evening, Eleanor,” Belevor said as patiently and graciously as he could manage.

“Happy evening to you, Bel!” Eleanor pushed her way past him and hopped onto the edge of his desk. She waved a small brown envelope at him. “I’m delivering the mail tonight, and it seems you’ve got yourself a letter!”

Belevor frowned and stroked the spot on his chin where he hoped a beard might someday grow. It was never too early to practice thoughtful beard-stroking, the older students always said.

“Who in the world would write me a letter?” he asked no one in particular. Eleanor shrugged.

“All the more reason for you to open it now and find out! Don’t keep me waiting all night, Bel, I’ve got other joy to deliver and besides that, you’re running out of daylight to read by! Flame spell still getting the better of you?”

She said it companionably and with no trace of malice in her tone whatsoever, but Belevor still felt ruffled and pursed his lips as he took the letter from Eleanor’s outstretched hand.

Belevor truly wasn’t certain what to expect when he opened the letter, but if he had had to guess, ransom note would have been towards the bottom of the list.

“Wow, someone spent a lot of time on this, don’t you think?” Eleanor said. When Belevor remained open-mouthed and silent, Eleanor continued. “They took their time cutting out each letter so perfectly! You can’t even see an edge or a rough corner anywhere. No blocky ugly rectangle letters from the pages of Potions magazine for this kidnapper.”

“Is it still called kidnapping if it isn’t a person?” Belevor wondered. The shock of the letter’s contents still had him slightly dumbstruck.

“The headmistress would certainly know. You should probably take this to her at once, don’t you think?”

“Take what to the headmistress?” A frothy cloud of blonde hair appeared in the doorway. Reginald Beeker, this year’s insufferable gossip. Belevor groaned inwardly.

“Nothing, Reg,” he started to say, but Eleanor had already begun speaking as well, so Belevor’s discretion was done for.

“Bel’s got a ransom note! We were just wondering if it’s still called kidnapping if the thing taken isn’t a person.”

“See for yourself! And don’t you just love the work they did cutting out all the little letters?”

Before Belevor could object, Eleanor had the letter back in her hands and was holding it up for Reginald’s viewing.

BELEVOR, SON OF NANCY! HAVING TROUBLE READING AT NIGHT, LATELY?

I, APPRENTICE X, HAVE YOUR FIRE MAGIC.

BRING TEN GOLD COINS AND A BOX OF YOUR MOTHER’S PEPPERMINT FUDGE TO THE THATCH-ROOFED COTTAGE WITH A RED-PAINTED DOOR BY MIDNIGHT TOMORROW, OR SO HELP ME, YE SHALL NEVER LIGHT A WICK THE REST OF YOUR SORRY DAYS!

Belevor crossed his arms over his chest.

“Seriously, all this for sweets? I was going to bring some for everyone after the next long weekend! But not anymore, that’s for certain.”

“Find this Apprentice X and show them some real magic, that’s what!”

Eleanor and Reginald knew from the glint shining in Belevor’s eyes that on that winter’s eve, they had witnessed something truly special: the birth of a lifelong wizard rivalry. It very nearly made up for the disappointment that there would be no fudge following the next holiday weekend.

This story originally appeared in Indie.

Mia made this story available for free. Say thanks by sending her a tip.    Send Tip 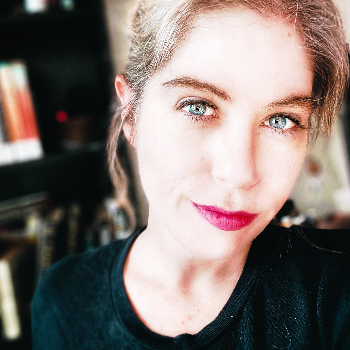 Mia Moss is writing science fiction and fantasy with a feminist edge.