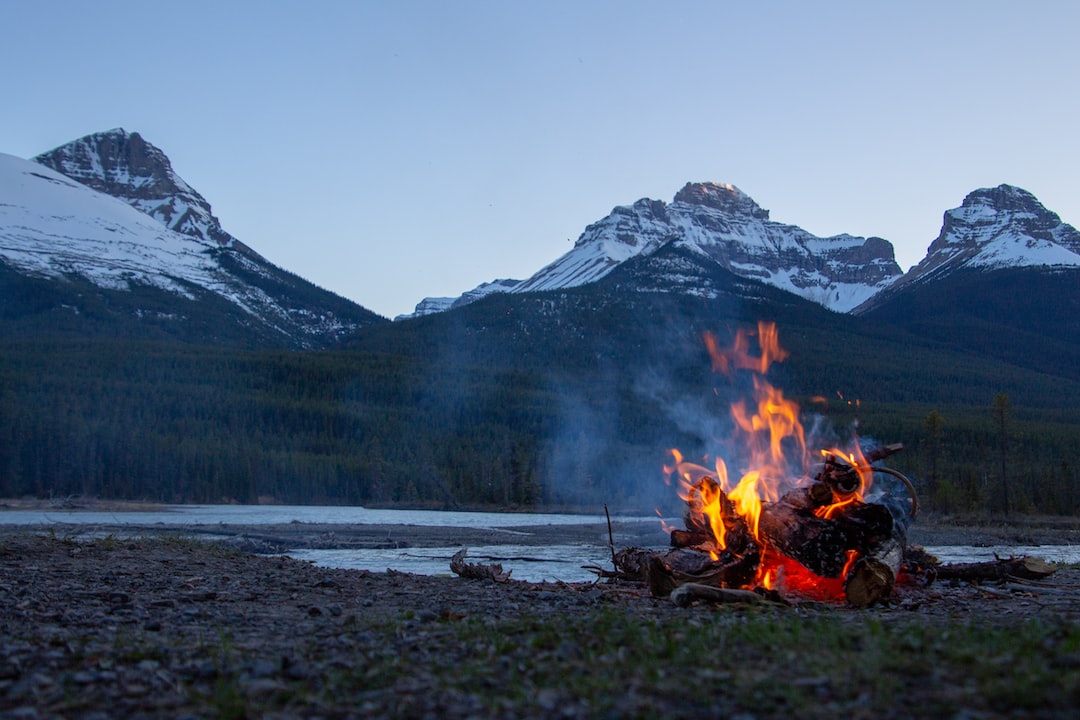 Photo by Courtnie Tosana via Unsplash.

From the author: A 19th-century fur trapper shares his campfire with an unusual visitor and finds his view of the wilderness changed forever.

As I write these words, the snow is deep and drifting around my tent, and more is falling, but I keep my ink near the candle-flame to keep it from freezing, and I keep myself warm with thoughts of you.

It has been a good winter thus far, and when at last I leave these mountains to return to you in the spring, I hope to earn enough to start a home for us.  The glossy mink I caught only yesterday should fetch enough in cloth to make you a wedding dress fine as any city girl's.

A night like this is too cold and wild for sleep, so I fall to dreaming instead.  I think of the day you will be my wife.  I think of the home we will have together, and the children who will come to fill our arms and light our days.  In my mind, the tiny flame that lights this tent becomes a warm hearth, and we sit before it together for the rest of our lives, and I know there is no man on earth richer than I...

By morning the storm had broken, and he packed up and moved camp downriver, checking his traps along the way, rejoicing at the full ones and giving the resolute shrug of the faithful to the ones he found empty.  He found one trap that seemed deliberately sprung, and on searching found the fine-fingered pawprints of the raccoon.  Other men might have sworn, but he chuckled.  Even though he lived by the beasts, lived by their deaths, he loved them in a way he could not put into words.  There was a kind of understanding between them, he thought, and he respected it.

As winter's early evening darkened the sky, he built a fire and spitted two rabbits for his dinner, then read his letter to Emma over again while they cooked.  Perhaps he could find someone at the trading post who could carry it along to town, but likely he'd reach her again himself before the letter ever did.  Still, it was a comfort to talk to her, even if only on the few scraps of paper he'd saved from his supplies.

He tucked the letter away and looked up to see a figure standing at the edge of the firelight, a pale gray pelt against the blue-shadowed snow.

He tensed and reached for his rifle.  He did not raise it, but the cold metal under his fingertips allowed him enough reassurance to be able to think.  He had heard stories of the wolfen at the trading posts and forts, tales told at the firesides of lonely cabins--but he had never seen one before.

They were not always dangerous, the stories held.  Especially not when they were alone.  But a man had to be careful out on his own.  A pack could hide easily in these woods, unseen until the right moment...

It came closer.  It walked in a hesitant half-crouch, stealing forward, then cringing back.  The smell of the roasting meat had drawn it, he figured.  It was close enough now that he could make out the ears held erect, the slope of the muzzle, and the hands with their padded fingertips and dark nails.

Closer still.  It was trembling, he saw now--from cold or weakness, he couldn't tell.  Then it edged full into the fire's glow, and he blinked in surprise.

It, he saw now, was a she, her breasts full and hanging, the dark nipples wet.  Her eyes were pale gold, the color of new honey, and she was so thin that every bone poked an angle under her silver-gray fur.  She wore only a scrap of skin tied about her waist--rabbit, he noted--and he wondered if it had some purpose as a sign of rank or place, as it did nothing to cover the vague cleft between her legs.

He had heard they had a language, a kind of growling, yipping speech accented with posture and signs.  He knew none of it.  All he could do was force himself not to stare, afraid it might provoke her.

After a moment, though, he realized there was no need to worry on that point.  Her own attention was focused solely on the meat as it dripped its juices into the sizzling fire.  He saw her salivate, saw the hollow of her belly.

Rabbits were thin this time of year, but one would be enough to keep him until morning.  He took the meat from the spit, singeing his fingers in the process, and held one of the rabbits out to her.

She flinched back at the sound of his voice, but the meat was impossible to resist.  She snatched the rabbit from him, retreated to the edge of the fire, and tore into the meat.  It was gone in a few moments, and he heard the bones cracking between her teeth.

He glanced at her chest again.  Had she been human, he would never have dared, but he found that her nudity didn't even register as such.  She was nursing, so that meant there were pups in a den nearby.  Given her current state, it was a wonder she still had milk to give.

He took a haunch from the second rabbit--hesitated--then held the rest out to her.  She took it as eagerly as the first, though he noticed she ate it more slowly.  When she was done, only the clean, tooth-scarred bones remained.

Now that the food was gone, he expected her to leave, but instead she stayed by the fire, inspecting him with frank curiosity.  He wondered if she had ever seen a human before.  So few people came into these mountains, and the wolfen were known to keep to themselves.

Her gaze fell then on his pack, and she approached it gingerly, sniffing at it as a hound might.  Then she pulled back a bit, and her eyes darkened.

The pack's ties gave her a little trouble, but soon she had it open.  She lifted out his last steel trap, the one he hadn't had time to set before sundown.  She held it, turning it this way and that in the firelight, sniffing it, touching it with her tongue, running her fingers over it, all as if searching for something.

Then she stood and flung the trap far into the woods.  He did not hear it fall into the snow.

She returned to the pack, focusing now on the tied bundles of furs, cutting their bindings with her teeth, rummaging through them, smelling them, tossing them aside.  He winced at all his careful work undone but made no move to stop her.  What was she looking for?

At last, when all his furs lay scattered in the snow, she slumped to her knees, head low, eyes closed.  A low sound came from deep in her throat, half whine and half sigh.

He knew nothing of wolfen speech, but he didn't need words to understand the weariness, the hopelessness in the haggard line of her body.  This was not mere physical weakness, he knew; this was the weight of sorrow.

And then he knew what she must have been looking for, and he fought a rise of hot bile in his throat.

He had once heard another trapper say that the wolfen pups fetched good money for their hides, if you could get them young enough, if you could take them from the den while the bitch was away--their fur, he was told, was so fine and soft, it was just the thing for rich ladies' gloves...

He must have made a sound, because she turned her empty eyes to him.

"Your pups," he said softly, holding his arms to mimic cradling a child.

She looked down, then after a moment, slowly raised her head again to look at him, her eyes searching his.

She seemed to understand.  At last she stood and trudged through the snow, out of the fire's warm circle.  He wanted to call her back somehow, but he didn't.  Instead, he watched her disappear into the dark trees, and hours later, when he heard her howls rise into the bitter air, he could not have said if she was mourning for her lost young, or for herself.

Rafe dropped a bundle of furs onto the counter.  "And I want what I'm due," he said.  "There's hides here worth their weight in gold."

He nodded absently in reply and sorted through the pelts, keeping a tally on a bit of paper.  Mink, beaver, raccoon, fox...  In his mind, he saw each creature as it must have been while still alive, so fleet and cunning and whole.  For his part, he preferred the store work now, except when the sun slanted in and hit the jars of wild honey so they glowed on the dusty shelves.

Then his fingers brushed a scrap of pale gray.

He swallowed.  His vision went black at the edges, and a high-pitched buzzing droned suddenly in his ears.  He fought to keep his voice from shaking.  "And this one is...?"

Rafe grinned.  "Best of the lot.  Only got the one--the bitch made off with the other.  Shame we can't hunt the big ones too.  She'd have made a fine rug, that one."

The buzzing in his ears became a roar, and the next thing he knew, Henrik was holding him back while Rafe laughed.

He struggled, but the logger's grip was firm.  "Don't," Henrik said in his ear.  "Don't, hear me?  You don't need trouble.  Think about Emma.  Think about William."

Oh, but William was all he could think of--his own baby boy, his skin so soft, his eyes still opening up to everything around him.  Had that pup's eyes been open yet?

Rafe was gone.  He felt Henrik release him at last, and he staggered out of the store into the melting snow.

The town was still and silent, and he imagined he could hear it.  Somewhere high in the mountains, there would be another bitch--

--singing her heart's death-song to an empty sky.

Wind chilled the tears on his cheeks.  He threw back his head and howled.