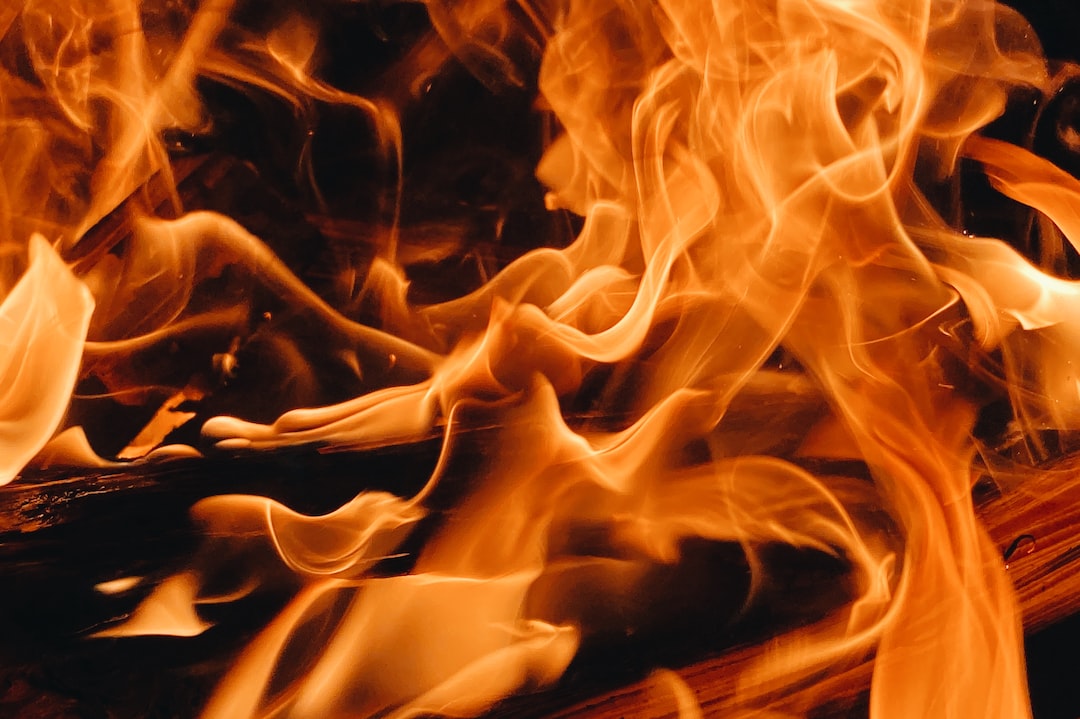 Photo by Max Kukurudziak via Unsplash.

From the author: A beautiful, musical woman pulls up on a motor-bike, as Rabbit tries to decide what she can do to help her brother, SpringHeel, who is trapped in a burning city.

Rabbit sat on the stairs and tried to make a plan.

She was half-way down from the massive city doors. Thirty feet before her was the small archway which demarked the divide between the city and the great plains beyond, a sea of brown and green grasses clear to the horizon. Thirty feet behind her, smoke rose over the great door, and heat radiated from behind it. The city was on fire. Where was SpringHeel?

She first saw the cloud of black sooty smoke on the horizon, much darker than the smoke rising from the city, then heard the noise of a combustion engine. Someone was approaching from across the plains. Not her brother, he was supposed to have been in the city already, and, like her, he would never need a vehicle to get across the plains. Rabbit stood and walked down the stairs, carefully. She leaned against the inside of the archway and watched the vehicle approach. As it came closer she realized that it was no typical engine sound. The growling was a tune of sorts. There was little variety to the sounds, just a few different notes of growling. Under that sound was another, more complicated, but fainter. A pipe-organ?

The machine itself was visible soon, and she could see it was a simple leaner; Just two wheels, a motor and a seat. Riding it through the grass must be terribly uncomfortable. Rabbit thought back to the message from her brother. It had come across the plains with a messenger on a similar vehicle. She took the small slip of paper out of her pocket, and looked at it again, as if it would impart some additional wisdom that she had previously missed. "Something is about to happen here. Come quickly. -SHJ" was all the paper said. She glanced over her shoulder at the rising smoke filling the air, and dropped the paper back into her pocket. She hoped he was okay.

The leaner came upon the city gate more quickly than Rabbit had expected. The rider was soot-covered, and wore a large box on her back, the straps crisscrossing over tightly fitted clothes which looked like they would belong on a bandstand if they were cleaner. The woman stopped the machine about ten meters from Rabbit. She lifted a pair of goggles from her eyes, revealing pale, non-sooted skin beneath. She glanced at Rabbit and smiled before kicking down the leaner's brace, and swinging a leg over the machine. She lifted the seat, revealing a cargo space, from which she drew a wicker basket filled with colorful orbs. From this angle, Rabbit could see, even through the soot, the box on her back was a wood and brass instrument with pipes and cranks. It had been a pipe-organ she had heard. Rabbit tensed, this might be one of the people SpringHeel was always talking about. The woman turned away from the leaner with the basket in the crook of one elbow and looked toward the burning city.

"Guess I'm too late." she sighed. Her voice was melodic and clear and pretty. It didn't fit with her blackened presence. She walked up to the arch, casually, seemly unsurprised at the destruction before her. She smiled at Rabbit again, then cocked her head to one-side, and said, pleasantly, "You look so familiar."

"I'm not from here." Rabbit said flatly, breathing for the first time since she saw the organ.

The woman looked her up and down, then grinned slyly, as if she'd been let in on a secret. "You must be SpringHeel's sister!" she said, "You have the same eyes."

"That's not usually what people notice we have in common first," Rabbit said, gesturing to her digitigrade legs.

The woman waved this away. "I've heard about you, but wasn't sure how much to believe." The woman took a step closer. "Is it true you are also named Jack?"

"I'm called Rabbit," Rabbit said without really thinking. It was tough to concentrate with that smile pointed at her.

The woman began to laugh. "Of course you are!" she trilled. Her laugh was deep and genuine, and her body shook with it. Rabbit could see that under the soot and the organ, she was buxom with shapely hips. Rabbit felt her face grow hot, and looked away to keep from staring. This woman was an enemy, she couldn't let herself get distracted. "Don't be embarrassed!" the woman said. "Jaqueline is a lovely name..."

"I'm not..." Rabbit started, but wasn't sure where to go. She was embarrassed, just not for the reason the woman thought.

"So, Rabbit," she purred the name in a way that sent a shudder down Rabbit's spine. "Can you do what SpringHeel can do?"

"I... I do something different..." Rabbit stammered.

"I suppose, if you could, you'd be over that wall by now, wouldn't you?" the woman said gesturing toward the city "Well, I'd love to see what you can do..."

Rabbit glanced at the city doors, wooden, immense, and barred from the other side. Where was Jack?

"So shy," the woman said, "not at all like your brother, always showing off at every opportunity. Here," she said, pulling a cord that dangled from her pipe-organ, "Let me help you."

The organ began to play, and the woman began to move with the slow, distant sounding music. Her body swayed with the rhythm, her hips and shoulders twisting and rocking. She reached up and pulled a stick from her hair, letting brilliant blue curls tumble down over her shoulders. Then she began to hum. Her voice blending perfectly into the organ music.

Rabbit was enthralled. She had never heard or seen anything half so beautiful as this performance. She almost didn't get out of the way in time.

Without pausing the performance, the woman had taken one of the colorful orbs from her basket, and placed it into an opening in the organ behind her. The organ launched the orb toward Rabbit. Only the slight foomp sound it made as it launched saved her. She noted the barely perceptible sound, and looked toward the pipes just in time to see the projectile.

The explosion wasn't loud. It was a small fireball that blackened one side of the archway, and left the grass smoldering, but it would have killed her. If her ears had not been so keen... If her legs had not been so fast...

The music continued, but the humming and swaying stopped. Rabbit was watching her attacker from behind, and the woman turned to find her. "Oh my!" she exclaimed, "That is something to see!" she laughed that beautiful laugh again, somehow in time with the organ music. Rabbit nearly fell into it. She couldn't keep her eyes off the woman. "Again!" she said, and another orb launched toward Rabbit. Foomp.

"You're more fun to dance with than your brother," she laughed. "He would have tried to pounce on me by now."

So tempting. Rabbit needed a plan, and staring at the dangerous woman while dodging her bombs was not a good one, long term. Rabbit was fast, but her energy was not unlimited. "You're one of those musicians my brother complains about. The Melody Makers?"

The woman's smile faltered for just a moment, "The Harmonizers!" Foomp

Rabbit ran. That one was too close. She was wearing out. She needed to get into the city.

Rabbit ran straight to the Leaner.

Rabbit ran to the stairs. The Leaner took the brunt of the explosion, one of the wheels tearing loose and rolling out into the grassland. The music faltered for a beat and TuneMistress screamed. It was a shill, piecing cry of anger, but somehow it was still musical. When she turned, Rabbit was expecting her anger to show through as ugly, a reflection of her inner, terrible self, but she was wrong. The smoldering look made Rabbit's face hot again. She had to snap out of this.

Rabbit ran up to the door.

Rabbit ran just a few steps out of the radius of the blast, then shot herself back toward the door. She burst through the weakened timbers, and into the city.

It took all of her willpower not to look back at the TuneMistress, to see what defeat looked like on her.

SpringHeel was somewhere in the city, and he needed her help.

This story originally appeared in Indestructible.