Andrea made this story available for free. Say thanks by sending them a tip.    Send Tip

Beneath the Bark Her Heart

Someone has been planting a tree for each girl who goes missing.

There’s an apple tree for Kate, who left band practice and never showed up for class on Friday. A maple sapling appeared by the fountain after Lindsay missed her shift at Plato’s Café. A pair of new willows were surrounded by freshly turned dirt after Maddie and Rumpa disappeared on a run.

Elizabeth lets her boyfriend drive her home after lit club. She’s yawning, hitching her bag on her shoulder; he’s tapping on the steering wheel and worrying, more than her father does. Keeps asking her if she keeps her phone charged. If she has that app, the panic button one. Should he walk her to her door? Pick her up in the morning?

Elizabeth stares out the window. She feels like she did during finals, slowly consumed by a massive project. This one is big, though. Bigger than ever before. Her house sneaks up on her before she expects it, but when the car stops she doesn’t move.

"You know tomorrow is a year since the attack that put Daphne in the hospital?" Elizabeth asks. Neither of them need reminding that the man was never found.

Before he speaks, she kisses him goodbye and exits the car, walking up the path to her front door. Her boyfriend watches until she’s inside, and Elizabeth doesn’t look back.

Early in the morning, when Gabs is getting ready to leave for swim practice, her brother comes out of his room, rubbing the back of his head until his hair sticks up. "Do you want a ride to school?"

"Your car smells like feet," she says, and sets off for a jog, mace dangling off the keychain in her hand.

Under her breath, Gabs practices new combinations of words. The neighborhood is quiet so early. Better than running after school, when more cars would be out, more people to slow down as they pass her. Wind rustles leaves on trees, and at the stoplight Gabs stares up into the branches.

She turns, not left to school, but right. To Daphne’s house. She imagines that she can already smell pine needles in her hair.

The Spanish teacher clears his throat six times in the first ten minutes of class, double-checking his attendance tally.

"Is Gabs sick?" His eyes dart from girl to girl.

The girls stare back, as though he implied nothing else by the question. Elizabeth bends her head over her notebook to scrawl a note to Daphne—Enough practice?—who reads it and nods. They both write enough notes to demolish what's left of their spiral notebooks, while the rest of the class conjugates coger and exigir and proteger.

Scraps of paper folded into complex shapes drop from hand to hand. Hands with manicured nails and marker-painted ones, with calluses and scars and smoothly soft skin. Daphne presses a note into Ada’s hand, who started the year with a new name and pronouns that the teachers struggled with and some students ignored.

After lunch the intercom crackles and the principal announces an assembly in place of final period. Ada is long gone.

The principal stands in front of the bleachers, looking out at the students. He steps aside and whispers to his assistant, then comes back to the microphone. He looks again, looks harder, but no amount of looking makes any girls appear.

The year before, Daphne came back to school with bandages, bruises, a splint, and a furious, shattered look behind her eyes. That summer, she vanished to a grandmother two states away, for fresh air and long hours of silence in the garden. For dirt under her fingernails, piles of weeds, the wide expanse of nothing beyond grandmother's plot of land. Slightly arthritic hands that wove through empty air as words were spoken, in the same voice that told Daphne what was a weed and how to shuck corn. The air whistled and changed.

In the scars on her hand and arm, lines from punching through glass to get away, Daphne saw a path. The scars seemed to fractal, like a growing twig.

A week after her birthday, Daphne returned to the neighborhood, whole. Her eyes were greener, and calmer.

Daphne’s Corolla idles outside Elizabeth’s house, where Elizabeth is trying to say goodbye to her little brother without telling him it's goodbye. Not that Daphne would call it that. They're not going anywhere, not really. They can change back anytime they like. Anytime the world will have them.

Daphne wears lipstick the color of a Japanese maple leaf. She taps at her phone with her middle finger, her index never quite the same since the attack.

One by one, her texts stop getting responses.

The car will be found one mile west of school, in the heart of the new forest.

This story originally appeared in Recompose.

Andrea made this story available for free. Say thanks by sending them a tip.    Send Tip 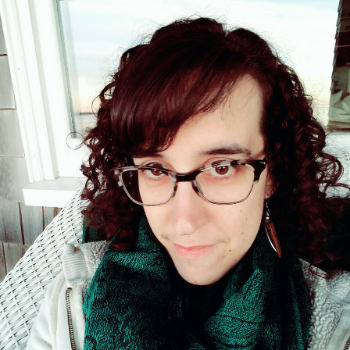