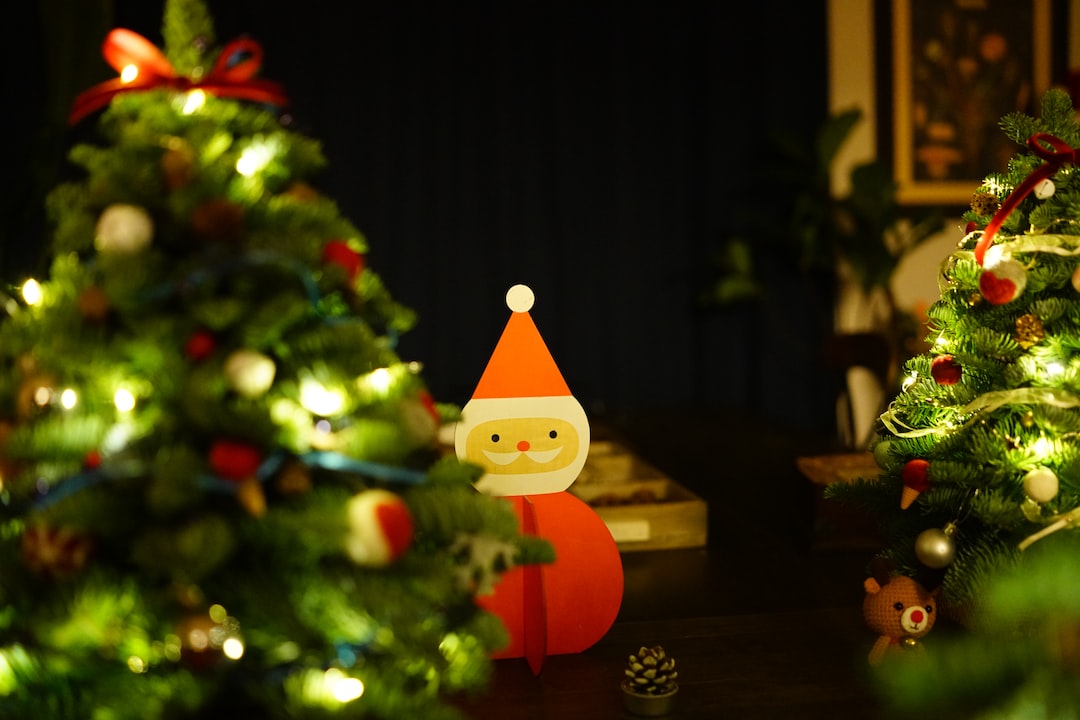 Photo by coincidence via Unsplash.

From the author: No one thinks about Santa's economic impact, but you can be sure that some people, some very bad people, aren't happy that he gives all those toys away for free.

I get the unusual hits, so I wasn’t all that surprised when a Tampa mob boss who was up to his elbows into skimming Hasbro® and Mattel® profits contacted me to take Santa down.  The fat guy’d been cruising on luck for years any way.  He’d cold cocked the union movement among the elves, and he’d cut the dock workers and truckers out of his operation from the beginning, so he probably knew it was coming.

No animosity on my part, of course.  It’s just a contract.  The fat guy’s on the ball about stuff like that.

That Santa, though.  He’s a tough old son of a bitch.  I suppose I should have known that.  He’s been a long time on the job.

Seemed like a pretty easy score to me.  I mean I’ve had to do some doozies.  Picking off the Easter Bunny at 500 yards, for example.  That took artistry.  And the tooth fairy had eyes in the back of her head, but the fat guy, hell, he’s as big as a house, and I knew where he’d be and when he’d be there.

So I picked out my gear.  Now a lot of guys go for single-shot rifles.  Those finely bored Mausers are pretty popular.  They break down easy, are dead accurate at any distance, and depending on your load, they can go for high penetration or knock down.  I like the .45 caliber El-hal-Alamine however, a Turkish magazine loader that can zip twelve 540-grain titanium jacketed hollow points in four seconds on autoload.  Of course, no one would clear the magazine all at once: it kicks hard and to the left, but I can put all twelve shots into a four inch circle at a two-hundred yards in fifteen seconds if the wind is calm.

To hell with style points, I say.  You’ve got a job to do, and you want to make sure it gets done.  Nobody pays for a wounded mark, and there aren’t any bonuses for saving on ammo in this profession.  I don’t care what the movies might make you think.

So I set up in a back yard tree house in Arden Hills, a pricey, Chicago subdivision filled with fake colonial two-stories.  From my vantage I had a clear bead on three chimney’s, although I knew that I’d only get the one chance.  My scope was a 60 power Verstaadt-Bern with a good anti-fog polish on the lenses.  Cold weather set-up, I couldn’t risk condensation at a key point.  Street lights would give me plenty of light I figured.  What I didn’t figure on was the snow.

About 11:30, the front pushed through.  I had a sleeping bag wrapped around my shoulders, and a thermos of Brazilian Black laced with a touch of rum beside me.  Big, sloppy wet flakes fell at first.  Christmas lights on the houses up and down the streets wrapped themselves in a layer of fuzzy color and visibility dropped right off.  I didn’t really mind at first until the snow swallowed my view of a suburban sweet tart whose unshaded bedroom window a block away I’d been scoping pretty regular.  Guess it hadn’t occurred to her when she went to shower that a guy with time on his hands would camp out in the neighbor’s tree house.  Then pretty soon all I’ve got for sure is the back of the closest house and its chimney.  I’m getting nervous because I don’t have time to set up somewhere new, and it’d be twelve months before the old boy would come out again.  No hope for an off-season score.  He’s got that North Pole hidey-hole locked down tight as Fort Knox.

But the temperature kept dropping, and the flakes turned into those dry, little pellet things that sound like sand bouncing off your hat.  I could see better, but it was darn cold, and the wind kicked up.  I checked my load again.  It’s a habit.  Don’t want to be lined up for the chance and click on an empty chamber.

Somewhere I hear some caroling.  Group of church kids, I suppose, since first it’s Hark the Herald Angels, and then Silent Night, and then Little Town of Bethlehem.  I’ve got the piece resting on my knees, pointing in the right general direction, but  my hands are jammed up under my arm pits.  Can’t wear gloves.  Not even those thin-leathered Italian ones.  Just never have been able to do that.  You see a lot of wrong stuff in movies about aiming a rifle, and they all make it look easier than it is.  It’s in the squeeze, you know, and if I’m wearing gloves, my squeeze is off.  Even at a hundred yards, I could miss.  So now I’ve got all kinds of things to worry about.  It’s getting way cold, and I’m thinking about temperature changes in my scope and barrel.  Hell, the firing mechanism is filled with high tech, mono-filament carbon alloys, and I don’t know if they’re tested at ten-below.

Then, there’s the wind.  It’s steady, and not all that bad (if it weren’t the dead of a Chicago winter!), but it’s a cross breeze.  On top of that, the visibility might go again.

These mob guys, they don’t like disappointments.  Hell, I can just see me now saying, “It was cold and windy.”  And he’d say, “Do you know how much you cost me this year?”

I hear those Tampa guys don’t kill you before they dump you in the bay.  They slice you up a bit, drop you a couple of miles off shore, then make bets on how far you can swim before the sharks get you.

So I’m sitting there with all these bad thoughts running through my head, and it feels like my butt is turning into an ice sculpture, when the fat guy makes his appearance on the roof across the yard.  It’s eerie.  Not a sound.  No sleigh bells.  Nothing.  One minute it’s a bare roof with snow curling around the chimney, and the next there’s a regular stock yard snorting steam into the frosty air, a honking big sleigh, and the fat guy slinging a bag over his shoulder.

I scope him.  Cross hair’s over his heart.  He’s got tiny glasses perched on his nose, and he’s checking this list he’s holding.  The snow is bad–it’s screwing up the light--and he’s mostly a silhouette.  I’m afraid I won’t get the shot before he scoots down the chimney, but he checks the list twice, and I adjust for windage and squeeze real gentle.

He moved.  The shot went anyway.  I couldn’t hold it back.  The reindeer start, but they don’t run.  Their heads are up, ears up.  Disciplined: they don’t go anywhere, and the fat guy is behind the chimney, peeking over the top in my direction.

I drop the cross hairs on him and take four more chances real quick.  Three in the wind and one powders a hunk of mortar off the corner.  He’s gone.  I’m hoping that maybe I got him and he’s tumbled off the backside of the house, but I know I didn’t.  You can hear a bullet hit.  None of these did.

So where is he?  I scan the roof.  Nothing.  Just shadowy reindeer and the sleigh.  Windows in the house are dark, but lights are popping on all over the neighborhood.  Don’t hear any caroling now.  Then a curtain moves.  Streetlight catches it.  It’s him.  How’d he get in?  I swing the rifle down.  Too late.  He’s long gone.

So I’m thinking, where’s he going to go next, and all I figure is that he’s got to come out the chimney.

I settle in, brace the rifle and hold it steady on the target.  Even in the blowing snow, it’s clear.  It’s spooky how bad the light is, though.  If it weren’t snowing, the street lights would be enough, but everything is dark and indistinct now.  The sleigh’s a hump in the snowy eddies.  The reindeer are black in black.  My eyes water a little, so I blink them dry.  Don’t feel cold now.  My cheeks burn, while my hand is calm and cool.  Finger rests on the trigger.  Gun stock firmly placed.  Head a bit to the side.  Everything focused in on that bit of roof and the top of the chimney.

He’s got to come.  He has no choice

Then, there’s movement.  He pushes out, a rounded silhouette.  It’s like candy.  I empty the magazine, seven flat reports, starting from the top and working my way half way down the brick and mortar.  I’ve got the penetration.  Titanium jackets don’t even flatten on the way through.

I watch for a second.  He’s slumped over the edge.

Things are getting serious in the neighborhood though.  Lights on all over the place.  Some distant shouting.  Doors opening.  A couple of sirens.  Wind picks up again and the snow is fierce.

My gun breaks down in three sections and goes into the case.

A job goes in parts: the setup, the chance and the getaway.  I’m getting ready to go down the tree when I glance up at the house.  Something’s moving at one of the windows.  It opens.  I grab just the scope out of my case and check it out.

I should have known.  After all, he’s been in the business a long time.  It’s the fat guy.  He looks my way and waves.  How’d he know I’d have the gun put away by now?  Then he climbs up the side of the house.  Pretty creepy to see a guy that big move like that.  Then he pulls his bag out of the chimney.  He piles it onto the sleigh, and he’s gone.

You’ll pardon me if I thought his “Ho, ho, ho,” was a little mocking.

Five hours later, I unlock my condo, thinking about how much money I have deposited in accounts out of the states, and wondering if there’s any chance of booking a flight during the heavy, holiday travel season.  I turn on the lights, and there, nailed to my mantle, is a Christmas stocking.  I live by myself, and I don’t do Christmas decorations.  I approach cautiously.  In it is a brand new, Baush and Laumb night vision rifle scope.  I turn its polished mechanisms over in my hand.  If I’d predicted the snow, it’s the tool I would have needed to make tonight’s hit.  I’d have known that it wasn’t the fat guy coming out of the chimney.  Despite myself, I laugh.  You’ve got to appreciate a guy with a sense of humor.

And the next day, while I’m talking to travel agents from my cell phone, and keeping on the move, I learn my Tampa employer got a Christmas stocking too.  Santa paid him a visit. He knows who’s been naughty and who’s been nice, you know.

Only his present wasn’t so funny.  Stocking blew up in his face.

Took it right off, I hear.