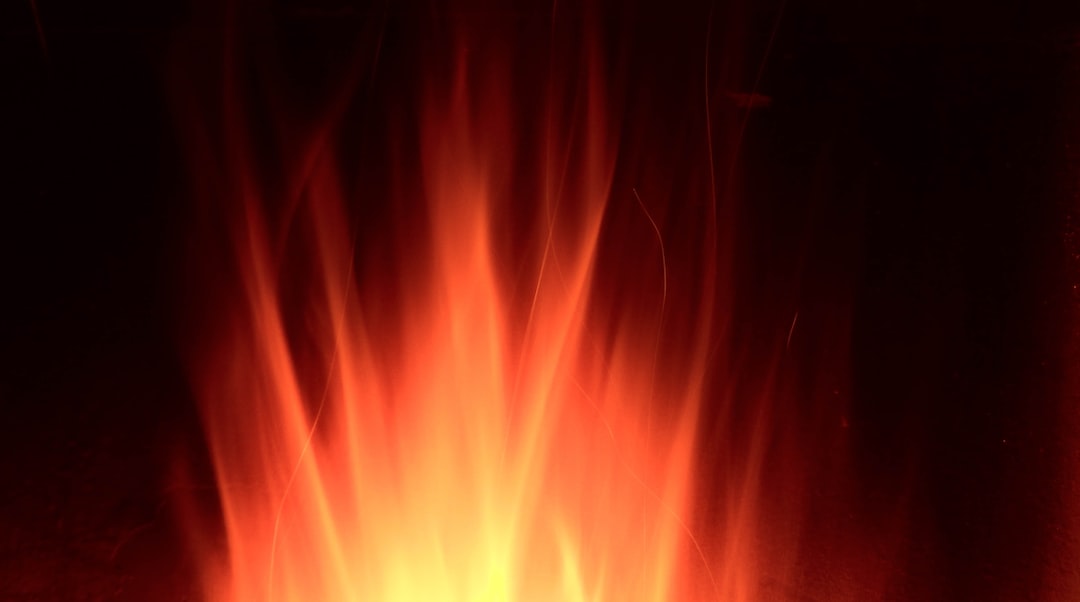 Photo by Arnau Soler via Unsplash.

From the author: A little girl has a big day.

Cold, breath fogging, making a sheen of ice on the glass, toes achy in layers of stitched-up socks. Freezing up on Five, everybody wore all their clothes, even Grownup Judi wore bags over her stumpy half-hands.

Iris, too young for troubling memories of a better world, went down to Three to see THAT. A mouth, that's what THAT was. A face was painted on the wall around THAT's mouth. White round eyes. Big letters said *THAT*I*AM*. Painted eyes, painted words, nothing mattered but the mouth, THAT's mouth.

THAT had a fiery heart, down there somewhere.  Heat poured out, a red glow of heat. Maybe that's what sunlight used to feel like.

Deep-down thump, a heartbeat. Iris held the flap open and warmed her face.

A word on the metal flap, INCINERATOR. Iris asked Grownup Brian about it. Like grownups always did he only half-answered:

"You know, they made these incinerators against the law in apartment houses, back before ...." He trailed off and went back to sawing frozen street meat into thawable chunks.

"Before what?" Iris bugged him 'til he answered.

"Before the world got a change in management." He laughed, but not like a joke.

Grownup Brian was afraid, he was afraid of THAT, all the grownups were, Iris knew the smell of fear just like she knew everybody in the dark, everybody had their own smell.

Even up on Five where she slept you could feel THAT thrumming and grumbling. Ma'am once said cats used to make a sound like that when they were happy. Iris didn't know what cats sounded like, only what they tasted like thawed out and cooked in the pot.

Grownup Karl skinned one of the thawed cats once, he stitched the skin up into a puppet. He used to make it say "Good morning meow!" every day, long after it stopped being funny and just became part of the routine. One day he got got by bloodcrabs, they ate his insides, and then Iris looked for that puppet but never found it.

THAT lived in the hallway down on Three. Two was all boarded up, Four was grownups, Five was where kids and babies lived.

The stairs went up farther than five, but the stairway was blocked up with pieces of bricks, cemented together. Nobody talked about it. Iris heard somebody went all the way up, once, to the roof.

She wondered about outside. The windows let in a little light but often they were iced over. Or covered with black shapes as big as your hand, clacking all over the glass. Bloodcrabs. Nobody went out those days.

There used to be more kids. Grownups lived on Four with no doors or walls, just a big space with pillars and the outside brick walls. Mattresses were nailed up all over the wall to hold the heat. Grownup Trey called Four the Padded Cell.

Grownups slept in piles against the south wall. The opposite wall had all the windows bricked over, and concrete patching where something busted through once.

Grownups made supply runs, they went through the lobby, out. Sometimes grownups went out, never came back. Gone.

Mika was a kid, little and weak, she got sick once when it turned so cold Grownup Brian said there was dry ice coming down outside. Everybody squeezed in a nest of mattresses, children in the middle.

Mika was hot with fever, the grownups passed her around and someone said she was a hot-water bottle. Iris tried to stay away with Mika but she couldn't, and when she woke up Mika was gone. A red glow shown up from Three, from THAT.

THAT had a voice.

Out of THAT's belly a rumble, a roar, filling the whole building, it was almost words. Iris thought she heard her name.

Warm! Warm! Not just bodies but real heat, up from the floor, warming the air in her lungs. Ice on the windows fogged, vanished. Grownups peeled off layers of clothes. For days it didn't get cold.

THAT gave. THAT was love. Real love, warm like blood, not empty like all the grownups trying to give love but stinking of cold fear and broken in pieces behind their eyes.

Ma'am painted over Mika's name on the name wall. Gone.

Iris was seven and a half now, six months short of a grownup. Grownup Brian got got, they only found half of him, Iris heard. They said it was the left half.

Another bad cold spell. Baby 23 coughed all night, then it was gone in the morning and the whole building was warm and red, thanks to THAT. Roaring, humming. No fear.

It froze again, windows hot-cold, they'd burn your fingers. One week left, then one day, Iris didn't want the night to go, didn't want morning to come. She said "Grownup Iris" to herself, didn't like it.

Under blankets she dreamed about Mika and all the gone ones, she saw them all together, in where it was warm and red, warm always, down in THAT's insides.

Iris came awake, not in bed but standing barefoot, in the hallway down on Three. Barefoot was dangerous, you could lose toes, but Iris wasn't cold.

There was just one light, a square of bright red lines. THAT's mouth. Where she belonged.

She would climb in. She pushed his mouth open with both hands and red heat poured out, pulsing, alive, alive like a baby's live skin.

From inside THAT, deeper than she ever heard it before, a throbbing, swelling, filling her head. Warm air on her face like love.

Yellow light shone in Iris's eyes, making her blink, only now fully wakened. It was a flashlight, she'd seen one once, they were precious, almost never used.

Ma'am's thin face, her hard grip pulling Iris away from THAT. Above the thrumming roar, Ma'am's hoarse voice shouted.

"I gave you one already, we fed you, god damn you, our babies went down your fucking maw!"

The yellow light from the flashlight shrank and faded. Ma'am held Iris captive, their faces blood red in THAT's light pulsing with his heartbeat, until the iced-over windows grayed with a new day.

She'd never see Mika now, or the others, she knew it, she wouldn't ever live in THAT's warm, warm red, wouldn't sleep safe inside with his heartbeat thumping through her, in THAT's embrace, inside the only thing she wanted that wanted her back.