Dominica made this story available for free. Say thanks by sending them a tip.    Send Tip

How I Lost The Girl

From the author: A brief tale describing the dating habits of San Francisco's hippest monsters.

Elliot and I don’t normally like the same type of girls. I like troubled girls because I am helpful and stupid. He likes girls that don’t need him, which is one of the many reasons he is so forlorn all the time.

I met her first. She was a friend of a friend, we were out at a bar. She was beautiful: long black hair, stone grey skin, fingers like claws. It wasn’t until I got close enough to kiss her that I saw her pupils were slit like a cats, and when I kissed her, I felt her teeth were fangs. I asked her out to dinner and she said yes.

“Tomorrow,” I said, “I want to see you tomorrow.” I meant it. But also, playing it cool is over. It’s all about earnestness and sincerity these days.

“Fine,” she said, like she hadn’t heard that playing it cool was over.

For dinner, I took her to Mission Cheese, which is pretty much exactly what it sounds like. It’s a cheese bar in the Mission. She didn’t know anything about cheese, acted like she never had it before, so I ordered for us.

We waited for our cheese in silence, but not awkward silence. Small talk is not really done anymore, except in the suburbs. Here, in the city, I notice people trying to have more meaningful conversations. If you’re going to talk, you should talk about something real.

“What does that question even mean?” She rolled her eyes at me, but in a sexy, flirtatious way.

“I mean, you look like you might be part-Gargoyle, but you have Catperson eyes, and sort of an Aquamarine-looking snout, er, nose and…” I trailed off, giving her a chance to talk. But she was silent, with a stony stare. She definitely had some Gargoyle in her.

It was silent for a while, but I was okay with that.

“It’s none of your business what I am,” she finally said.

“No, sorry, I mean, I just want to talk about, you know, identity and stuff. Cause I’m mixed too, half Gargoyle and half Cyclops. I’m a mongrel, just like you.”

I shouldn’t have used the m-word. Dogfolk get very sensitive about that.

She was mad at me, but I tried not to let that freak me out. I reminded myself that in this new era of more honest communication, people don’t hide their hostility under fake cheerfulness. It’s healthier this way. No need to be repressed.

Lazarene cheered up when the cheese arrived. She really hadn’t had cheese before. She thought it was genius.

At the end of the night, I totally respected her decision not to sleep with me.

What I did not respect was her decision to go out with my best friend the next day.

We live in a world of new traditions and new ways of thinking, but that doesn’t mean we have to reject everything that came before. Not dating the same girl as your best friend is one of those classic notions that will never go out of style. And since I specifically remember telling Lazarene on our date that Elliot was my best friend in the world, I’m inclined to think she went out with him on purpose just to make me mad.

Elliot’s advantage is that he is probably more handsome than I am. He’s Aquamarine, which means he has a swimmer’s body and that green-blue skin the girls love. He’s almost too handsome.

You don’t want to be too handsome. Examples of people who are too handsome are lacrosse players, Harry Styles, and date-rapists on TV dramas. Too handsome guys are not to be trusted. To keep from being too handsome, Elliot decided to grow strange facial hair.

I found out about Elliot and Lazarene from a mutual friend. I decided to confront Elliot, but not in an angry, hostile way, just to let him know that Lazarene and I had real chemistry and I would appreciate him backing off.

Elliot works at The Mill, which is a place in NoPa that serves only coffee and toast. Some people complain about the price of the toast, which is $10 for one piece. But this is not corporate, mass-market toast. Everything about this toast is artisanal, even the salt they sprinkle on top is artisanal. I think $10 is cheap for the best toast in the world. The Queen of England’s toast is not this good, I guarantee you.

I decided to stop by the café for some toast and a friendly man-to-man chat with my best bud. But Lazarene was already there. She was ordering cinnamon toast.

I exhaled loudly, both to telegraph my presence and convey my annoyance at the whole situation.

“Lazarene, I don’t really think it’s cool that you are going out with my best friend,” I said.

Elliot’s face is hard to read because he is stoic, but to me he looked apologetic.

“Is this about last night? It was just dinner and a little bhangra dancing. Nothing more than that.”

“You don’t want me kissing other guys, is that it?” said Lazarene. She grabbed Elliot by his collar and kissed him right on the lips. Elliot immediately turned into a frog, so if she was doing this to make me jealous, then it had the exact opposite effect.

“Oh my god, what do we do?” asked Lazarene. Here was my chance to show her how well I handled a crisis. I put Elliot in a take-out container and brought him to the Emergency Room.

I didn’t expect to be taken seriously. How could I convince them that my best friend had turned into frog? How would they know that I didn’t just take an ordinary frog and put it into a take-out box?

But no, the doctor believed me.

“There’s this virus going around,” the doctor said, “It turns people into their familiars. It is passed around by kissing.” I was blown away. All this time I’d known Elliot and I’d never realized that his familiar was a frog. Wow.

The doctor said that there was no cure and that it probably wasn’t fatal. He said to let the disease run its course. In the meantime, I vowed to take the best care of Elliot that I possibly could. I work in tech, which means I barely have enough time to eat toast and date girls, much less set up terrariums. So I hired someone do it for me. She put the terrarium in the living room of the loft I shared with Elliot. I instructed her to make it the nicest terrarium in the world. So she did.

The terrarium took up almost the whole room. It had plants, rocks, a waterfall, and a wishing well.

Lazarene felt the whole situation was her fault and she was right. I figured I had some natural immunity against the disease. She said she wasn’t showing symptoms because she didn’t have a familiar. She suggested we put other frogs in Elliot’s terrarium.

“Maybe if he kisses one of those frogs, he will turn back into a human,” she said. But it is actually hard to get frogs to kiss each other. Eventually Elliot turned back into a human on his own. The disease had run its course.

“Thanks for taking such good care of me,” said Elliot.

“Anything for you, man.”

This was three months later and by that time, Lazarene was long gone. She said she didn’t think I was special. In this day and age, that is pretty much the worst thing you could say to somebody.

“Tell me, what was it like being a frog for three months?”

“That’s the crazy thing, man, I didn’t turn into a frog. What happened was that I swapped places with a frog from another dimension.”

“Really? I thought that frog was you. He had some very intelligent and stoic facial expressions. We had some deep convos.”

“That frog could talk?” asked Elliot.

“No, I mean, I would talk and he would listen. I could tell he was listening by the way he would blink his frog eyes. He was a very soulful blinker, just like you.”

Elliot told me about the time he spent in the frog’s parallel dimension.

“There was magic. Wizards, dragons. I mean, I don’t know, no one spoke English so it was very hard to figure out what the fuck was going on.”

I tried to forget about Lazarene, but it was difficult. In truth, I thought about her every day. She didn’t return any of my text messages. I had no idea what became of her until the day Harry Styles announced his engagement on TikTok.

He was going to marry the girl I was supposed to marry.

I got up early to watch the wedding. It was streaming on Instagram Live. Elliot came in from a late night right when the carriage was pulling up to the church.

I was clutching my handkerchief, my eye was red and swollen.

“Oh man, I totally know what you are up to.” He went over to the TV and stood in front of it so as to block my view. “I say this because I love you. You need to forget about her. She’s out of your life.”

I didn’t quite believe that she was gone completely. Would she really spend the rest of her life married to Harry Styles? Surely she would get tired of his boring and handsome face at some point.

“No. Stop. Done. You are done with her,” said Elliot, “This is just a temporary relapse and you are going to quit it. Right now.”

I looked up at Elliot. I could sort of see Lazarene on the screen behind him, slate grey face barely visible under her tiered veil. Her cat eyes were lined with kohl and honestly it wasn’t her best look.

“They keep saying she is human, she can’t be,” I said, trying to change the subject from me quitting her.

“She’s totally human. What makes you think she’s not?”

“Uh, the fangs, the claws, the slits in her pupils.”

“Are we talking about the same person?” asked Elliot. “Lazarene has none of those things.”

“Really, what does she look like to you?” I asked him.

“So basically, she put an enchantment on me,” I said.

“Can we at least watch them kiss? I want to see if he swaps places with an interdimensional frog.”

“He’s not gonna,” said Elliot, “He would’ve already. You think they’ve never kissed before? He’s saving his kiss virginity until marriage or something?”

Elliot was right. They kissed and nothing happened. I began to plot my revenge on the handsome popstar until I caught Elliot shaking his head.

He was right, he was right. I needed to give it up. I turned the TV off and vowed to find a new girl, one who was nothing like the last. Well, okay, I wanted her to be pretty like Lazarene. But she would be more soulful, more loving. Nicer. Funner. And she would never come between me and Elliot because we are friends for life.

Dominica made this story available for free. Say thanks by sending them a tip.    Send Tip 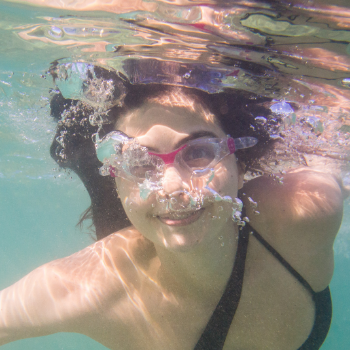