The Order of the Leaf-Eaters 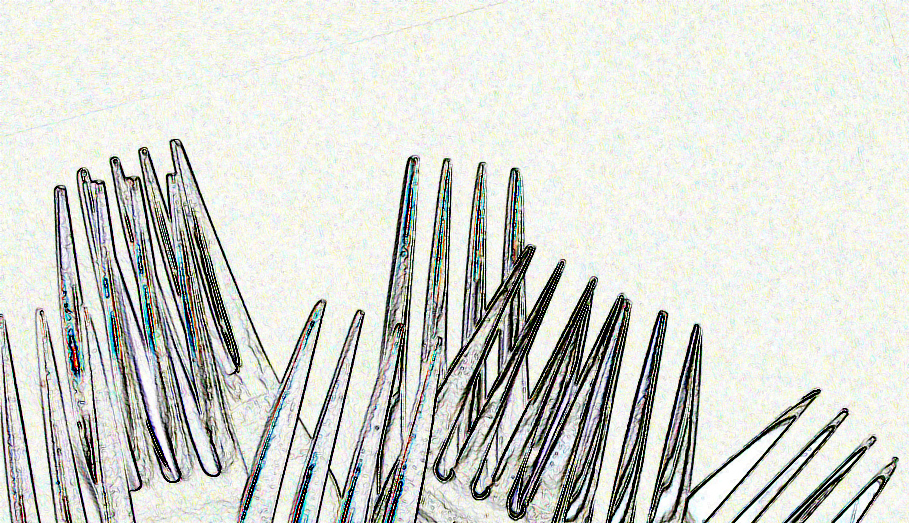 From the author: Brother Larry struggles with his place in the salad world.

Brother Larry is having doubts.

It's not the first time he's questioned his commitment to this cause. It's not the first time he's imagined himself leaping up onto this chair, then onto the table, and running down the length of the row, toward the doors, jumping from table to table, chair to chair, perhaps across the heads of some of the other brethren, if they try to stop him. He would shed this green and white robe along the way, and, adorned only in his boxers, he would toss open the doors, and flip the bird to all those assembled.

He looks to the left and the right, Brother Chaz and Sister Jenny seem to be more at peace than he is, more collected. Sister Jenny even flashes him a quick smile as she holds her medallion, patiently stroking the insignia of the Order of Leaf-Eaters while she waits for their instructions, the six small bowls before her identical to his own, and identically heaped with small piles of saucy roughage.

Brother Guy is still droning on, as he has been for the last 20 minutes, reminding everyone of the importance of the work they do, of the value of their sacred duty and order. Larry glances around the room and wonders if he's the only one who stopped listening years ago. Everyone else seems so attentive. Brother Guy pauses to put on his glasses, and raise his notes up close to his pointed nose, signaling that the real work of the evening is about to begin.

"Our first bowl is an entry from an Eastern Saladry," Brother Guy intones, "the makers propose it as an accompaniment to an entrée of fish and rice." He falls silent, and the only sound in the hall is that of small, silver forks in small, porcelain bowls. Brother Larry looks down at his bowls and forks and sighs. He reaches up and drags his small card and pencil over in front of him, where he can more easily record his impressions.

Reluctantly, he takes the first little fork into his hand, and pokes the contents of the first plate, expertly spearing a representative sample of the contents. As he lifts the fork to his face, he already knows how this one will go. As is the tradition, he first holds the fork up before his eyes, and gives it a small shake to evaluate the consistency of the dressing, and to waft the nose. This selection is baby spinach with feta and beets in a tomato vinaigrette.

He can smell exactly what's going on already, but he tries it anyway. Too little crunch is the first thing he notices, then he is overwhelmed by the sheer tang. The subtlety of the feta and the beets is completely lost under the acidity of the vinaigrette. The whole thing is just how he imagines it would be to eat a tomato that just ate a lemon. This is just the kind of garbage brother Chaz would love, he thinks and looks to his left to see that, indeed, Brother Chaz has already finished the bowl, a bit of vinaigrette dripping down his chin, a smile on his face as he records his impressions on his card.

For a moment, Brother Larry considers spitting this one, but swallows it quickly to get rid of it and to evaluate the residuals of the selection. As he expects, the aftertaste is unsophisticated, and the acid leaves his mouth feeling abused. As a matter of pride, he leaves the taste in his mouth as he records his own feelings on the card. He then takes a palate-cleansing cracker, and pushes the small bowl toward Brother Chaz, who takes it happily, finishing the remaining portion in three quick stabs. Sometimes Brother Larry wonders if Brother Chaz ever chews.

"The next bowl," Brother Guy announces as soon as the sound of tinking forks dies down, "is from a rather popular local saladry, and is intended to accompany an informal picnic with friends." He chuckles a bit along with the rest of the room. They all know that this one will be awful just from the intent statement.

Brother Larry spears the bowl, and brings the fork up. The selection has a low-movement shake, and smells a bit like smoke. It consists of shredded lettuce and carrots with a brown sauce, looking a bit like a spoiled coleslaw. He grimaces, and slides the leaves into his mouth. This time it's too much. He grabs the bucket from the floor beside him and spits. The dressing was probably intended to be "Barbeque" but only landed on "liquid smoke with a generic ranch packet dumped into it" The leaves are iceberg, but they could have been anything for all that they were discernible under the smokiness.

He takes a cracker quickly, not waiting to record his thoughts this time, and is pleased to see that Brother Chaz and Sister Jenny are also not finishing this bowl. He watches as Sister Jenny just writes "NO" in large letters in the second space on her card. Brother Larry rolls his eyes at her lack of devotion, and makes sure to thoroughly document everything that went wrong with the bowl. The Saladry Bastione will have very important decisions to make based on these cards, and the more precise they all are, the better off the public will be.

Brother Guy stands back up at the head of the center table, still rubbing a cracker on his tongue, as is his peculiar habit. He never actually eats the crackers. "That was unfortunate." He declares to another round of chuckles. "Our third selection comes from an up-and-coming saladry in Northern Oregon which specializes in Kale." Groans are heard around the chamber. Kale usually means a trendy disaster. Brother Larry looks down at the third bowl, and it does look like too many things at once, but neither that nor kale itself are reasons to dismiss a dish out-of-hand. Having to raise his voice over the groans and fun-making, Brother Guy continues. "It is meant to be paired with cold chicken or other light fowl."

Brother Larry has more trouble spearing a representative fork from this bowl. There is a lot going on here: The kale is presented with mandarin segments, thinly-sliced strawberries, sunflower seeds, bits of bacon, and slices of fresh red and green onion and coated thinly with what smells like a blood orange vinaigrette. It seems like it must be too much. He gives a gentle shake, and he expects the dressing to be very thin, and he is correct. At the same moment, he is splashed a bit from Sister Jenny's fork, her being a bit less cautious.

He tries the bite then. At first crunch it's all citrusy, the blood orange and the mandarin coming together like a lovely orange mist in his mouth. Then the strawberry asserts its tartness before the tiny spark of salt and smoke from the bacon sets the whole thing off. The kale is perfectly massaged, and perhaps lightly steamed. The onion lends to the crunch, and helps make all the other flavors very brief. The sunflower is noticed only in the aftertaste, as tiny bits stay in his teeth for just a moment after the rest of the bite is gone, serving almost like a mild palette cleanser; A tiny sunflower cracker between each bite. Brother Larry realizes that he's closed his eyes, and opens them to look around. The room is in rapt attention to this construction. He's not the only one surprised by its subtleties.

For the first time in years, Brother Larry's doubts are washed away. This is what his mission has been searching for. This is why they all joined this order, certainly. He tries to start writing his entry for this bowl on his card, but only manages to draw an exclamation point before he has trouble thinking of what to record.

So instead, he takes another careful bite.

This story originally appeared in Allegory.