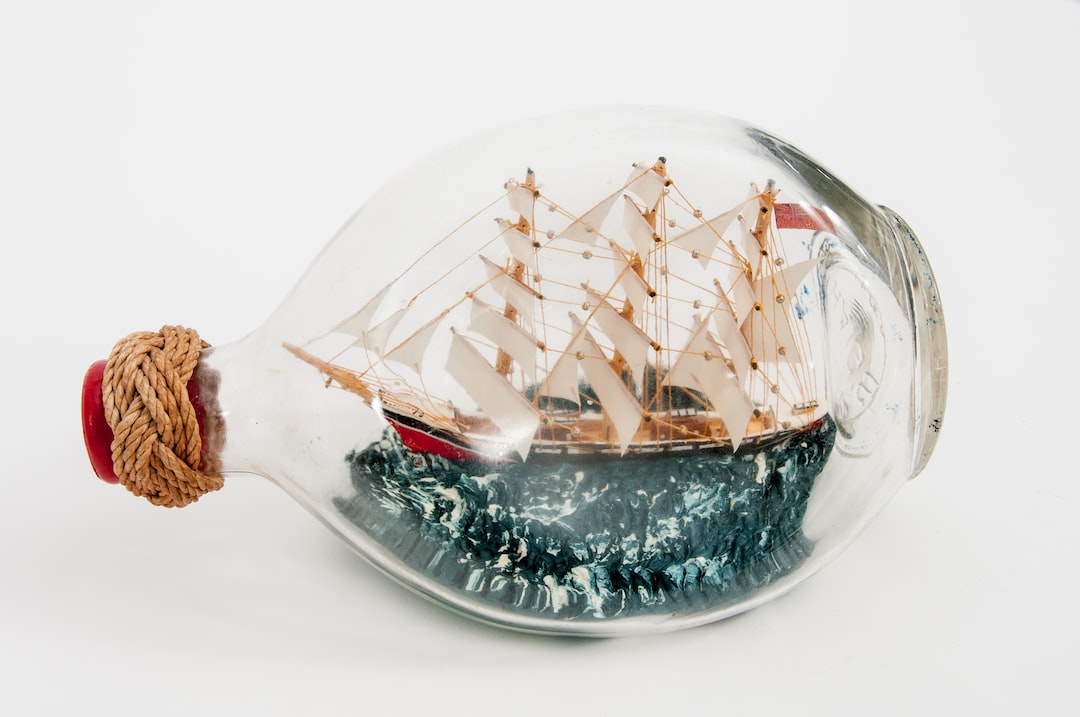 Photo by Crissy Jarvis via Unsplash.

From the author: On a ship in a bottle, a stowaway finds he's been left on his own. (With audio.)

How many months now?

The Captain no doubt keeps a log; but he, down here, in tarry dark, in gathered stench, has little recourse to calendars or writing. For a while, he scored a tally in the planking. But his knife broke and his nails, without sufficient fruit or milk, are hardly fit for purpose.

Regardless, enough months to know the motion of the ship from inside out and bow to stern. To recognise, by the level of his sickness, the ferocity of storms; to know the strata of the sounds above him, though he’s never ventured up on deck to verify their causes.

He’s kept council instead with the barrels, salt pork, and the worm-ridden biscuits. Amidst the shadows and the dank, an internalised barnacle. Able to sneak a little way at times and lift a cannon-hatch and spy the surface: an undulating canvas, tinted varnish and bronze.

At such times, in the arms of such motion, he recalls why he came: to be free of dry land and all anchors thereon.

But there’s no shifting today, and from the stratified tumult the top layer has been stripped.

Clambering over barrels, crackers breaking under pruned-up soles, his ears do whatever is their equivalent of squinting. Just to be sure. He won’t risk discovery lightly – not especially keen to be lashed or keel-hauled or tossed overboard.

Up creaking steps to the poop-deck, past the goats and black sheep; a chess-set with the chequer-piece turtles rule-blending between them; but no players, and no-one around either to tend to their needs or turn them to food.

He leaps from shell to shell ’twixt reeking beasties, reluctant to encounter the slop on the boards.

His hands find the netting that ivy-climbs from the hold, and he scales it, tangling and disentangling, and at last pops his head into silence and space.

And, over the side, no more ocean either.

He whirls about, imbibes the atmosphere, the air, the sky, drawn close with fog. Yet motionless fog, as of breath on a glass.

There’s not even the ruffle of sails, the shiver of timbers.

Parched, he feels salt turning crystal inside him, and his joints crack like Antarctic coasts when he moves. He retreats below for food, for dried meat, but that only makes everything worse. And there is one shrivelled lime which he chomps in half and his face shrivels likewise; St Elmo’s fire climbs the rigging and lights up his brain.

And he lies flat on his back in the heart of the deck, glaring due skywards, unblinking.

He hovers like a gull, or an albatross, between being asleep and awake.

Coming to, he finds the fog clearing. He looks on as lights swell to term in the firmament; these constellations clarifying, gradually, into the face of a god.

The eyes, wide and interrogatory, distort in the aether; one iris azure, the other aquamarine.

Does he recognise this?

He feels her name forming like a prayer on his weak, wizened tongue.

He reaches out but she reaches back and her hand like a storm-cloud eclipses his view.

Glimpse of a fingerprint, with its hurricane whorls.

This sea-goddess then, she has come to reclaim him.

What shall we do with a drunken sailor?

Other shanties and sea-hymns percuss in his bloodstream, throb in his temples, burn in his lungs.

The ship tilts ninety degrees straight up and the atmospheric pressure trebles and it’s all he can do to leap for the bow and wrap his arms round the figurehead’s neck and hang on.

Beyond the fingertips, the fog, there are glimmers of a world in flux.

Is this what they mean when they say that life flashes?

He thinks he knows some of it – a piece of furniture, a picture-frame – but not much.

There’s just him, with his arms coiled in rope and his legs dangling clear in perpendicular space. Helpless but for the grace of this carved wooden idol.

He thinks of the animals, crushed on top of each other at the back of the hold; the turtles, perhaps, the only other creatures surviving.

Then the first droplet hits his cheek.

Then another on his shoulder.

And he realises that the worst of it isn’t yet through.

Even the waves aren’t the worst of it.

They buffet and roil and spray over the sides; they chill to the bone and they lacerate clothing; they shake him and pummel and he feels he’s got whiplash and a sprain in his wrist.

But then they are done.

And the ship even settles horizontal again afterwards. Bobs as it used to.

He stumbles across deck, taking some time to remember his sea-legs. His tongue is still shrivelled. His brain is still raw. The whole world seems brighter, the skies clear and unfiltered.

He reaches the edge, steadies himself, and peers over.

He looks away, dejected, and sees he isn’t alone.

There are a great many vessels, all docked in a line.

On some, the furthest off, he can just make out the breaking crews, already hard at their task; relentless with claw-hammer, crowbar and wrench. Above and around them the scavenger herring gulls billow and swoop.

Beyond them, her mouth holds the horizon, and her harlequin eyes are the sun and the moon.

Does he recognise this?

They hold the stare, both of them, and he wants to reach out again, but he doesn’t and then neither does she.

The light is too strong here. The ocean is nothing.

He turns and he scuttles back into the hold.

This story originally appeared in Structo #15.