From A Distance, Constellations 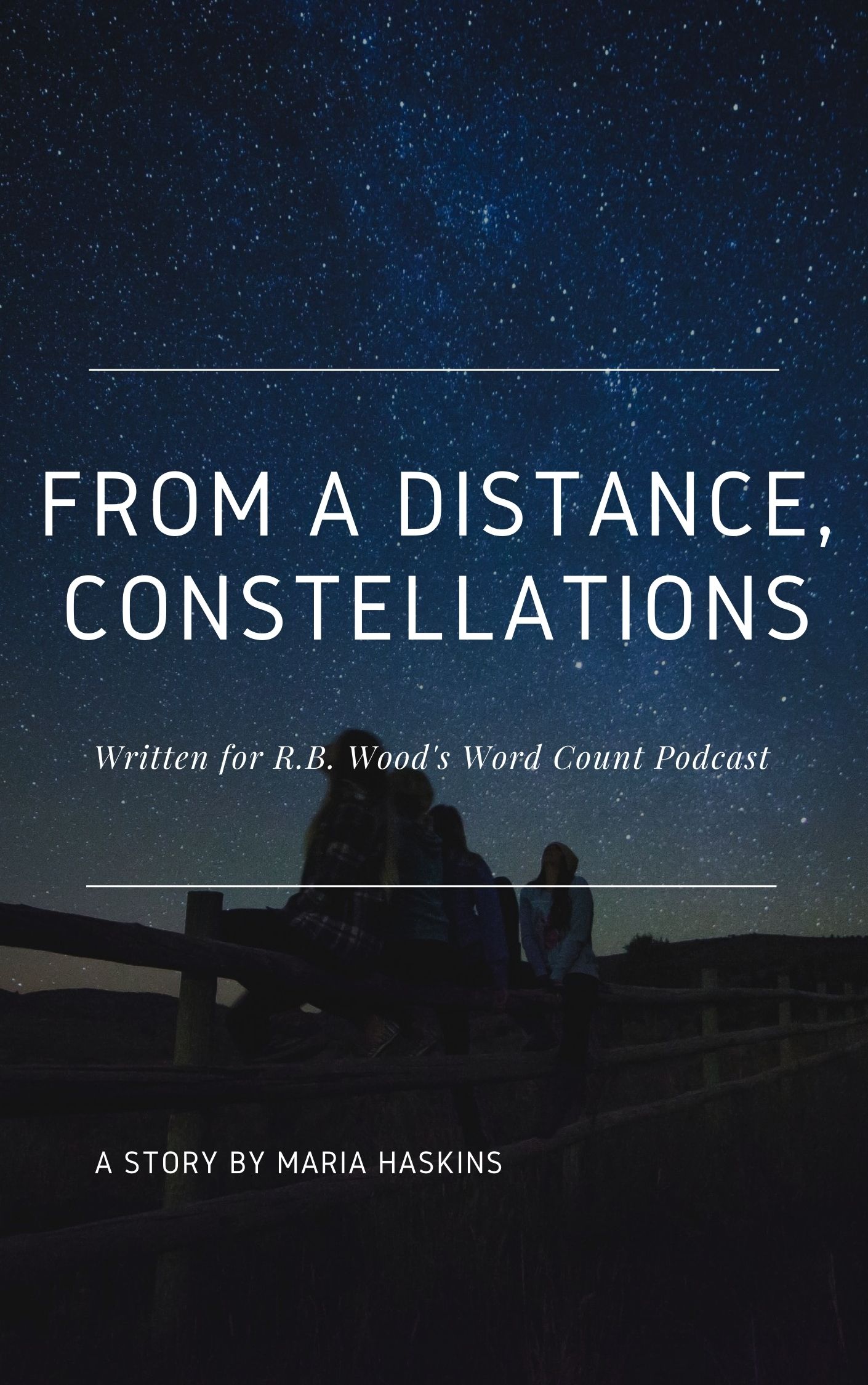 Evie has been sitting in this room for hours. It looks just like all the other rooms she’s seen since the unmarked black van brought her to this facility two weeks ago: concrete walls, bright lights, cameras, a steel door, locked.

The so-called doctor is talking to her. She has short brown hair and her voice is smooth and efficient like the stainless-steel table Evie rests her cuffed hands on.

Evie isn’t really listening to the doctor. She’s heard it all before. From the reporters, the conspiracy theorists, even her parents. They want to know what really happened that day when Evie and the other kids were at the demonstration and that rando appeared, toting a big gun.

Evie is tired of the questions and even more tired of her own answers.

She thinks all these adults ought to have better things to do than talk to her. After all, there’s an apocalypse happening, even though it’s different than in the movies. No aliens. No asteroid. No zombies. Instead: climate change, fascism, pandemics. And in the midst of that chaos: people with guns and bombs trying to grab whatever’s left of the world for themselves. People like that guy at the demonstration.

A shriek penetrates the steel door.

“Is that Alyssa?” The doctor stops talking. “Sounds like her. No one screams louder than Alyssa when she’s pissed off.” Evie listens but Alyssa doesn’t scream again. “Can I see her?” she asks even though she knows the answer before the no is spoken.

Her cuffed hands tingle. She flexes her fingers, but the tingle remains.

The doctor tells Evie that if she tells the truth, everything will be OK. Evie rolls her eyes. She has told the truth to everyone, but they keep asking her the same questions. As if they think she’ll tell them something different if they keep at it.

When Evie finally starts talking, she does not begin with the day of the demonstration, like the doctor wants. Instead, she tells he doctor and the cameras about that time last summer when she and Alyssa almost died.

They were at the beach, swimming, when the tide turned. The water was dragging Alyssa out, pulling her under, but Evie got to her, and while Alyssa held on to Evie, Evie clung to a rock—sharp and slippery with barnacles and seaweed. The scars from that day still crisscross her hands and arms. While they waited for the lifeguards to reach them, they kept saying to each other, we’re not gonna die, we’re not gonna die. And they didn’t.

The doctor is getting impatient, but Evie doesn’t care. “That’s what it was like at the demonstration,” she says. “When that guy started shooting, all I could think was that I didn’t want to die. Same as in the water with Alyssa.”

Then, Evie talks about the demonstration. How it was raining that day, but no one cared. That most of them had skipped school to be there. That being there, with all those other kids felt like strength. Like hope.

She didn’t even notice the guy with the gun until he started shooting and by the time she realized he was shooting at them, the bullets were already tearing her apart: splintering her bones, tearing her flesh, breaking everything inside her. Evie isn’t sure what would’ve happened if she’d been by herself, but they were together. Her and Alyssa. All those other kids. She remembers saying, “NO”. Or maybe she thought it. Maybe they were all thinking it and saying it at the same time when the bullets hit.

Next thing she knew, it was happening. They were all on fire but not burning. Glowing. Each body radiant with heat and light.

Evie’s watched the footage. She gets why no one believes it’s real, but she knows what happened. First, everything stopped. Like hitting a pause button. Then, the whole world was rewound. All those bodies being torn apart, all those bullets flying… together they pushed all of it back, until everyone was healed. Until the shooter was on the ground, weeping, his guns twisted and bent. Evie tries to describe it. That it was like fireworks beneath the skin. That it was power. And they held on to that power, wielding it, together.

She looks at the cameras, not the doctor. “It scares you, doesn’t it? That we didn’t die.”

Evie thinks about Alyssa, imprisoned somewhere inside this building.

She thinks about that night last year when they got home from the beach. They stood outside Evie’s house for a while, looking at the stars, and Evie would have held Alyssa’s hand, if her own hand hadn’t been all bandaged up and everything. Alyssa had taught herself the names of all the stars, and with a finger, she traced them in the darkness for Evie: Orion and Cassiopeia, Draco and Virgo, the Pleiades.

“They’re easy to find, once you know they’re there,” Alyssa said. “But if we weren’t looking at the sky from right here, right now, we wouldn’t even see them. I mean, those stars are just random balls of heat and light, separated by space and darkness. But from a distance, once you know how to connect them, they’re constellations.”

Evie thinks about Alyssa, about all the other kids from that demonstration. And in that moment, she knows they’re all here—that they’ve all been brought to this facility, to be kept apart, questioned, contained. Sitting in that room, Evie feels their presence, their power. It’s all around her, that power, even though she didn’t realize it until now, and grasping it, she reaches out for Alyssa, for all the others, through concrete walls and locked steel doors, and their touch is as real as rock, as rain, as holding hands.

For the first time since she was brought here, Evie smiles at the cameras and the doctor. She smiles because sparks of power are flowing through her veins: changing her, changing them all, changing everything. Before, at the demonstration, all Evie saw was each of them, turned to beacons of heat and light. But here, now, she knows they’re constellations.