Carrow made this story available for free. Say thanks by sending them a tip.    Send Tip 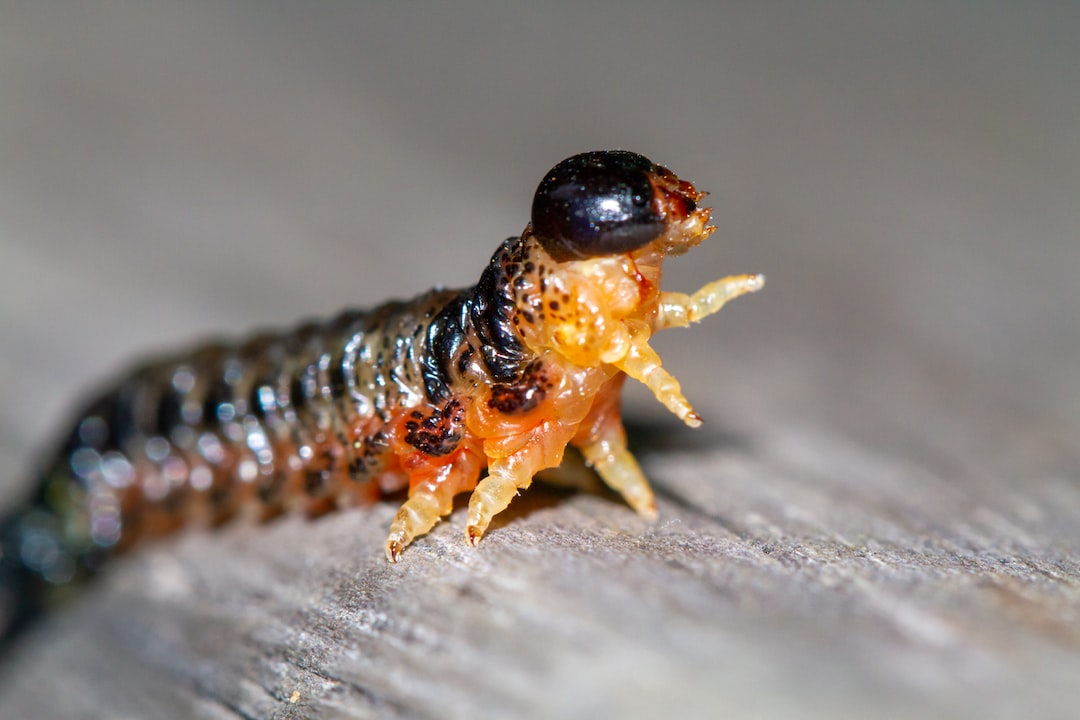 Photo by Photoholgic via Unsplash.

From the author: There wasn’t any kind of initiation waiting for me. It was on my own and by creeping increments that I realized I had become a thing.

They just broke ground this week on a new high rise. When they cracked into the earth it flooded the neighborhood with the stench of sulfur. There’s a layer of ancient rot beneath the pavement. Centuries worth of life, ground into filth.

Or so I imagine. I had to look up the source of the smell and some local news site attributed it to “organic materials” in the soil. I was worried that it might be a gas leak.

For the past few mornings the wind has pushed the awful smell in through the screen above my bed. As bad as it is, it isn’t worth shutting the window. Even as late summer beats on, I can’t sleep without the weight and softness of ten thousand blankets. Without the breeze my nest would become unbearably hot, so I tolerate the smell of brimstone and corruption. It’s sort of fitting, I think, given the maggoty turn that my life has taken.

There are these long, wonderful moments, in between waking and rising, when I am both sentient and senseless. The light doesn’t resolve yet into images. Sensation doesn’t crystallize into meaning. Best of all, I can’t feel my body or apprehend its shape.

You see an awful lot about monsters these days. Just everywhere you look, endless breathless chatter about fucking monsters, turning into monsters, giving birth to monsters. Beautiful and interesting people who just happen to be monsters: some sad grackle-winged boy, a girl with coral antlers. Everyone always looks so slender and sharp. Perfect rows of needle teeth, perfect iridescent scales, perfect gold stiletto claws. It seems downright glamorous, like it would all be neon witches’ sabbaths and subterranean raves or something.

For me, monsterhood is mostly just strangers demanding to know what I am. There wasn’t any kind of initiation waiting for me. No coven or cabal. No prophecy or secret past was revealed. It was on my own and by creeping increments that I realized I had become a thing.

Kris is a friend of a friend. I saw her around a few parties and we fumbled into each other’s orbits. She called out my name from across the room once, amid the din of disparate conversations. It was so charming, that little gesture of being summoned. I let her ask me out, to sit with her in that park at the edge of the North End.

When we meet, she wants to go down Hanover to Mike’s but I point just across the street to a tiny storefront with a blue and yellow sign. “It’s way better,” I insist, and I feel strangely proud as she acquiesces.

The leading edge of autumn has brought a welcome break from the suffocating heat, but it also means that the sunlight has shifted. As Kris and I sit together, the late afternoon light lances down at us. It’s relentless, prying. I wonder if she can tell how much I’m trying to hide from it.

Despite my anxiety, we talk easily and idly. When she was little, Kris recalls, she heard somewhere about the dangers of zebra mussels. They’re an invasive species around the Great Lakes, she explains. Her mother must have read a sign to her or something, warning boaters to inspect and clean their hulls. Except that Kris was maybe four at the time, and she had no concept yet of what a mussel is. She heard “zebra muscles.” What she pictured, she tells me, was downright nightmarish. Not a muscular zebra or something, but a boat encrusted with disembodied, pulsing zebra flesh. She says that the image came from nowhere except the most literal understanding of what she had heard, and that it became horrible only afterward, in retrospect.

“I didn’t understand but I just accepted it,” she laughs.

I grin too, and I tell her “I love that.” And I love sitting here, with a friend of a friend that I met at a party. Normality is too distant even to long for, but here is something so conventional, so pleasantly dull. I wonder if there are people who feel like this all the time and I almost ask that out loud.

But all at once I realize that she’s looking at me, and I can’t bear it. She can see me in the slanted orange light. The rays reveal the translucency around my edges, the ugly pulse of slime beneath the membrane of my skin. I can feel the buttons of my jacket straining. I can’t eat the pastry that I’ve bought, not in front of her. She must realize that my clothes are holding me into a human shape. She’s imagining the strange organs that shudder and twitch beneath the seams.

I can’t force myself to say much more before we part ways. She knows. I’m sure that I won’t hear from her again.

I slump back toward Haymarket. I huddle stingless on a crowded E train. My spines are sparse and transient: often I neglect to shave, sometimes my keys poke out through a hole that they’ve worn in the pocket of my coat.

It is the fate of monsters, no matter what, to attract would-be monster-slayers. For me, this has never been as straightforward as a jeering mob or as romantic as a lone man with a glittering sword. This time it’s kids. A small group of ninth or tenth graders, maybe, standing on the other side of the train car. They gesture toward me and consult each other in stage whispers, wondering aloud what I could possibly be.

There’s this image, a fragment of a story. I don’t remember where I picked it up or what first made me think of it, but it’s there in my brain and it’s this: Once upon a time a baby was found in a beehive.

By chance, a passing witch heard a newborn’s squall. Amid a hovering cloud of bees, she cracked apart a hollow log. And there was an infant nestled in the rot, slick with honey, as pale as a grub.

I don’t know what happens after that or why any of it happened at all. It had started with sacrificing some of the other larvae to widen her cell. And things just took off from there, I suppose. Things took a turn, as they will do.

At home I start to undress as soon as I’ve closed the door. When I finally peel the tight undermost layer away from my torso, my body sags out, shapeless. I slump onto the bed and burrow down into the tangle of blankets. As I curl up tight, I tuck a bit of sheet between every segment and fold, so that I don’t have to feel the awful touch of myself.

I can’t say when or how my metamorphosis began. Day by day I watched my face bloat outward, swallowing up my eyes, my jaw. My skin became a pallid casing. It strains to hold in my shuddering mass, as if my body wants to burst and dissolve.

I have always been drawn to hollows and nests and to the dirt. Spaces in the dark where a thing might press itself flush against the walls, unseen and safe. As a child I would build a cairn of pillows around myself before falling asleep. I used to turn over the rocks that edged my mother’s garden, to watch the millipedes and woodlice scatter. Eager to recoil from the sight of a grub writhing helplessly against the light.

In my tiny apartment there is an alcove that, I think, was meant for a writing desk. But I wedged my bed into it, and closed it off with a heavy curtain.

I guess that it has all been a sort of instinctive preparation. Like the bees widening the larval infant’s cell. The thing is, it’s not just shiny little flying things that start their lives as fat, fumbling worms. It isn’t all butterflies and bluebottles. There are things in the world that wriggle freely as larvae and then pupate into sessile blobs. I think about all those mornings when I stretch out shapeless and insensible. I wonder if I’ll turn out to be more of a sea sponge than a sphinx moth.

Kris calls. She wants to see me again.

We meet at my place. I don’t know what to say about the evening in the park but she doesn’t ask about it. She calls me by my name again. She wants to know if I’m alright.

I tell her about that unshakable image of the bee-child. “What must it be like,” I sigh. To wonder why, out of a sea of sisters, you were the one to swell into something wingless and terrible.

“What must it be like,” she echoes. She’s sitting beside me, looking down at her hands. She smells like soap and trampled grass. I want to settle in closer to her—to kiss her, I realize—but she has seen me in that searching autumn light.

She takes my hand. “Is that your bed?” she asks, nodding toward the alcove.

“Can I show you something?”

I don’t know how to respond. She tugs me gently toward the bed and draws the curtain aside. The final cast-off rays of sunset are glancing in through the window. She turns and looks at me. Her cheek catches the light with a faint damson iridescence. She tilts her head and reveals a weird translucency about her neck and face. I can see the steady pulse of veins and pulpy glands beneath her skin.

Her tone isn’t mocking, just forthright, as she asks, “Did you really think that you were special?”

She reaches out to draw me close. We sink down into my nest and curl up tight against each other. In her touch I can feel the hum of twenty thousand sisters, the promise of clover and of wings.

This story originally appeared in Glittership.

Carrow made this story available for free. Say thanks by sending them a tip.    Send Tip 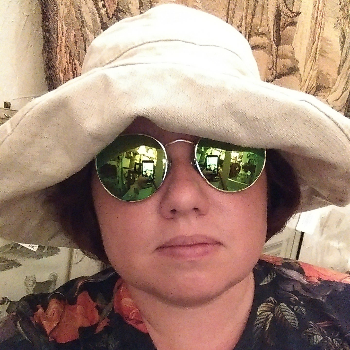 Fiction and non-fiction about sad (and usually gay) monsters.