From the author: The Bachelor + man apocalypse

Dick is not much of a prize.

Unfortunately, Dick, or Richard Anselm III, is today's prize. I'm given to understand that the full saying used to be "dick is in abundance and of low value," but with the ongoing red plague, that hasn't been the case, since it kills off mostly people with a Y chromosome. Not quite an apocalypse, but many communities, mine included, are still reeling at the sudden imbalance. Who knew the lack of cis dudes would be such a problem? And of course, those of us in the rural communities were hit the worst, and college-attending daughters, including yours truly, were summoned home. Because a little thing like the plague killing off most of the cis boys doesn't signal the end of the patriarchy, there is now an uptick in those husband-finding competitions, and general misogynist douchebaggery.

Due to this heinous string of events, here I am on a televised contest trying to win the heart of this dude. My family had sent me because I'm witty and pretty, which is another way of saying, you're useless on the homestead, so go use your smart mouth and bag us fresh genetic material. The producer said that I had "interviewed well" which I think means, "what a bitch, put her in for the drama."

Richard Anselm III, like many young men assured of their cis singularity (cisgularity?) simply because they are now relatively rare, likes to speak at length about how seriously he takes his responsibility to repopulate the Earth, and that he takes his choice of bride just as seriously. It's kind of precious, given the recent developments in reproductive technology, and the fact that pre-op trans women are significantly less susceptible to the red plague. But also, sperm donors are becoming a respectable occupation with new laws decriminalizing sex work. With so many manwhores peddling their jizz on the literal streets, you can't just arrest sex workers anymore without looking like you enjoy the man-apocalypse.

But I stuck with the show. Mostly because I don't want the clear lead in the contest, Susan Thompson, to win, because the Thompsons are notorious for being vocal anti-vaxxers. Dick Anselm may not be much of a prize, but he also doesn't deserve to be shackled to a family that's okay with not properly vaccinating him against the red plague. Some sort of transphobic logic that if you vaccinate your sons, they become effeminate, and eventually turn gay, or into women, which empirically, is not a thing. Also the Thompsons are resource hogs. And maybe they would be okay sharing him, but who wants to ride red plague ridden Dick?

As the host lists the rules for the next round, my eyes wander across my so-called rivals--in the last few days, those of us amenable to sharing the spoils--sharing the victory?--sharing the prize? We've found each other, and as the requirements for winning are rattled off, I see us exchanging glances and nods: Cathy's got the right tools for this one, or Brooke knows how to do this task just right, Bebe can take the hit this round because she's got enough points to tide her over to the next round.

Ruby Cho bounces encouragingly on the balls of her feet, which draws Dick's attention, because for all his talk, he's still a fuckboy. I hope Ruby Cho wins, because her homestead's not too far from mine, which makes any sharing easier. Also, I don't know what androgynous sorcery she's on, but she's radiating it, and she's intoxicating to look at. She deserves a better Dick than what's on offer. The world deserves a better Dick. Shit, I could be a better Dick.

The crowd's yelling at me, I guess I'm on for this next thing, but I stand still, thinking, oh God, my God, I could be a better Dick. 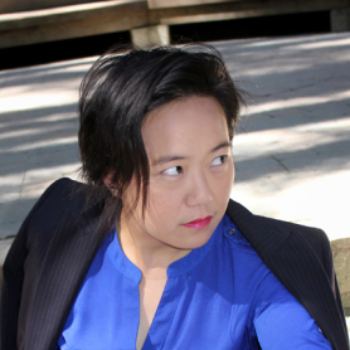