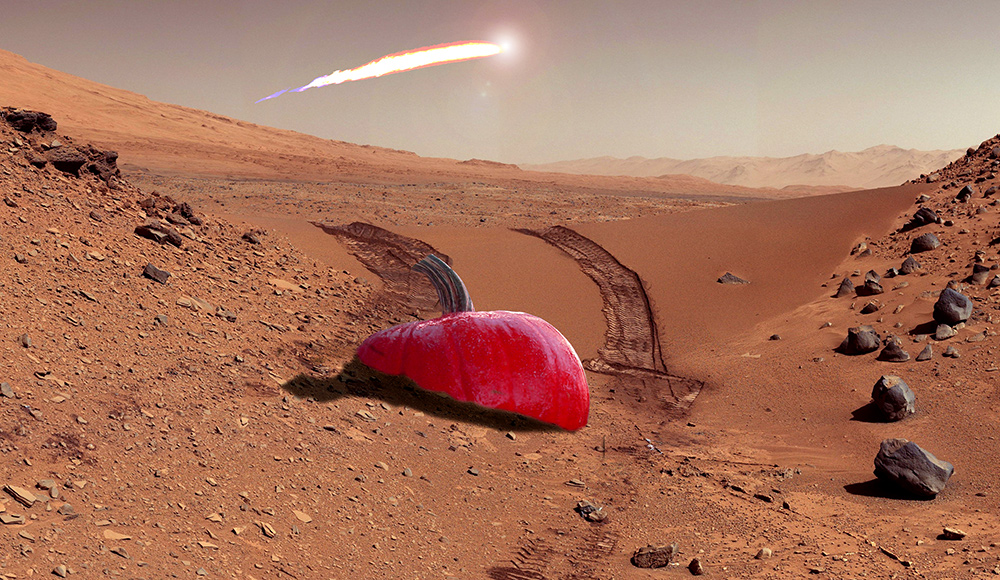 From the author: I set out to write a space pirate story. It got weird.

Kat Malone appeared in the sky while I was up to my elbows in red Martian mud.  Her aerobraking shield had a distinct heart shape.  This far north, this early in the inbound season, it couldn't have been anyone else.  The early ships always go to the large population centers near the equator.  When Kat Malone was coming here, she was in trouble.

Joy Hernandez worked on the far side of the dome, taking soil temperatures and grimacing with each one.  She pulled a strand of silver hair out of her eyes as she, too, looked up at the flaming heart streaking overhead.

Joy didn't say anything.  Nobody ever did.  Everybody knew that when Kat Malone came around, it was best just to pretend she wasn't around.

From the time you see the aerobraking orbit to the time the ship is on the ground is usually around an hour, so I had plenty of time to get to a good stopping point.  I left the irrigation line I was troubleshooting, got up, and shuffled through the crowded residential pods to the airlocks.  Nobody spoke.  I don't know whether or not they had seen Kat Malone.  Maybe they just never looked up from the daily battle to keep the colony's domes from falling in on us.

I took up a station by the docking pad she usually used, squeezing my oversized frame into the cramped connecting cylinder.  Fifteen minutes later, her ship — still steaming from the atmospheric entry, treads kicking up a huge cloud of late-afternoon dust — crawled up.  I extended the docking tube without bothering with the "Welcome to New Kingston" transmission.  Five minutes later, Kat Malone appeared on the other side of the tiny airlock window in a flash of green eyes and red hair.  I released the latch.  The inner and outer doors, separated by a decimeter of vacuum, rolled back in opposite directions with a pop and a hiss.  Kat Malone's hair blew forward across her face, briefly hiding the new lines that had formed since I'd seen her last.

"Howdy, lover." Her voice sounded raspier than last time, but the corners of her mouth turned up slightly nonetheless.

"How much trouble am I going to be in this time?" I asked.

I let it unroll.  It was a good twelve centimeters longer than she was tall, and I didn't care how stretchy the fabric was, there was no way she was getting it over her hips.  "You wore this?"

"Oh, dear God, no!"  She folded her arms and leaned onto the airlock wall.  "Pierre wears the dress.  He's a much more convincing damsel in distress than I ever was, and he knows what the men want."

Somehow that didn't surprise me.  I'd never met most of her crew; but using a young man in drag to lure in ships seemed like Kat's style.  I rolled the dress back up and tucked it into my belt.  "How bad is it this time?"

She heaved a sigh and pushed off the airlock wall.  "You inviting me in?"

"You haven't told me how much trouble I'm going to be in."

"I've got a load of melons and gourds."

She slapped the side of the airlock and barked, "Well, how the hell was I supposed to know that asshole would be outbound at the beginning of the inbound season?"

And then it all made sense.  Sometimes when a trader missed the outgoing season — the window to get back to Earth — they waited on Mars, picking up an early load of outbound merchandise and hanging out in orbit, hoping to make a trade with an inbound captain who didn't want to spend the fuel landing.  Kat Malone had thought she was raiding a prime early-season inbound ship that would be loaded with the type of merchandise Mars needed most — medicine, synthetics, electronics.  Instead she found herself sitting on a ship full of the very stuff we were trying to get rid of — oversized produce — all in crates that had embedded origin tags that could easily be traced.

"Send that ship off and let the crew take its chances with the authorities.  Stay here.  We could use you.  You're wasting your education out there."

"And you?"  She motioned to the red stains on my sleeves.  "Ph.D. in hydrodynamics and you were, what, digging a sewer?"

"Fixing an irrigation line."  Water behaves strangely in 1/3 g.  It really does take a Ph.D. to get it right.  Most colonists have advanced degrees.  Trained on Earth, exported to Mars.  The fate of anyone not in the top 1% of their class, not from a prestigious enough university.

"No trade, Kat.  If anyone notices the origin tags, I have no way to explain it."

She harrumphed, a sound I knew all too well, a sound I still heard in my dreams sometimes.  "Fine.  Get me 250 crates, then.  I'll swap the cargo into them and find a nice crater out in the Viking 2 Preserve for the ones I've got.  You just pretend you sold me an early harvest on credit and we'll be good.  What do you need?  Plastic?  Rare earths?"

"We could use a good structural engineer."

"You're not getting that."  Kat Malone had been a dissertation short of being one of the best structural engineers on Earth, 20 years ago, 20 lifetimes ago, on another planet.

"Come on," I said, backing out of the tube.  She jumped into the bay beside me in a graceful, slow-motion leap — too powerful for her years — and we shuffled off toward storage together, silently.

Credit.  I wondered if that meant she was coming around again, or if something valuable would just show up one day.

We skirted along the edge of the colony.  I didn't need to direct her.  Silence hung between us.

Sometimes our silences had been almost telepathic.  Like the time she came home with the bundle I knew she needed to get rid of, evidence of some crime I knew nothing about.  Sometimes I still feel the waves under the tiny boat on a lake in Minnesota, lit only by a quarter moon.  She never offered an explanation.  We just weighted a box and tipped it over the gunwale.  Nobody ever found it.

At least I assume they didn't.  Our local government officer would almost certainly have wanted a statement from me if he had gotten an inquiry.  He liked to know what was going on, even when he knew he wasn't going to do anything about it.

That same government officer was one of six folks in the tube near the storage dome, looking the other way, transfixed on a drip from the condensation line.  That drip had been going on for two years now without bothering anyone.  I ignored them, too, and dragged the storage dome's locking ring open.  250 flattened crates would be easy enough for two people to manage in Mars' gravity.

Sometimes Kat's and my silences were just silences.  We both knew how to stack the crates so the weave of the grass they're made from locked together, but I could taste all the things she wasn't saying without having any idea what they were.  Unanswered questions hung in the air.  When we were together, unasked questions hung like that, too.  She used to fire up a deep fat fryer when she had something she knew I wouldn't want to hear.  That deep fat fryer told me more than Kat Malone ever did.

And I could still smell the grease.

Fried foods were almost unheard of on Mars.

Kat Malone and I assembled a stack of crates and four-handed them back the way we came, Kat stealing nervous glances at the group that still studied the drip.

A broad-shouldered man with the face of a model waited for us at the airlock.  Kat Malone didn't introduce us.  "I've got the logs modified," he said.  "It won't stand up to a full security sweep, but it should get us through a casual check."

"Good," Kat Malone said, swinging her side of the pile of crates around so he could take the other half.  "What about the communications buffer?"

"Purged," he said, cocking his head to read the origin imprinting on the crates.  "They may be able to reconstruct Pierre's distress call, but they'll have to know what they're doing and where to look.  What are we trading for these?"

"We've got them on credit," Kat Malone said.

"Oh?"  The handsome man arched an eyebrow in my direction.  "They trust us here?"

She had never lied.

But she often said nothing at all.

She hadn't said anything when she left me on Earth.  She simply stopped coming home one day.  She didn't take any of her things.  And when I was recruited to New Kingston, I couldn't take most of mine.  I paid an additional three months' rent and figured she knew the key code if she wanted to come home.  I grabbed a migrant transport out of Winona.  I've always imagined that she found the note I left on the counter.  After all, she knew where to find me.  But she never said.

And I never asked.

I spoke to the man instead.  "Our offer is good for the whole crew.  If it's getting too hot out there, dump the load, and we'll order up another residential module.  We can always use hard workers who are used to things not being terribly comfortable.  I don't think our local government officer would be all that interested in your pasts."

The man chuckled.  "I don't think any of us are the sort who could grow melons."

"We could use some honest traders, too."

Kat Malone looked back over her shoulder as they ducked into the airlock together.  "And we'd starve."  A slight smile crossed her lips, and her green eyes flashed slightly sad, then stern.  "Take care of yourself."

The airlock doors rolled shut behind her.  Five minutes later the tube retracted on its own, and her ship was crawling off into the Martian twilight.  I didn't stay to watch her go.  I headed back to the agriculture dome.

Joy Hernandez had made her way a quarter of the way around by the time I got back.  She smiled at me with her lips pressed shut, but the corners of her eyes were turned down.  She knew.  They all knew.

I got down on all fours and got back to work on the irrigation line as the nighttime work lights blinked on.  The dome rattled slightly, and I glanced up to see the red light of Kat Malone's launch engines arc overhead.  She was back in space — the vacuum, the void between us again.

But it seemed fitting.  After all, this how all love affairs end: one of you on hands and knees, a million miles of empty space between you. 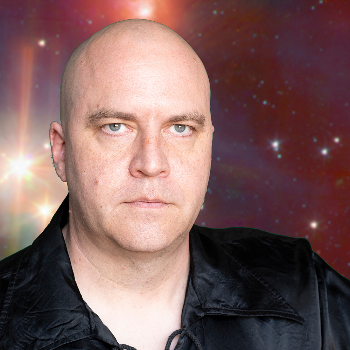 Kyle writes science fiction and fantasy and is mouthy about QUILTBAG issues.