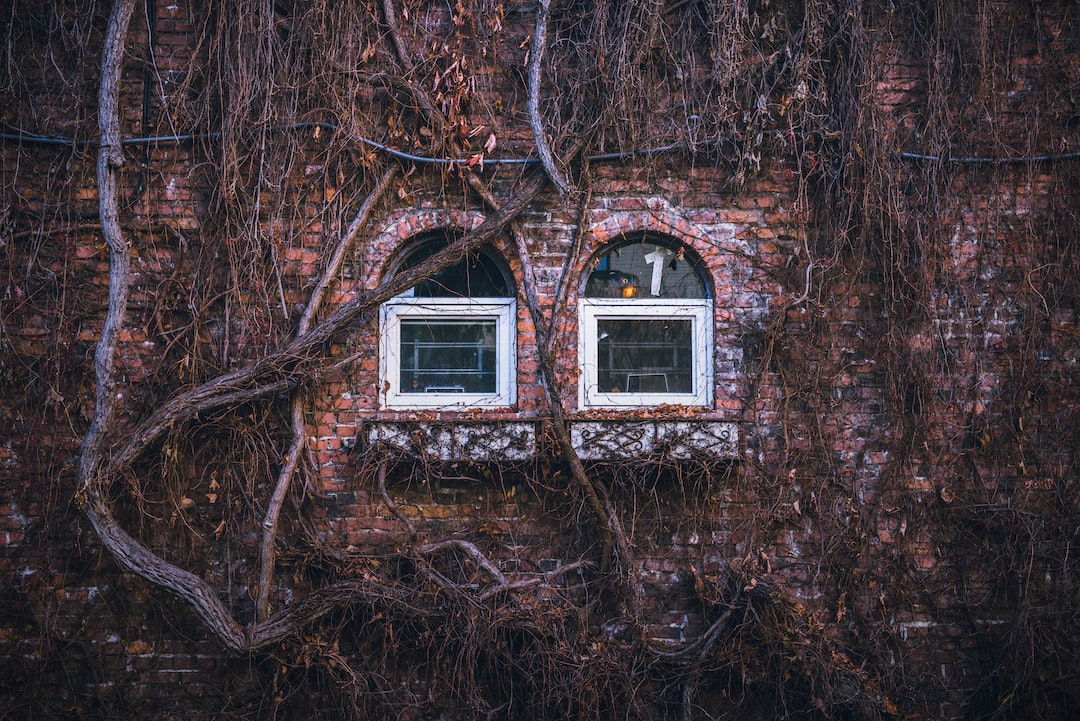 Photo by Tj Holowaychuk via Unsplash.

From the author: Julian Broodmoor finds himself in a grand house with a sinister secret.

Julian Broadmoor rapped the doorknocker. He hefted his briefcase, tugged at his scratchy shirt collar, and batted off lint from his tweed jacket. The jacket repelled some of the light drizzle, as did his bowler hat. But it was making its presence known down the back of his neck. He’d left his umbrella behind.

No matter, he thought. I have everything I need.

He waited, cast a glance at the lowering sky, and moved closer to the door. The dark grey awning above it arched into a kind of apse, and underneath he could squeeze in just enough to avoid any of the sideways rain as it floated around in the breeze. He knocked again.

A dog yipped, somewhere down the street. It was a quiet neighborhood, perhaps over two hundred years old. The manor he stood before looked much older. His papers backed up this observation: it was built in 1657. Its wooden awnings had been replaced over time, but the large grey stone seemed anomalous in this area. No other house looked the same as this. It in fact looked rather like a small castle.

Someone’s picture of grandiosity, but not quite.

He noted the wrought iron fencing around the outside of the hedge, which fanned either side of the front of the manor, and extended around the back. That hedge looked severe to him: trimmed within an inch of its life, so as to appear lifeless. Julian doubted any creature would want to dwell there, as it surely formed a dense matrix of impenetrable leaves.

He stood contemplating this, and watching the rain bead on his shoes, when he heard at last the hollow sound of footsteps on a wood floor. A series of clicks and scrapes heralded the door’s unlocking. It swung open, and he met someone who looked as if she had walked straight from the dour hedge itself.

She was every bit as boxy, and presumably as boxed in, as the harshly landscaped hedge. Her long-sleeved dress stretched to the floor, where a faint edging of dust could be seen along the hem. Atop the dress, a long, white apron stretched over her broad yet lean frame. That apron looked as if it could stand on its own, owing to the amount of starch applied to it. The woman looked at least seventy, but it was hard for Julian to tell. He recalled a lesson his father had imparted to him long ago: “Never assume a woman’s age. Or whether she’s with child. Trust me, lad, if you value your life!”

She stared at him through wire-rimmed glasses, with just the faintest upturn at their corners. Some personality, then, he mused. Her hair was tied into a knot at the back of her head, and it was pale grey. Her eyes were dark grey, and really the only thing not grey about this woman was that alarming apron.

“Hello!” Julian offered a hand, for the woman simply stared at him. “I am Julian Broadmoor, and I am here about the deed.”

The woman cleared her throat, and reached over to her right. She pulled a cord, and Julian heard a bell echo softly in the distance.

She had not taken her eyes from him the entire time.

“I’ll get you some tea, Mr. Broadmoor,” she said finally, with a rasping voice that sounded quite as if it had been unused in a century, or perhaps more. “Well, come in, then.”

Julian obliged, removing his hat. She snatched it and his coat before he could catch his breath. Stowing these out of sight, she reappeared and led him to a parlor.

“Mrs. Clinkit,” came the reply in a chop of syllables.

She waved him toward the open parlor door, and then swept off, presumably to get the tea.

Now, having been accustomed to visiting the homes of elderly patrons, Julian had expected the presence of a parlor. He always looked forward to this, for he felt that parlors, while not indicative of a person’s true wealth, often revealed something of one’s nature. Typically there would be at least one artifact that gave him a sense for the person.

Julian walked into that parlor, and felt his pulse surge. All along the walls were shelves, and on each shelf, dozens of jars filled with a lurid yellow liquid glinted in the gas lamps. Within each jar floated a human heart.

Julian’s reasoned side of his mind thought, Of course, of course. He was a physician for many years. But his pulse betrayed his true feelings. This is macabre. This is ill conceived. This is an obscenity!

He reeled, and fortunately found a chair close enough that he could slide into. He rubbed his temples. His head ached. He then heard the alarming squeal from the wheels of a teacart, trundling on the wood floors.

Presently Mrs. Clinkit pushed the cart in through the parlor door and over the edge of the rug, which precipitated clinking noises from the cups and saucers.

Julian, in a fit of perhaps madness, thought, Mrs. Clinkit clinks it!

And he realized his brow must have shone with sweat, so he flicked out a handkerchief and wiped it. Mrs. Clinkit ignored him completely, and set about uncovering the food and pouring his tea.

At any other time or place, the food might have been appetizing to him, and he might have taken it gratefully. As it was, he could not see beyond dozens and dozens of hearts, deep muddy in hue, some outright black, drifting in jars. To him they felt like eyes, they felt alive.

He could only think in profanity at that point, as he tried his best not to vomit.

“I—yes, thank you,” Julian stammered. “Thank you for the tea.”

She turned to leave, and Julian felt as though he wanted to say something, wanted to ask about those hearts. But she left, and he sat there, facing food and drink he knew he should be grateful for. He found himself stirring his tea and trying unsuccessfully to look only at it and not at the denizens on those shelves…

But one of them flashed at him.

He choked on his tea.

He looked again, and saw one particular heart in one particular jar. But this was no ordinary heart. It shone, it sparkled. Finally he felt fortified enough to stand, and so he walked over to the jar.

He was right. It was a jewel, like a great, deep red garnet, suspended in the jar, and in the rough shape of a heart. It was translucent, but so deep a red that one could imagine its being bottomless. He dared to pick up the jar.

A gust of wind blew into the room, chilling his neck. Holding the jar tenderly, he turned. He almost dropped the jar.

Before him stood a shape of a woman, pale, with a long, draping white dress and pale hair tied back with a small braid on each side of her temple. He could see through her to the other side of the room. She held a finger to her mouth.

“Please do not yell,” she said, in a voice soft like the wind among pines. “The Wizard will be here soon.”

I am asking a ghost about a wizard. Did someone slip me absinthe?

“I am Julian,” he said, staring at first, then blinking. “Julian Broadmoor. Did—did you say Wizard?”

“Yes,” Shellany replied. “The Wizard Deneb who lives here. He is the person who stole my heart, which you now hold.”

Julian tightened his grip on the jar, for fear of dropping it.

Thinking as logically as he could, given the circumstances, he asked her, “Why is your heart crystalline?”

“The Wizard made it so,” Shellany replied, and Julian watched as her hands drifted toward the jar.

“H-how?” Julian replied. I am asking a ghost how her heart was made crystalline by a wizard. Dear old Dad never had advice for THIS.

“The Wizard spoke pretty words,” she said in her whispery voice. “I enjoyed the pretty words. They made me feel special. He became my suitor, and he treated me to fine foods. He promised me many things. I believed all his words.

“He brought me to his house, which I dared to do, despite how it might have looked. I was entranced by the Wizard, by his generosity, by his grace, by his—”

“His words,” Julian finished. He looked at her, and he pitied her. She was beautiful, in an elfin way. What must have she looked like as a living, breathing person?

Julian looked at all the other hearts. “And…so…whose are those?”

“The Wizard killed them all,” Shellany replied, her breathy voice cooling the air between them.

“They did not interest him. He said I was intelligent, and talented, and beautiful, and full of grace,” Shellany explained. “So he wanted to keep me. But not as a partner, as a collectible. I would not be shared with the world. I would not be public with him as his wife. He would only take me out as he wanted me. And the rest of the time, he would set me aside. As a piece of stolen art.”

Julian felt a flush of rage stain his face. This man, or Wizard, or whatever he was, he had taken something precious from the world. The Wizard had enchanted Shellany, and who knew how many others, to their doom. Yet he kept Shellany entrapped, his special keepsake.

Shellany’s face bore a glorious smile, and her wavering form seemed to glow.

“I knew you would be the one to save me,” her soft voice told him.

“There is no saving you,” a voice crackled in the air. Julian swung around, and in the parlor, there stood the Wizard Deneb.

The Wizard was tall, so tall that Julian had to bend his head back to look up at him. His clothes were black and overly large, draping over him as if trying to conceal some strange, inhuman shape. His hair was white and his eyes deep-set and black, and his beard was white and neatly trimmed. All in all he could certainly have passed for a man. But Julian knew in that second, from the dark eyes flickering in the gas lamps, that this was no man.

And Deneb stepped into the parlor, facing Julian and Shellany, who had wafted beside him and refused to leave Julian’s side. The Wizard leaned down, grinning, with horrible silver teeth.

“There is no saving either of you.”