Christi made this story available for free. Say thanks by sending her a tip.    Send Tip Photo by Nicholas Bartos via Unsplash.

From the author: The dreams begin approximately ten days before the start of a new semester. The teacher falls asleep watching late-night programs, wakes with the dream images, and curls away from her husband’s warm back to write.

The dreams begin approximately ten days before the start of a new semester. The teacher falls asleep watching late-night programs, wakes with the dream images, and curls away from her husband’s warm back to write.

Keep a dream journal, she tells students. Her classes focus on discreet academic tasks, but she says we have to grasp at what we can. She hopes that the ones who seek will take that permission, and the others will think, at least, that they should pretend.

The semester begins. She learns names and relishes a few weeks of calm, then she can’t stop reading even when the papers are finally cleared from her desk. She takes books into the bathroom. Magazines spatter with grease because she reads while she cooks. Her husband knows he can’t have her full attention for another two months.

A student makes a vaguely aggressive comment toward a classmate. She opens her mouth to recite one of the ground rules the class has agreed upon regarding speech acts, but instead she laughs. No one notices a character breach. They laugh with her.  Still she believes she is herself.

Around the shared office and the faculty kitchenette, she makes aggressive jokes without knowing in advance that she is about to do so. Colleagues laugh with her. Their eyes spark. She rises in their esteem.

One night, there is a person talking to a familiar late-night host on television. This person is glamorous, beautiful, vile. Above her unnatural cleavage she has hung a glistening armor of a necklace paved in many black and gray and fewer, smaller green Swarovski crystals. Her off-white hair does not tangle in it. The teacher is thinking how the entire person, the nature of her and the artifice and all of it is such a superficial distraction from, or perhaps an amplifier of, the person’s bitter rhetoric. Then she is wondering, Where I can get this necklace?

Still, she wants to believe she is herself. She takes an opportunity to visit a nearby counseling center. She is not able to voice her concerns, but the counselor convinces her that letting go is the answer.

If all isn’t well, it isn’t the end, they say. Don’t sweat, and it’s all small stuff, they say. The teacher wonders if this counselor finished school, but her head is nodding.

Things look up. She is working efficiently through the grading now, not lingering over subtleties. She has time to work out. The husband’s mood elevates. They laugh together, go to movies, shop and snuggle on the weekends. Her body is engaged, her personality is engaged, and yet she feels absent. It is as though she is lying back in the passenger seat while another person drives.

The semester ends with muscle gain and fat loss, the general high regard of those around her. Over the break, she finds herself searching before and after photos of breasts. Searching for shoes and clothing like she has never worn. Bracelets that cost as much as cars. The new semester is about to begin.

She realizes that she is no longer herself. She can still feel and hear and see but cannot control her body. She wishes to type an email, but the fingers won’t move, nor will the eyes focus where she wills them.

The teacher’s dreams begin again. In dreams, she can still act. In one, the lecture hall is a dank, black, and homely-smelling theater. The students squint to see her slides projected on a tiny laptop screen and her voice comes out as if through a tiny blown speaker. She scans the seats for a certain person.

In another dream, she has been sent to educate the rural poor. She sends new students to their paltry library, each to choose a book, and they come back, one with a guide to working on Fords, one showing off a critical edition of Brontë, and the rest with the thinnest pamphlets they could find. She preaches to them about what it is to read a book, and there is one who smirks and begins to text, and this is the one she’s been searching for. But the dream is too soon over.

She suspects that this one, wherever she dreams, is dreaming of a terrible scold of a teacher.

In the last dream, the class is held in a grand dining room. Students hold forth so that all she has to do is lean back. Goosebumps rise on her arms as she hears how brilliant they all are. She feels hope. Only one leans against a far wall and crosses her arms. The teacher notices but ignores this one.

The package that arrives surprises her. It has her no longer lying back but panicking. It’s like she’s shattered into sparks, into strong little birds. The suit inside the package fits well, and perhaps this is why she sees her hand writing out a long note to her husband, all the time screaming no inside.

She is out the door and driving. To where? The first stop is at the site of a dumpster where she takes out suitcases she has packed. She leaves them on the ground instead of throwing them in, which seems a kind gesture, but then a tall man walks by and she asks him if he might lift them in for her. She is driving again for long hours. She does not guess ahead of time but is not surprised to finally pull into the open garage of a tall sand-blonde home. She enters and speaks to a person waiting there, an employee. The things caught in peripheral vision look like bachelor’s furniture: neutral, just off sterile. Pneumatic. The word makes her think of a novel she once read, once taught actually, where everything soft was described as pneumatic, from a sofa to the curves of a woman’s body. She laughs at herself even as the employee takes leave and the terror slowly returns.

Walking down a long hallway, she dreads some man waiting, some off-smelling man who will handle her. This walk seems to take hours, with nothing to see but the taupe carpet and the textured taupe walls, two rows of white doors that are not the door toward which she moves. The heart in her body beats faster and harder. She can hear the blood. She finally takes hold of the cold doorknob and enters.

There is no shirtless man. Instead, there is a hospital bed. The body lying there is only slightly overweight, older than the teacher’s body but not old. The fundamental problem with it is that it is very ill. Something about its texture and its odor tells her this.

It does not have long, now.

She stands the body, strips it, and looks at it back and front. She caresses its back. She can feel the tears moving on her face but does not feel why. The face looks back with affection, no tears. It is the older face, of course, of the disgruntled student in her dreams. She doesn’t know why she never expected to see this face in waking life.

She dresses the body and helps it to the door where someone grasps it and takes it to a car. The person comes back for its suitcases and leaves again, and the car pulls away.

She imagines another consciousness lying back in that other body and pities it. It seems worse off than she. After all, she still has her sense of humor, still laughs at herself. She can still read, even.

Christi made this story available for free. Say thanks by sending her a tip.    Send Tip 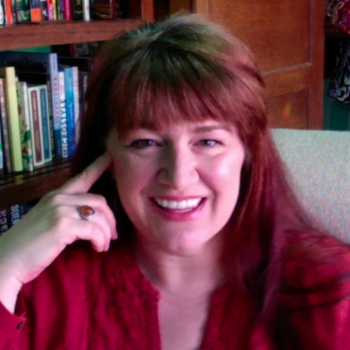