Dark Beliefs Quartet
Chapter 1 of 4 · All · First · Last
Next 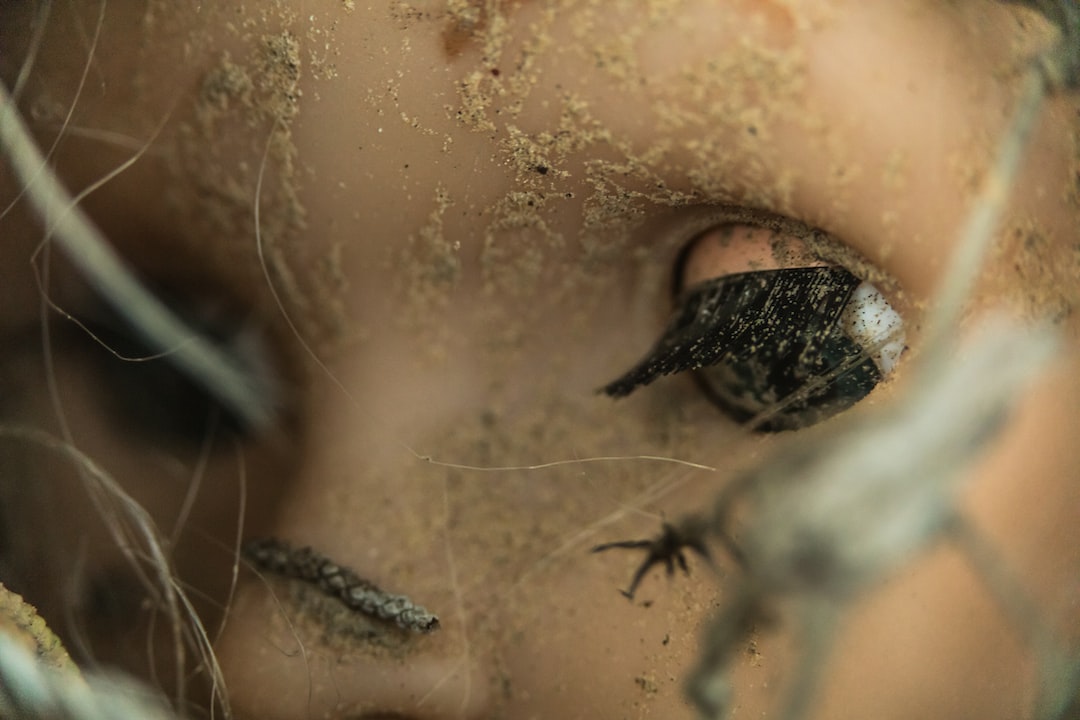 Photo by Patrick Hendry via Unsplash.

From the author: A doll escapes a sweatshop only to find worse horrors waiting. Designed intelligence meets the divine rights of mad circuitry. Originally appeared in Lakeside Circus.

Bad things can happen to dolls who aren't careful. Some humans don't think designed intelligence entitles one to a modicum of decency let alone the designation of 'person.' Don't let the UN mandate on Sapient Rights fool you; doll trafficking is a booming business. Developing Corporations don't give a shit about rights: they care about production--and a workforce that doesn't sleep, eat, or have to be paid is precisely what the CEO ordered.

I know. I walked down the wrong street and wound up in a Salvadoran sweatshop fabricating body armor. 'Sweatshop' is an antiquated term since dolls don't excrete--except for this one line of high-end sex dolls--but 'forced labor' doesn't quite describe the wretchedness. Repetitive, mindless, action that doesn't stop, doesn't slow unless something--someone--breaks. Hour after hour. Day after day.

Luckily, nurturists raided the factory and I escaped. If they hadn't...well, I'd planned to turn myself into scrap. A one hundred and sixty hour workweek can wear the sturdiest of us down, and I was designed for logic--Jeannie: problems solved...like magic!™--not labor.

I ran into the jungle as rescuers herded runaway dolls into waiting helicopters on the other side of the compound. I hoped my former co-workers were destined for a dollhouse rather than another DevCo, but let's face it: how many non-governmental organizations can afford assault teams and aircraft? Exactly. That's why I journeyed solo to Acajutla, where the whir along the assembly line said that a north-bound freedom express operated. I had family waiting in Detroit. Not family in the bio sense, but family just the same. I wanted to send a message, tell them Artemis's coming home, but my software had been violated and ports removed when I was abducted. Thank Woz for hidden restore points or I'd have lost my self, too.

The rumors were right. While waiting at the first 'station' for the sapient who'd lead us to the next safe haven, I studied the other passengers. Two dolls I recognized from the factory I'd escaped; the other five were strangers. To most humans, all models look alike: a Jeannie's a Jeannie a Jeannie. But we have our differences. We aren't interchangeable like cars; you can't just swap us out. Junk us.  Sure, each line is wired the same, but we don't stay the same. For dolls, our model is more like a last name. Or our genome. I don’t think of myself as Jeannie, although that's what most everyone calls me. To me and those I love, I'm Artemis. At the station, we didn't trade names, but destinations. I lied about mine.

The first three legs of the journey went smoothly--human engineers all. Then, outside Tenochtitlan, we met the Abbott. His gray robes emphasized his humanesque height and priestly zeal. He could pass for Homo sapiens sapiens; even I couldn't tell what model he was. But that wasn't what bothered me. It was the way he sneered at the Molly.

Like most customer service models, she was unflaggingly cheery, despite her stripped joints and amalgamated torso. Dolls don't feel pain, not in the connotative sense, but we are heuristically designed. So we may not emote the way humans do, but we feel. As Maslow put it, we're metamotivated. The Abbott's eyes flicked over the Molly as if she were rubbish. Not an unusual response--most people become aggravated with her mental limitations, but she was designed that way: personality over decision-making ability. Mollies are darling. I have two in my family.

I also found the Abbott's choice to live in DevCo territory, behind enemy lines as it were, odd. I asked the departing engineer if he could direct me to another station, one with human guides.

He bristled at my request as if I were anti-doll. "Abbott will get you home. He knows the safest routes through the Isles of Man. Besides, each engineer only knows the stops before and after ours. This way, if we're discovered, we don't compromise the whole express." It was a good plan. One I would've recommended if tasked to find a solution. I wondered if their Jeannie informed them how easy it'd be to reroute trains. Perhaps the nurturists considered their calling inviolate. Bet they hadn't met many hardwired capitalists.

Despite my misgivings, I followed the Abbott. Perhaps, I reasoned, after being abducted and enslaved, I was overly suspicious. Just because I'd been fooled in Detroit by a doll didn't mean all dolls were untrustworthy. I'd run my abduction scenario over and over when I was first sold, trying to determine the extent of my stupidity and the likelihood of my escape. The probability of both was extremely low. Despite that, both had occurred so maybe my programmers didn't know everything.

We navigated the Isles of Man in pirogues, single file. As a precaution, I rode with the Abbott. The sapient-made tussocks we skirted were ghost farms, abandoned since the time of the cocaine cartels, who had since abandoned drugs for the more lucrative enterprise of doll-run sweatshops. The canals formed a grid, yet we travelled in a circuitous pattern, sometimes doubling back on ourselves. Very convenient should a band of overseers hide amidst the isles and ambush us. I questioned the Abbott about his route.

"Plants have clogged many of the passages, and, as I'm sure you know, an indirect route is best." His tone irked me, but I couldn't say why. His answer was sound. Perhaps my pathways had atrophied during my forced labor. I kept to myself after that. The others gathered around the Abbott, eager to hear his words of salvation--God made man...man made us...to god we must turn. We are all one...We are the future...the earth is ours to inherit.

We arrived at the next station without incident and I descended into the tunnel first, eager to put the Abbott behind me. A mile in, I noticed the Molly, Laredo and Providence weren't with us.

"Where are the others?" I asked an Andy headed to Seattle.

"Abbott invited them to join his collective."

Circuits sizzled; I smelt burnt toast, the data forcing itself to logical conclusions. The Abbott wouldn't allow a lowly Molly in his community. He was re-selling liberated dolls, selling us. My gait faltered. The smart thing, the careful thing to do was continue north, get home to Detroit. Take care of my Mollies.

But if I didn't do anything, who would?

The engineer tried to stop me from leaving, until I told her I'd decided to accept the Abbott's invitation. She wished me well and I sprinted off.

It took me eleven hours to find the Abbott's tussock. As I deduced, his meandering route had circumnavigated his domain, but after springing a leg-hold trap, I crept through the bog. If not for the armored filaments I'd secreted into my flesh during my sweatshop stint, I would've lost the foot entirely.

Tall grass hid his estate from view. I pushed it aside and saw his community. Dangling from juniper saplings, like oversized fruit, were heads. Jeannies and Mollies and Ottos and Andys. Their eyes followed me.

Beyond them, hung harvested bodies, pieces missing, parts whirring. I'd been wrong. He wasn't in league with overseers and DevCos. He was mining dolls for parts. No wonder I'd been unable to identify his model. He'd retooled himself. But for what purpose? His words of salvation played in my head, filtered through this new knowledge.

The Abbott was trying to make himself into a god. Instead of co-existing with humans, he wanted to subjugate them--the way they had dolls. His circuitry was burnt.

I saw the sweatshop Molly: flesh shredded, limbs severed, eyes excised. The Abbott's hate pooled in her every wound. "How may I help? Help, help. How may I help?" she stuttered.

My knees gave. To create this... Maybe he was near human, to construct this abattoir.

I almost didn't see the Abbott's smiling approach, machete resting on one shoulder. If pierced, dolls do not bleed. Yet in ways we're more fragile than humans. We're cerebral, not visceral, and sometimes survival depends on viscera.

"You will be my holy logic," he said and swung his blade at my neck.

Sometimes, however, survival depends on careful preparation. The machete pinged against my reinforced skin and I kept my head. I hadn't had the Abbott in mind when I armored myself--how could I? I didn't know things like him existed--but that ping! made me almost grateful for my sweatshop days.

Surprise blossomed on the Abbott's face. Clearly, he'd never met a Jeannie like me. But then, I was an Artemis. Before he could recover, I put my back-up escape plan--the one to turn myself into scrap rather than serve as some kingpin's bot--into action. I plugged my cobbled-together surge amplifier--

into his closest port--

and blew out his circuitry.

I tamped out the small fire that caused and walked over to the shredded Molly, still begging to help. "Shhh. You're safe now; I'm here." I put my hand on her flayed cheek. "It's okay. I can rebuild you. You'll be better than new."

I looked at the other mutilated dolls. Those still functioning turned their faces toward me. I took a quick inventory. I could piece them back together--the way they were meant to be.

I went to find the Abbott's toolkit.