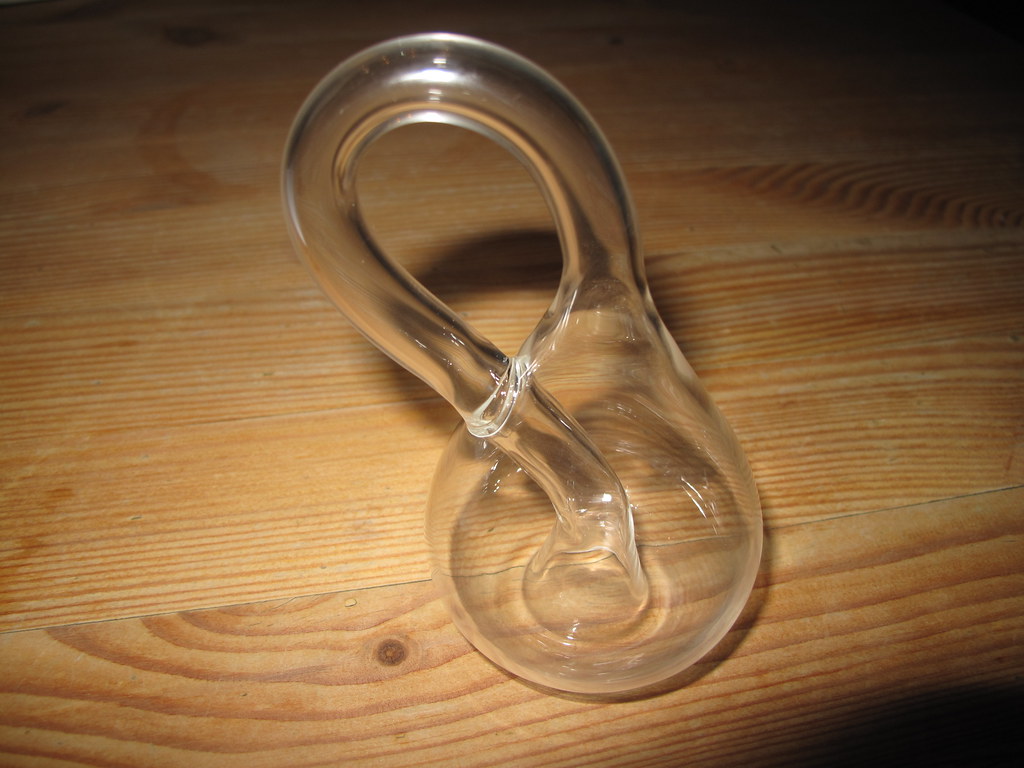 From the author: Everything worthwhile lies beneath the surface.

Twirling on the end of the long pipe, the blob of molten glass glowed a Creamsicle white-orange.  Ready for shaping.  Troy Hill pulled the bulb out of the crucible, filled his lungs and put his mouth to the pipe.

His surroundings faded away as he focused his mind on the sequence of lungs, pipe and glass; the physical effort, steady pressure from his diaphragm, pushing air through the pipe into the hot mass, shaping it as he wished. Precisely timed pressure, expanding the glass into a shimmering bubble, the parison from which any number of beautiful shapes might emerge. He turned the pipe steadily, balancing the viscosity of the material against gravity.

He could have blown the glass out into a big delicate globe, but this would be a sturdy vase and needed a thick bottom. As the red glow faded to a green oxide tint, he set the pipe on an iron brace and eased the glass back into the crucible to keep it from hardening prematurely. He took up the tongs and with a few deft strokes and three precise quarter turns, the product of endless hours of practice, drew out the neck of the developing vase into a quatrefoil. He brought it closer, used a flechette to incise decorative vertical elements.

Now he needed to break the piece free. Here was where most pieces got screwed up. Quick scoring and a few taps and the new vase came free; he held it up to the light and saw that it was a good piece. Symmetrical and balanced, but imperfect enough to show that it was handwork. The color wasn’t a plain beer-bottle green, but shimmering lines and mottles of dark sea green and near-yellow, like the sun through a forest canopy. He put it on the shelf for later finishing. As he relaxed from the two minutes of intense concentration, the noise and movement surrounding him rushed back.

Practicing his skill in public at the Louisville Renaissance Fair was something he had to be talked into. Hank Meretor, who owned the booth and produced the most elaborate pieces, had promised to teach him and pay him at the same time, and Troy expected to finish the summer with some spending money and considerable practical experience. So far, he was more of a gofer than an apprentice; half the day was gone running errands before he got to work any glass, and then only when Hank was busy hustling the customers. Right now, listening to the hurdy-gurdy, rebeks and tabers from the instrument merchant a few shops down (music which he privately felt sounded like cats being beaten to death with banjoes), and glancing around at fat, sunburned locals with paper crowns on strolling through the dusty fairgrounds, he wondered if he’d been suckered.

He looked up at the shop’s sign, spelled out in letters of blue, green and gold glass: In Vitro Veritas. It could be worse; there was a pavilion merchant on site called Past Perfect Tents. And the shop’s customers tended to have some appreciation of the art involved, even if some of them were inexplicably dressed as Klingons.

As soon as he got a grudging admission from Hank that he’d earned his half-hour lunch break, Troy hurried over to the Bull’s Head Tavern (the Fair’s premiere food-on-a-stick emporium) to see Amy Carmichael. Usually a bright spot in his day, especially when she wore the tavern owner’s idea of a serving wench outfit, which included a white chemise and a red bodice tucked under her breasts, propping them up as if they were a window display. A Renaissance clothing merchant had assured Troy this was completely wrong, and referred to the style as “tits on a tray”. Troy was less strict in matters of historical authenticity, at least where Amy’s breasts were concerned.

Today, as he approached the tavern, he stopped short when he saw Amy: she had eyes only for the tall blond vee-torsoed man in front of her, chatting and blushing like a schoolgirl. Both of them kept glancing down, he at her cleavage, and she at his velvet doublet and silk tights and what Troy felt was an excessive codpiece. (It had bells on it.) He recognized the guy as a performer in the Fair’s open-air theatre. Malcolm Something. Malcolm looked fresh as a daisy despite the afternoon heat, and suddenly Troy was aware of his own dirty face and sweat-stained shirt.  (Sweat-soaked, to be honest.)

Malcolm Something was idly holding an oddly shaped item of blue-streaked glass. It was the piece Troy was proudest of, an almost perfect Klein bottle that he’d made — after six failed attempts — for no other reason than to etch it with the legend Unending and give it to Amy with practiced casualness. Seeing its unmistakable shape up on the shelf at the tavern every day made him feel that their lives intersected. Surely she understood how the bottle’s single continuous smooth curve represented an unending sentiment. Now, as he saw Malcolm Something toss it from one elegant hand to another, he wondered if he should have been a bit less obscure in his declaration.

Malcolm handed the bottle back to Amy, who reached out an arm to put it back on the shelf, but now his hands were free to rest on her waist as he bent to whisper in her ear. When her hand left the bottle prematurely, to light like a bird on the man’s velvet shoulder, Troy was the only one who saw the bottle fall to the ground or noted the sweet bell-like tone as it shattered.

It occurred to him that a theoretical Klein bottle is, after all, nothing but surface.