C. L. made this story available for free. Say thanks by sending her a tip.    Send Tip

Jackson, staring down the specter of extinction, chose his own human host carefully. But not as carefully as he’s chosen his “daughter,” a 7-year-old girl who will become his species’ last hope.

From the author: Jackson has committed murder - but only in an attempt to undo genocide. Will his new daughter learn fast enough to survive in a world that wants her dead?

She will remember three suns.The first will tell her heritage; a scorching spark in a blue-violet sky, sharp black shadows cast on sea.

The second will tell her of her enemy, a yellow-white ball circling over human cities.

The third will show her where she must survive, a bloated ruby disk rising over a desolate waste.

It is too much to give a newborn, Jackson knows; on Homeworld, these memories would have unfurled slowly across the course of years. It was perhaps the defining gift of his species, to encode memory in molecules to direct the growth of a budding brain.

It is one of the gifts the humans never learned. On Homeworld, they would have -

But Homeworld is no more, and he has perhaps three days before the humans find him and his newborn child. So the infant brain will have to learn quickly, unfurling memories too fast, if she is to survive. If they are found before she is ready, he’ll have to kill her himself to protect the others.

He watches the small human form as she lies sprawled in the low light of the desert cave. Jackson has removed the helmet of her pressure suit, for he does not share the humans’ concern for the natal ecosystem of this world. The little girl’s chest rises and falls in rapid bursts, mouth puffing with the effort.

The host body was seven, in Earth years. It takes Bharatha only eighty-one days to make a revolution around its red dwarf sun, but the humans still count by Earth’s seasons. Why should they adapt to this planet? They will adapt this planet to themselves after they have learned what they want from its life.

Or perhaps sooner, if its life is dangerous. Jackson feels his lip curl, thinks of all the things humans didn’t learn about Homeworld before they fled and torched it. They had thought his people mindless parasites, an infection spreading through the water.

His people had made mistakes with their first human hosts, to be sure. They had not known how to manage the alien biochemistry, let alone how to stand, how to speak - or that the humans would kill them when they failed to conform.

To be fair, they had not realized that the humans were intelligent, either. They’d looked like so many mindless fish.

Jackson draws upon a human memory, a concept acquired from his host - the word ‘vampire.’

A demon-possessed corpse, originally. A creature that put itself in your body, and took you out. The humans had known nothing of neurology then, but they knew that they were not always in control of themselves.

The term seems appropriate for Jackson and his brood.

This little girl was seven, and so promising. That is why he picked her. She will be well-loved by those most dangerous to her, and her success in everything she does will come as no surprise.

Jackson sighs at the irony - that on this little world, the human rite of Upanayanam has become a true rebirth for some. A little girl and her parents came out here with him, for the ceremonial tour of their adopted planet. Something - someone - entirely different will return.

The girl’s body spasms in a seizure . That is a good sign. It means his child, one of a precious few seeds he has planted of his people, is integrating with the human brain. When the storm of electrical activity dies down, unless he’s made some crucial error, the child will sit up.

To run, to hide, to always conceal herself - this is the burden he confers with life. The humans would raze this world, too, like Homeworld, like their own colony world of Enlil, if they knew that anything from Homeworld had survived. So they will have to be very careful, this time.

It’s a shame, Jackson thinks, that first contact went so poorly. He turns his mind away from the unbearable loss of the World-Minds, of their uncounted billion agents. Keeps his thoughts carefully light: to what their peoples may have learned from each other, if they had not been so quick to bite.

He has learned from them because he has no choice. They will never learn from him; he cannot afford to teach them.

“Jackson” is as good a name as any for him to use among the humans. It was his host’s name. His given name is a tailored molecule, which his daughter will be born with on her tongue.

“He” is his host’s pronoun, too. His people had found gender in their lower hosts and discarded it as useless - but they had never encountered it in intelligent life before. There are some interesting things, he has decided, about gender.

If nothing else, he needs to understand it to survive.

The newborn shudders, moans. Strong enough now to follow programming he stored within her egg, she sits up.

Wide green eyes, the color of Bharatha’s sky, blink at him from a dark brown face. He tells himself he did not choose the host for her eyes, but for her family and her aptitude. He tells himself this, but still the eyes are striking. They set her apart. That will be useful, later.

The newborn is afraid and confused. It is no mystery why. She has a great deal of information and no context for it, a litany of facts and experiences and only a few minutes’ acquaintance with consciousness.

“Shh,” Jackson hushes her. If the two of them were human he’d hold her, but his people never did that. If they were on Homeworld he would release messages of love and care into the water for her to taste, but he can’t do that here.

Better that she start off learning human symbols, anyway. The less he confuses her, the better.

An awkward, strangled squawk from the girls’ larynx. It’s something.

He has three days to teach her to talk.

Miraculously, the girl is ready. Tears fill Jackson’s eyes as he watches her - tears of pride. He preserved his host’s emotional responses to help him blend in; and sometimes, he is glad of this.

He has found a way to preserve his memories of his people. A way to recreate, someday, what has been lost.

The child’s memories have unfurled enough for her to pass as human, and to know that she is not. More memories will come to her in her dreams - dreams enough to last her centuries. And she might have that much time. Shortly after puberty, they will teach her how to restore her telomeres, and control the aging process of her cells.

She sits beside him now, illuminated in a shaft of scarlet sunlight that pours in from the mouth of the cave. Her mouth working, limbs fidgeting as she learns her motor connections. She raises fingers to touch her own face.

Jackson remembers the alien sensation, the first time he touched his own. Skin that was warm and oh so dry, textured with hairs so fine the humans ceased to notice them. Fingers with bones in them like sticks to maintain form out of water; none of the nuance of pure-muscle limbs he possessed in memory.

The girl fingers her cloud of thick black hair, face expressing amazement at this newest fact. There was nothing like human hair on Homeworld.

His people have always been great, have always been so much more than their conquerors. The human science books say his species lived 38 million years to humanity’s own 2 million. Who knows if they are right? His people didn’t measure time like humans do, and the humans seem only to remember only personal lives. They rely on artifacts and research to know their ancestors.

Jackson shudders. He cannot imagine being so deprived.

The First Ancestor’s memories are his - millions or billions of years ago, the first mutant who passed a memory of fear. So too are snatches of his evolutionary history and the lineage of his parents stretching far, far to when his people looked and thought a little differently.

Then came the World-Minds, the curators. He’d remember more, perhaps, but they decided what was most important when they released his mother’s egg into the sea.

They gave him memories of them. Of being them. World-Minds, the massive brains whose exchange of knowledge made each moment ever-new. He remembers, dimly flashes of insight like prophecy and thoughts like an electrical storm. All that his tiny brain can perceive, he remembers.

He fights again not to remember too much, not to fall into the human trap of grief. Grief would kill him. His ancestors knew that, so they gave him the ability to turn it off. It was a fine line they’d had to toe in his design; remember, but do not give up.

His people were greater than the humans in all aspects - except that they lacked the discovery of fire. That simple gift of brute force, natural to a species who evolved on land and beneath the sea, had brought the humans across the stars and burned his people.

His people had mastered the powers of memory and time, of water and life. But the humans had the power of the sun, and the weakness of blind fear for their own survival.

Was that a weakness, or was it a strength? The humans had lost the opportunity to learn from his people, things that would have made them more than they could ever have imagined. But they’d won; and his people, slow to strike, had lost.

Someday, this child and his others will sow children of their own. Someday, his people will be numerous again. And their children will have the gifts of fire and water, of sea and sky. There will be new World-Minds, and they will cross the stars.

For now, survival is slow and never certain.

But he has time. He has nothing, if not time.

Jackson holds his daughter’s hand as they venture into the sunlight. The scarlet inferno of Agni is high in the west, the land that stretches before them is barren. Bharatha’s infant life has not yet ventured from the sea that gave it birth.

He wonders if it will survive human predation long enough to do so. The quarantine zone the ecologists enforce already leaks like a sieve.

He fixes the child’s helmet back onto her suit, triggering the vacuum seal. Reminds her not to break quarantine again in human sight, not to break any of the rules they imprinted in the human brain within her skull.

In time, her own neural tissue will overgrow the skull, replace the brain, and find niches in her bones. But for now, what is left of the human brain inside her skull is crucial to her survival.

Overhead, a ‘thopter wheels in the jade green sky. A rescue party, come to take them back to Bharatha’s domed cities. Ecstatic, no doubt, at having found the child alive.

Jackson waves his arms to hail them.

C. L. made this story available for free. Say thanks by sending her a tip.    Send Tip 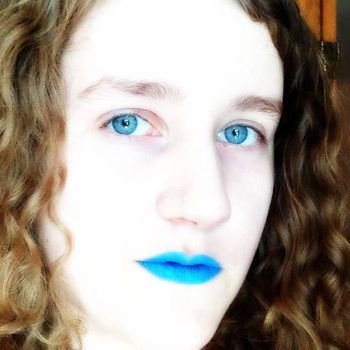 I aspire to be the eccentric lovechild of Octavia Butler, Greg Bear, and Frank Herbert.