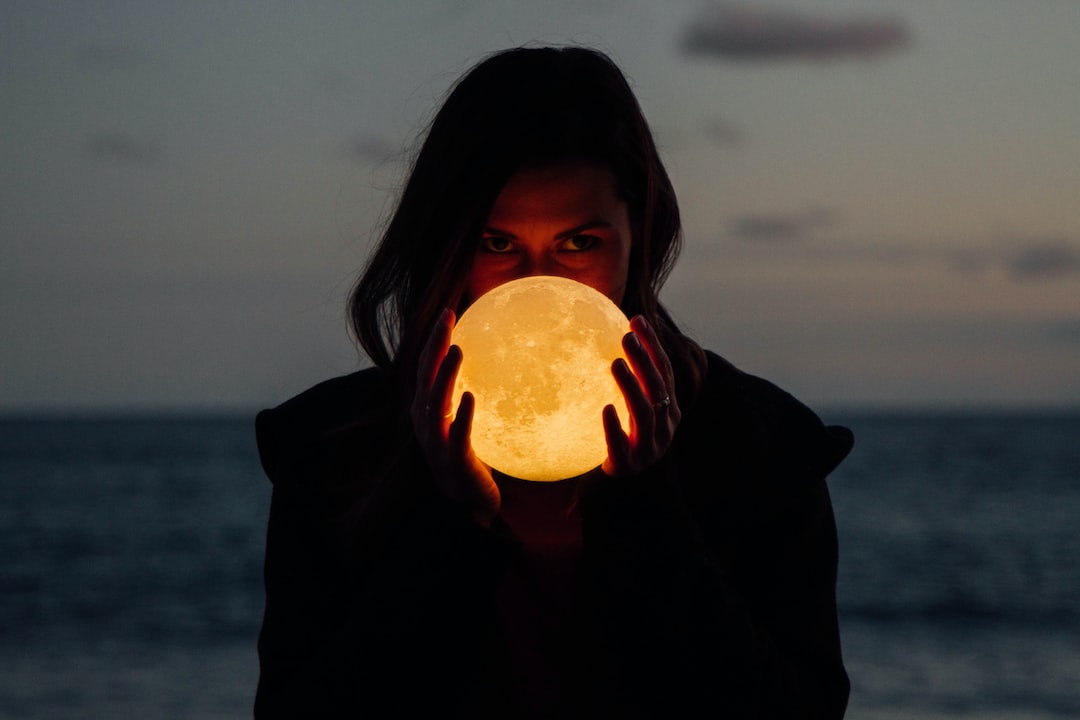 Photo by Drew Tilk via Unsplash.

From the author: I wrote The Moon Illusion as a way to make sense of my father's organic dementia. He moved near us after my mother passed, then in with us after a broken shoulder. Prone to flights of fantasy, my father was also a product of his culture -- lost to him after many years of estrangement from his family, as distant from him as another world. This piece first appeared in mixer (2012)

There are summer evenings when the moon stretches across the horizon, huge and white and hundreds of thousands of miles closer than it is supposed to be. It’s a simple illusion, contingent on conning the eye and the duping brain. But it is a persuasive deception. We want to believe the moon is right there. We want to reach out and grab it.

It was an evening like this when my 78 year old father fell out of his apartment’s third story window.

He called me from the ambulance; a paramedic dialed his cell phone for him. I heard the siren over his voice and imagined a hip, his spine, shattered like a porcelain teacup. I imagined his skull split open leaking brain fluid and blood. "No, dear," he said. "I'm fine."

The triage nurse called it a miracle. No bumps, no bruising, no bleeding, inside or out. My father flexed his arms and legs, fingers and toes for the attending physician. She asked him his name, the year, who he voted for, but could find nothing wrong with him. No contusions, no scrapes, nothing.

The doc wanted to keep my father overnight for observation. She shook her head. "Sir, you are unbelievably fortunate," the physician said. "Someone up there likes you." Then she left us alone.

"Thank you," he muttered as the doctor closed the door. “I hope so.” Then he looked at me. "I was trying to call them. I must have fallen."

"My people. Our family," he said, and pointed up. “Did you see the moon? I leaned way out the window to get a clear view of it. It distracted me.” He sat back on the examination table and continued. “It's not like I was in any danger. I started to fall, I quick curved space beneath me." Then he smiled. “With my mind.”

This reassured me. Under normal circumstances, my father was prone to make such proclamations, pieced together from science fiction movies and talk radio, inspired by the Bible and various forms of personal divination. He kept two small pebbles in a nitroglycerin pill fob hung from his neck for impromptu scrying. Since my mother died, my father had gotten more insistent with his peculiar assertions; I more permissive with him than she had been. He was, after all, my father, and now there were just the two of us.

“With my mind,” he said, testing my reaction. “I was calling on them for you.”

“For me?” I asked. Permissive.

“I’m not going to be here forever,” he said. “People with no family flap around untethered, do stupid, careless things."

"Like fall out a third story window?" I asked. I was not infinitely permissive.

My mother worked hard to make me the kind of person she was, strong, independent, logical and reasonable, rational and calm. The kind of person who would protect my father from himself. So far, I didn't seem to have done a very good job.

"I'm not going to be here forever," my father repeated. "If I call them, they’ll come for you."

Worry and exhaustion made me angry. "Dad," I said. "I don’t want anyone to come for me." There was obviously more I could have said. Maybe I should have.

My father shook his head. He'd already decided. "You've got to get me out of here tonight," he said. "I'll sign anything they want me to sign. I don’t want to stay overnight."

"I'm fine." My father put his hand on my cheek, knowing I'd give in. "You are so much like your mother," he said. "But there's something of me in there."

I sighed. He was my father, after all. His toes, purple-veined and yellow-nailed, stuck out of the blanket.

“I always wished I told you," he said. He looked at the window. He couldn't see outside, just himself, reflected back in. "Where you come from, what you are. Half are. What I am."

"What are you?" I asked, tucking the thin hospital blanket back around his feet.

When my mother was alive, she’d quash my father’s ideas before they had time to root into theories. He’d still blurt one out, trying it on for size, but he kept them quieter.

My mother worked hard to make me the kind of person she was, the kind of person who could hold a job, who paid the bills and donated to charity and returned lost wallets. She taught me to read and hold a pencil, to remove rust and lime scale, how to separate my garbage for recycling and cook a turkey.

I gave in. I released my father into my own custody with my power of attorney. The nurse shook his head as I signed the papers. "I think as the daughter, you're too close to see," he said. He handed me a paper bundle of medicines for my father--red ones he was to take before bed, half a white tab to take in the morning.

During the taxi drive to my house, I snuck looks at my father.

"It's hospital or my house," I said, trying to evoke my mother’s tone, postures. "Those are your choices."

Outside the window, the moon was high and bright, a dot at its zenith. My father craned his neck to see it. "Look at that," he said. "It's so far away now."

"Actually," I said. "It's 4000 miles closer now." I patted my father's hand; he looked so sad, so lost. I tried to console him. "It's a Ponzo illusion; tricking us into thinking the moon is closer when it's low."

"So much like your mother," my father said, lost in his ideas, in his theories.

I was exhausted from anger and worry. The moon did look so very far away.

I felt like I didn't know anything. Instead, I answered, "It's late. We're tired."

I gave my father my bedroom. I tucked a quilt around his legs, kissed him, and shut the door.

My mother taught me hot and cold, right and left, to change a tire and sew a button, hands-only CPR and to balance a budget. But my father taught me things too: to stand an egg on its end, to fold a paper hat and a napkin chicken, spin a pen. He hoped one day I’d burp all the words to "Scarborough Faire” in concert with him.

I lay down on the sofa and fell asleep immediately, dreams of falling out of third story windows, dreams rushing at terrible speed.

The pounding on my door pulled me out of my dreams.

The police found my father crouched on the flat roof of the dugout in the elementary school ball field. I don’t know who called it in.

"It's not that high," the officer said as we walked the two blocks to the school. "But I'll be damned if I know how a man his age got up there."

They used two firemen and an engine truck to ease him down. I huddled inside my bathrobe and gravel rattled around inside my slippers.

EMTs shined penlights into my father's eyes. They were extremely dilated. His dark pupils reflected the moonlight.

"I can see fine," my father insisted.

The EMTs asked me to list the medicines the hospital sent with us. They nodded at each one, “Fine, fine.” His blood pressure and heart rate were all fine. He was alert and responsive. Except for his eyes, they couldn't find any reason to take him in.

“Unless,” one of them said, and looked pointedly at me.

I was too permissive. I shook my head at them, and then they all agreed among themselves, “OK, no harm done,” but they didn't want to see my father again that night.

I wrapped my robe around my father's shoulders, signed the papers to release him into my protective custody. Then the trucks drove away into the night.

"I’m fine," my father repeated until he was sure we were alone again. Then he looked at me and said, "I almost had them."

"Dad," I began, but I didn't know what to say next. My mother hadn't prepared me for anything like this. "You're going to get yourself hurt." I tried to sound like my mother, but my voice squeaked like a child. I burst into tears.

My father wrapped his arms around me, and I wiped my nose and eyes on the sleeve of my robe.

"You're going to get hurt," I sniffled.

I was worried, exhausted, and angry. I sat down in the damp grass, the moon sinking back to the horizon, growing ever larger.

My father lowered himself down next to me. "So much like your mother." He touched my cheek, dabbed at a drying tear like it was something precious. "But there's some of me in there."

I didn't answer that. I picked at the grass with my fingers while we sat and watched the moon inflate in black sky.

"You know, it's not conclusively a Ponzo illusion," my father said. "It has to do with the flattened dome of the sky and the earth’s elliptical orbit and the July apsis.” He sighed. "But, no one knows exactly what it is. But I don’t think it matters. It just is." He patted my leg. “Darling, some things you just have to believe.”

My mother taught me how to swing a bat and drive defensively, how to smell bad milk and tap ripe melons, but my father taught me to hang a spoon off my nose. He taught me to leave bread and milk for the fairies and to hold my breath passing a graveyard. My father wore every bad tie and foul aftershave I ever bought him, carried drawings I made in his wallet.

The older I got, the more I understood why she worked so hard on me. I could be like my father.

He taught me to blow notes through blades of grass.  I held up a blade, split it just so, and blew.

"I know, Dad," I answered. Under such a big moon, anything seemed possible. "I know."