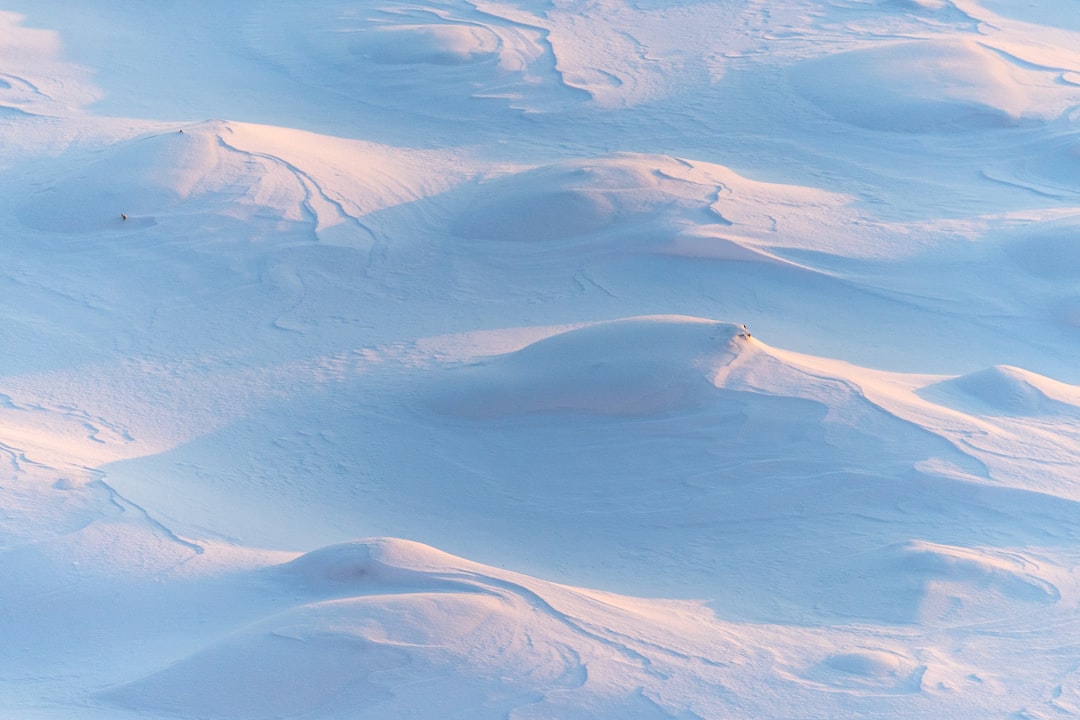 Photo by Ant Rozetsky via Unsplash.

From the author: A planetary survey team experiences unexpected crises.

Planetfall succesful.  Atmosphere breathable, as anticipated from earlier analysis.  Base establishment under way, following standard protocol.  Work is slow, given we're a five-man crew, but no unanticipated challenges yet reported.

Landscape is surreal.  Frozen drifts and billows, like snow back home, but when you look just off of straight there are rainbow spectra dancing in the crystals.  Winds are constant.  Science Tech O'Malley reported hearing voices when she went outside to set up the solar panels, but the doctor assures me it's just the change in aural input after so long aboard ship.  I'm confident initial planetary analysis showing no sign of intelligent life was accurate.

Base operational, but not optimal.  Solar energy collectors hampered by constant snow accumulation.  Panels have been re-oriented to discourage build-up, and shifts have been instituted to clear off what does pile up.  We've begun local reconnaissance on foot.  Until proper energy levels are established, use of mechanized transport is unfeasible.  The snow's spectral light phenomenon appears to intensify during nighttime hours.  Still awaiting confirmation of original transmission.  Are you receiving?

Despite re-orientation of panels, snow accumulation has not decreased, and panel surfaces are sustaining damage.  This snow has abrasive properties not previously anticipated.  Energy reserves are now below sixty-percent of recommended.  O'Malley continues to report hearing things and is no longer permitted alone surface-side, after attempting to follow the sounds out of range of communications.  The doctor has prescribed sensitivity dampeners.

I have not told anyone about the sounds I hear on my own panel-clearing shifts.   I prefer to remain un-medicated.

Reconnaissance has been curtailed for the moment to focus on snow abatement.  Techs Akira and Butler are working to find a reliable countermeasure, but as yet have had no success.  Study of atmospheric data shows no sign of any foreseeable change in weather patterns.  If no solution is found, I'm afraid I'll be forced to order the termination of this mission.

We didn't know he was missing until he failed to return from his nighttime clearing shift.  I attempted to track him, but the colors in the snow hid any footprints, and the farther I got from base . . . Well, up to this point, I believed the sounds I was hearing were environmental, but now I swear there are words . . .

Belay that last bit.  No, Doctor, I don't require any dampeners.  See to O'Malley.  She and Butler were close.  Please shut the door behind you.

Energy reserves have dipped below forty-percent.  O'Malley is begging to go after Butler, even with an increased dosage of dampeners.  The doctor has been drafted into panel maintenance, over his objections.  We can't risk letting O'Malley outside again.

Captain Halstone requesting immediate evacuation.  Before we lose another.

Dampeners weren't enough.  This morning, O'Malley vanished.  Left during my shift and I never saw her.  Never heard her.  Just those damn lights.  I see them on the backs of my eyelids whenever I close them.  Akira says he hasn't gotten more than three hours of sleep in the past two days.  I'm not much better off.  As for the doctor, he won't talk about the lights.  Won't talk about anything.  I saw him dosing himself with dampeners, though he claims he doesn't hear the voices.

Power reserves at fifteen percent, well below emergency levels.  Both Akira and I have triple-checked communication mechanics.  Everything is in working order.  Why aren't you responding?  Send help now.  Please.

Found the doctor dead in his bunk this morning of apparent dampener overdose.  Energy reserves at three percent and falling.  The cryo-chamber won't last once they power's gone, so we've buried him in the snow just outside the exterior hatch.  His family would wish to have his remains, if anyone should hear this message.

Akira thinks the voices may be originating from a point southwest of base.  Remaining here is no longer an option.  If there's something else alive out there and we can find it, then maybe we have a chance.

This will be the last communication.

We stagger together through a changed landscape.  The snow-light is no longer a mosaic of scattered crystal prisms.  Instead, a bright rainbow band spreads across the drifts, leading us southwest.  I wouldn't believe it if Akira didn't see it, too.  Our feet sink in with each step down the golden path in the center, and we cling to each other for support.

My own voice, like a dream, Awaiting confirmation of transmission . . . Are you receiving?

I hear O'Malley, too, and Butler.  You're almost here, Captain.  Just a little further.  Akira, we're so glad you're coming.

Just ahead, the rainbow narrows until it vanishes in a pool of silver light.  Two familiar forms stand with arms outstretched, their bodies rimmed with kaleidoscopic auras.

Akira squeezes my arm.  We head for the light.

I don't know what's on the other side, and I don't know if we'll ever return, but I'm telling the wind our tale, hoping it will sing until someone comes after us.  Someone who can bring the story home.