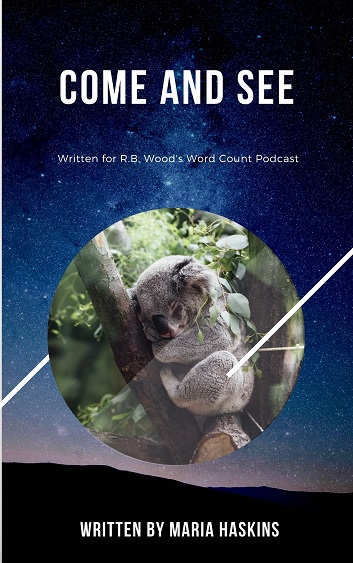 From the author: A new flash story, written for The Word Count Podcast.

(This is my latest story written for R.B. Wood's Word Count Podcast. You can hear me read this story too. Listen to the episode.)

Every night when Leyla falls asleep in her bunk aboard her parents’ old space freighter, she hugs Bear close. She burrows her face into Bear’s plush grey fur and imagines she can smell ash and smoke, the tang of war, a burning planet, the hot metal of robot enemies set ablaze. Just like in all those entertainment vids about the Exodus from Earth that she’s not supposed to watch because she’s too young.

Of course, she doesn’t really smell those things in Bear’s fur. Bear has been cleaned and sanitized and packed away in storage for so long that any trace of scent is surely gone by now.

“You shouldn’t have given her that old thing,” Mama said to Grandma when she gave Leyla the plush toy for her eighth birthday. “It’s an antique. We could trade it for credits and supplies.”

“It’s an heirloom, not an antique,” Grandma retorted. “And it’s mine to give away as I please. Our distant Mother from the Long Ago was just a child herself when she carried Bear through the fires of rage and ruin, onto the last transport to leave Earth in the Exodus, and it’s only right to bring Bear out now, in times like these.”

Mama had nothing to say to that.

Every morning when Leyla wakes, she holds bear up to the porthole and whispers into the tufty grey ears, come and see.

Mama and Papa whisper those words to each other every day. The words are whispered everywhere, in all systems they pass through, on outposts and on space stations, on planets and satellites.

For as long as there have been trade routes between systems and planets, Mama’s and Papa’s families have plied those routes. Shipping or smuggling whatever can be shipped or smuggled, for whatever price might be had, working for corporations and governments and rich people. But this trip is different. Outside the ship, space looks the same as always, but Leyla knows they are going somewhere not even Grandma has been before.

“There’s no money in it,” Uncle Remos said when Mama talked to him last at the communication nav. “I don’t understand why you’d willingly step into a trap laid by some rogue AI and an army of robots that will surely tear you apart.”

Mama shut off the transmission when she saw Leyla listening.

Of course, Leyla knows about Earth. Everyone knows that once upon a time, all people lived on one planet, as strange and unlikely as it sounds. But then the robots and AIs rebelled and set Earth afire. In Leyla’s school vids, it says the robot forces drove out the humans and stationed sentinels in orbit, along with a whirling cloud of nanobots to guard the way to Earth. None have gone there since.

Not until now, when a new call has come from a planet that should be dead.

“Are there still robots there,” Leyla asks when she sits with Grandma, scooping stew into her mouth with Bear watching.

“Is that who is asking us to come and see? A robot?”

Grandma looks away, and they eat their stew in silence for a while.

“There were animals on Earth, too, not just robots,” Grandma says. “That’s what the old stories say. And not just animals like the ones we know. Not just pets and pests. Not just farm animals. Earth was full of creatures that had their own lives, their own purpose, that belonged there as much as we did.”

Grandma nods. Leyla tries to imagine Bear, not as a stuffed piece of plush fabric, but alive. A creature with their own life and purpose.

Leyla and her family travel a long time toward that one yellow star that holds Earth in its orbit.

“Listen,” Mama says one day and turns up the volume on the incoming repeating call that is ever stronger and ever more frequent here. And in all the ship’s speakers a soft electronic voice speaks the message in languages that are familiar but seem oddly out of tune to Leyla. And in every language, the words are the same:

Leyla stands beside Grandma at the porthole, arms wrapped around Bear.

“I’m going to tell you a story about Earth,” Grandma says to Leyla. “You haven’t heard it before, but people have passed this story down through all the ages, even when many would have preferred it to be forgotten. Your Mama and Papa know it. So do others, though many would deny the truth of it.” Leyla listens, and so does Bear. “Earth burned,” Grandma says. “that much is true. It was dying. But it wasn’t the war with the robots and AIs that did the damage. It was people. We were destroying it. The story says we tried to change. We set up AI networks, robot forces, designed nanobots to help save what could be salvaged, but it was too late and, in the end, the robots decided to drive us out in order to save what might be saved. They cast us into space, and we’ve been wandering the black ever since.”

Outside the porthole the planet slips into view. It is all shades of green and brown and blue and white. Leyla holds Bear tight while they descend toward the surface.

When the ship’s door opens, Leyla asks Papa again if she needs an exosuit, but he says the atmosphere is safe, and in front of Leyla, the ship’s ramp unfolds to touch the ground.

It is quiet, except for the wind, but it seems to Leyla that she hears the whispered words anyway:

Leyla hugs Bear close and breathes in the air. It holds no trace of ash and smoke, no tang of war, and she thinks how strange it is that she has never been here before, but Bear has. Once, a girl carried Bear away from here. Now, Leyla is bringing Bear back.

“Welcome home, Bear,” she whispers and steps outside.

Cover art made by me, using Canva.