The Crow in the Pine 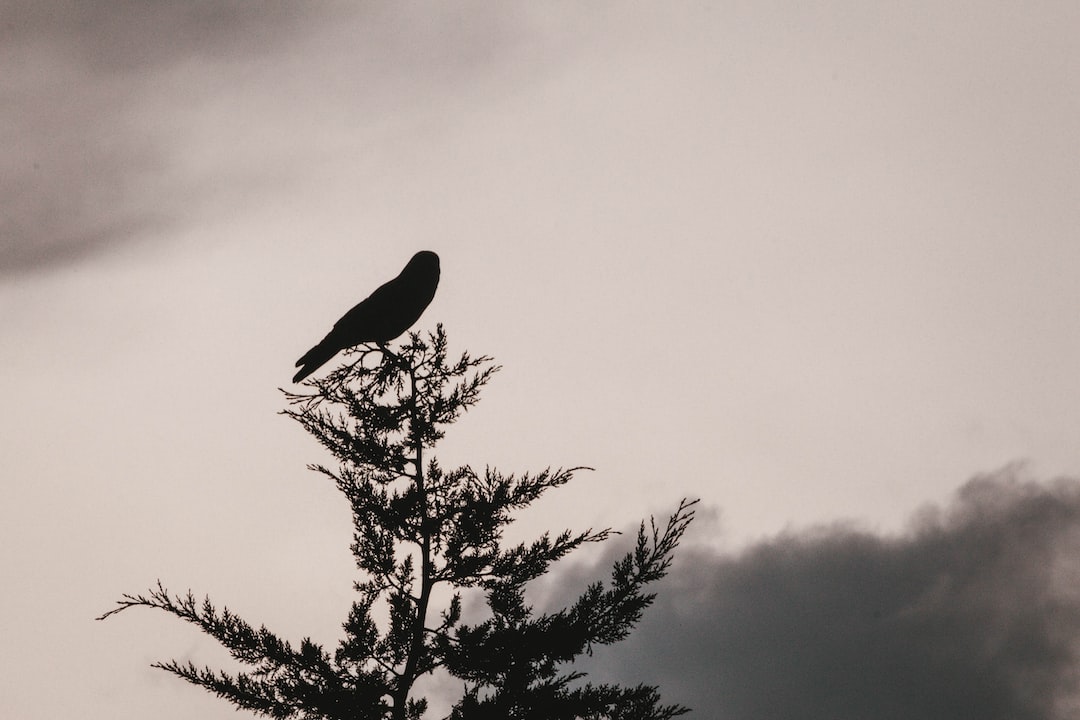 Photo by Aditya Vyas via Unsplash.

From the author: A crow with a penchant for shiny things builds a collection of sentimental objects.

These people who deem themselves experts on other creatures while still being so ignorant of themselves will offer plenty of logical explanations for our attraction to things that glitter and gleam in the sunlight. They'll say that it's mere curiosity and seen only in adolescent crows. They'll say that we're only pecking at these things to see if they're edible. They'll say that the fairy-tale image of crows hording wealth in their nest like a dragon's treasure is just that: a myth.

That may be true of others, but they've never seen my trove.

The first thing I stole was a bottle cap.

A boy and a girl sat upon the old wooden bridge, swinging their legs over the side. The boy popped the bottle cap off on the edge of the handrail, and it skittered along the weathered planks, rolling and hopping like a bicycle wheel before coming to rest on the muddy banks. From my perch atop the pine tree, I watched it, tipping my head from side to side to make it glimmer and sparkle. My claws twitched with need, my wings rustled for flight, but I held back. I'd seen boys before, boys with stones that they'd throw at my kind when we dared to venture too close. This boy, though, didn't seem interested in tormenting birds. His gaze shifted smoothly back and forth from the river to the beverage to the girl, as if those three things comprised his whole world.

Soundlessly, I spread my wings and glided downward. I kept one black-marble eye on the boy as I pecked at the cap, tasting its sharp, metallic edges and the bit of sweetness still clinging to it. He took a swig of the soda and offered it to the girl. Their fingers touched, and she looked down, blushing pink. With a burst of power, I flapped away, and only then did the two on the bridge pay me any mind.

Next, I stole a gum wrapper, which crinkled pleasantly and tasted of summertime and mint.

The boy and girl were tall enough now to lean over the bridge's railing as they jabbered about whatever it is that boys and girls talk about (how would I know? I'm just a crow). I'd barely even noticed them until the boy pulled out a pack of gum and removed that lovely, shiny, brilliant piece of paper.

For years the cap had kept me happy, glistening there among the twigs of my nest. But that paper — oh, that paper! When it slipped from his hand, I found myself falling, diving down to snatch it up before the wind pulled it and the river soaked it and the current carried it away. They noticed me. They pointed and exclaimed as they smacked their teeth on the gum. Fortunately, the boy was older now, much too old to be hurling rocks. When he tired of tracking my progress across the sky with his finger, his hand came to rest on the girl's. She looked down, blushing pink.

Years later, I stole a ring, small and round, with a single sparkling stone.

Like many thieves, each crime made me bolder. The boy held the ring in his shaky hands as he knelt down before the girl on the bridge. I leaned in, feathers twitching, and it slipped from his fumbling fingers, I let out a caw! of delight. Before it rolled off the edge of the bridge, I dove down to seize it in my claw.

The boy shouted and shook his fists, jumping up to snatch at my tail feathers. I laughed. He was too slow to catch me. The prize was mine, cold and glittering in my grasp. The boy turned red with fury, but the girl took his hands, looked down and blushed pink. With a word from her lips, he forgot all about me.

A few years later, I stole the favorite piece of my collection: a tiny round mirror within which I could see my own black eye.

It had been attached to a baby buggy, one with soft pink-and-blue animals cavorting along its side. The mirror was positioned in front, just out of reach of ten tiny pink fingers that gleefully reached for it. The boy and girl took turns pushing the little buggy over the bridge and down the lane. Each time they passed, I watched those ten tiny pink fingers wriggling in that mirror and thought what a shame it was that the mirror was set only to reflect the image of that small, squirming human. Such a glass deserved a nobler subject, something bold and brash, like a crow.

So when the boy and girl stopped on the bridge and turned to look out over the water —their hands clasped and their cheeks blushing pink, I stretched out my wings and relieved them of the mirror. The child squawked, as if trying to scold me in my own language, but I pretended not to hear it.

For a long time, I saw neither boy nor girl nor baby in the buggy. When I finally did, I stole my last treasure.

At first, I didn't know what it was, clutched so tightly in the girl's hand, as she held the pink fingers of a small boy in the other. She knelt beside him, just as so long ago her boy had knelt before her, but instead of diving in to snatch up this newest treasure, I just watched.

I'd like to say that it was because I had grown less greedy with age, but the truth was, I had only grown older, more tired. The little boy closed his pink fingers around the shining, metal object, and then, at his mother's direction, drew back his arm and tossed it over the side of the bridge.

They must have known I was there, for they didn't bat an eye when I instinctively dove from my perch. I snatched up the shining object just before the river could swallow it. High up in my nest in the pine, I turned it over, studying it. It was a heart-shaped medal, with words on one side, and a thick ribbon of royal purple attached.

The girl and her boy watched me, just as she had watched me with her other boy, the one that was no more. Shifting from foot to foot, I considered my treasures. Then, with a selflessness most un-crowlike, I gathered the cap in my beak, the wrapper and ring in one foot, and the tiny mirror in the other. Wobbling from side to side, I glided down and landed on the bridge beside the girl and her boy.

With a single caw! I dropped my treasures—their treasures, really—at their feet. The girl blushed pink and the boy tipped his head just as I always did when presented with a puzzle. And when the girl stooped to gather my offering, I startled and flew away, not so much out of fear, but out of habit.

From my perch in the pine, with the medal at my feet, I watched the boy and the girl cross the bridge one last time.