From the author: Originally published in the March 2019 issue of Apex Magazine (issue 118), it's a flash piece about a father's obsessive and insatiable grief over the loss of his son, and where his grief takes him as he's unable to move beyond it.

This one was made of glass. He wasn’t all that similar to my son, but he was sweet with a high, gentle voice like wind blowing across branches. I had gathered all the glasses my son had once drunk from, cartoon characters emblazoned in cheap heat transfers, which I had to pull out of the crush before melting. I gathered memories of gentleness, breathed my nostalgia and love into the vessel as it cooled.

He tripped while running to hug me, arms full of summer huckleberries, and broke in half. The purple juice ran down like so much blood, and I rushed over to kiss his forehead as his light faded. I buried him next to my own, a simple stack of rocks for a marker. I hadn’t gotten around to giving him his own name.

This one was made of the old toys I left sitting in my son’s room, a layer of dust caked over every piece. I had neglected the keepsakes of my child. I stacked the toys on top of one another. A train here, a stuffed animal, a plastic dinosaur. I breathed in memories of the times I had ignored my child; the times I had worked or watched TV when he wanted to play and have company. I breathed in my guilt, and with each breath, the figure bound together.

He was never particularly happy. I named this one: Benoniy, son of my sorrow. He tried to hang himself, and I came home to find him dangling from the ceiling, disappointed at his failure. He snuck out while I was asleep and jumped from the cliff. He burst apart, the vessel flung across the stones, shattered. I buried him next to the sweet one of glass, his name marked out in wooden letter blocks for a headstone.

This one was made of my son’s old dog. A mistake. I breathed in nostalgia to the old man while he slept. When it was done, he woke with a start and began wailing, no longer the dog I or my son had loved. It was new, and filthy. It walked with its side on the floor and its back on the wall, screeching like a pained infant. It ate and scratched itself to thrashing stubs that did not bleed, and I buried it without a marker, far away. When I walk by, the ground still shudders from below.

This one was made of the sand from his sandbox. He whispered soft, kind things and liked to lie in the sun. I gathered the sand inside, mixed it with water and molded it to the shape of a child. I brought it memories of summer and breathed in all my fatherhood and urge to nurture. When it was done, he reached out and held my hand while I wept. After, he walked to my son’s room and asked if he had a brother.

He would come to my bed crying and ask to sleep next to me. He asked me about Mommy and where the other boy was, if he had a brother. He wanted to go grocery shopping with me, go to school and the park, everything little boys do. Everything the fraction of my son within him softly sighed at night.

I was forced to arrange grocery delivery, and put on an act of homeschooling him. I would sing “You Are My Sunshine” while I cooked my breakfast and pretended to cook his. I don’t know if he really thought he was eating, or if he was just humoring me. I never knew with any of them.

He lasted the longest, till summer suddenly ended in a flurry of storm and he washed away in the rain. If he screamed, I never did hear it. They all spoke so softly. Abiram was his name. Marked but unburied.

This one was made of my son’s clothing, stuffed with grass from the back yard around his playset. I took him inside, a scarecrow in miniature. I gathered memories of fall and breathed in my longing and comfort. He sat up with a sound like hushed breath, the steady breathing of falling asleep on the couch with a mug of hot tea. He put his head on my leg.

He too lived a long time. Benton, I named him. Every night he had me read Where the Wild Things Are to him, and he would fall asleep in my son’s old bed. At night, I would watch him and for shards of an instant, I would really believe it was my son there, till he shifted with the crackling of dry, scratching hay.

Benton had a bad day, once, where I refused to let him come with me on a trip to town, to take care of errands left for far too long: the bank, the doctor, to see my accountant and try to piece together the mess of my taxes that year. He ran out of the house and got tangled in some blackberry vines a mile down the road. I looked for him for days. By the time I managed to find him, the rain had rotted him and the mice and rabbits had pulled the grass from him for their nests.

I buried him next to Abiram, my son’s old hat as the marker, placed on two sticks tied into a cross.

The next was made of my son. I pulled him deep from the ground and took him—parts of him. A leg, an arm, some ribs and flesh. I made my son in miniature as best I could, then filled the vessel with more of my guilt than I ever had before. Only guilt. Whatever memory I put in was not good, not right. The gnawing voice deep in the consciousness. The stitching was tight, the proportions uneven, not to mention the smell. Or my own aversion. When the ritual was complete, it sat up and simply followed me with its gaze.

I would find old pictures thrown down, frames broken and glass stabbed into the faces of the photographed. My son’s books ripped in half, his childhood forks and knives bent and twisted.

It mutely followed, clinging to my leg when I stopped moving. It wouldn’t (pretend to) eat, it wouldn’t (pretend to) sleep. At night, it would stand at the foot of my bed and stare at me. By the end of the week, I could no longer stand it and I tied it up in a clearing in the woods. I poured gasoline over it, then burned it. It stared at me silently.

I did not bury it.

This one will be made of myself. For this, I have to be a dead thing, a mute thing, just as all the others (except the dog, oh yes, the dog, but he was a mistake). I have dug a shallow grave and I pull the dirt in over myself. I want to push my way out to the air, but I force everything back down. After a while, the panic leaves and rushes of chill wash over me, calming.

My heart finally begins to slow. I whisper deep into myself, my dying system, all my shame, all my guilt, all my anger. In the gray, I saw God dancing around the coffin that once held the bones of my child. As I dim to nothing, I realize I forgot the crucial remnant: I no longer remember my son. 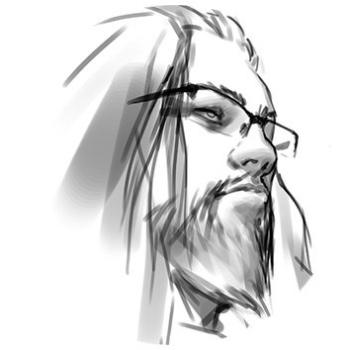 Ben Serna-Grey is working through some stuff, often by way of worryingly depressed robots.