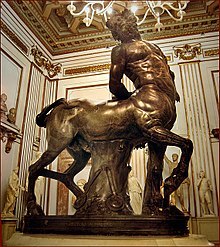 From the author: Inspired by a celebrated work of art, a group of schoolgirls speculate about sexual experience.

“What isn’t?” I asked. We were in the National Gallery, and the huge painting in front of us was Piero di Cosimo’s ‘Fight Between the Lapiths and the Centaurs’.  There was a lot going on. Flying hooves, severed limbs, upset winejugs. One portly centaur had his arms round the waist of a fleeing naked woman.

“Everything all right, girls?’ said our teacher, Mr Baines. He had heard the hysterical laughter, and had probably caught the word rape too. Diane had a carrying sort of voice.

We assured Mr Baines everything was fine, and bent our heads over our worksheets again. But later, at the back of the coach, the discussion continued. Diane said the centaur’s human arms were too far away from its horse-dick to be useful. And without the arms, it couldn't  rape anyone.

Jane, who went to riding lessons every Saturday, said she had once seen a stallion ‘cover’ a mare, and he had used his teeth.

“Q.E.D.,” Diane said triumphantly. “A centaur doesn’t have teeth. At least only human ones, which would be no good at all.”

I pointed out that ‘Fight Between the Lapiths and the Centaurs’ looked like an attempted gang-bang; perhaps the centaurs had been planning to help each other out.

We talked about sex constantly in those days, although none of us had done IT yet.  We were all, with the possible exception of Jane, a bit confused about the mechanics of IT. But we researched energetically,  pre-internet of course. One girl had borrowed a porn mag from her brother; we  thought  the act looked gross. ‘Lady Chatterley’s Lover’ made the whole thing sound more fun. Diane had started seeing a local boy, whom her parents described disapprovingly as rough (Diane said they meant common, but didn't dare say so), which should have been helpful to our investigations, but so far her dates hadn't yielded much information.

Sometimes the discussions were serious, sometimes not. “Suppose you wanted to seduce a centaur?” I asked in the lunch queue. “A romantic night out. What would you have for dinner?”

“Bran mash as a starter,” said Jane.  'Then steak and chips. An apple for dessert. And pony nuts with your coffee.”

We demanded details about Diane’s boyfriend. We were envious of her opportunities, awed by her nerve, and a little scared for her too.

We squealed, and insisted on knowing more.

“Well,” she said, “he's big —” Shrieks. “You've got dirty minds,” said Diane, with a look of false virtue. “Of course I meant tall. But he's also hairy—” We insisted on knowing where he was hairy, but all Diane would say was “he's hairy in all the places I've seen so far”.  She added primly, “And he's only got one thing on his mind.”

This was quite delicious, and we continued to follow the relationship as avidly as a soap opera. But one morning, Diane came into school wearing a look of Homeric wrath.

“So?” said Jane breathlessly. “Did he ravish you like a Lapith woman?”

“I kicked him in the pony nuts,” said Diane, and dissolved into shaky laughter.

This story originally appeared in Wrath anthology from Pure Slush.