Nancy Jane made this story available for free. Say thanks by sending them a tip.    Send Tip 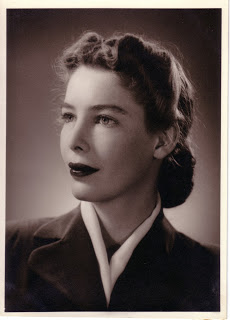 From the author: This story is about my mother and me. It's flash memoir, not fiction, though of course all memoir is filtered through time and likely has fictional elements. It's an old story. I'm still technically a spinster, but I'm also in a committed relationship. The picture is of my mother at the age of 23. My mother loved this story. I never showed it to my father.

I've had cats ever since. But I never did find a husband.

My grandmother was the only person who ever made a big deal about me being single. Though older men still ask me, “How come a nice-looking woman like you isn't married?” I think they're flirting.

The stereotypes still haunt me. I'm a maiden aunt. I have a nephew – a grown nephew.

The OED says a spinster is “an unmarried woman, especially an old maid.” But the first definition is more interesting: “A woman . . . who spins, especially as a regular occupation.”

A woman with an occupation. An independent woman.

Jane Austen wrote of spinsters with no income, living in tiny bed-sits or totally depending on the largesse of a brother-in-law. Her characters got married for solid, economic reasons.

In the 1960s, a study of teenage girls found that 5 percent did not intend to marry. The study labeled these girls “deviant.”

I wasn't one of them. I always thought I'd get married someday. I just never got around to it. I was too busy having a life.

Several years before she died, my mother and I were talking. She said, “Oh, 1946. That was a crazy year. I was so confused.”

I said, “Were you trying to decide between marrying Daddy and some other man?”

She said, “I was trying to decide whether to get married at all. I was working on the San Angelo paper and loved my job. But I was getting a lot of pressure from my parents to get married. My father kept referring to all my unmarried friends as ‘that old maid.’”

I said, “Are you sorry you got married?”

She didn't answer me directly, just smiled and shrugged.

My parents were married for sixty happy, tumultuous years. But my mother never once asked me when I was getting married.

This story originally appeared in Flashes of Illumination.

Nancy Jane made this story available for free. Say thanks by sending them a tip.    Send Tip

When we started Book View Cafe, I posted a flash fiction every week. About half of them were reprints, but the other half were written on deadline. This collection includes all of them.

Nancy Jane Moore writes all kinds of speculative fiction at lengths from flash to novels.