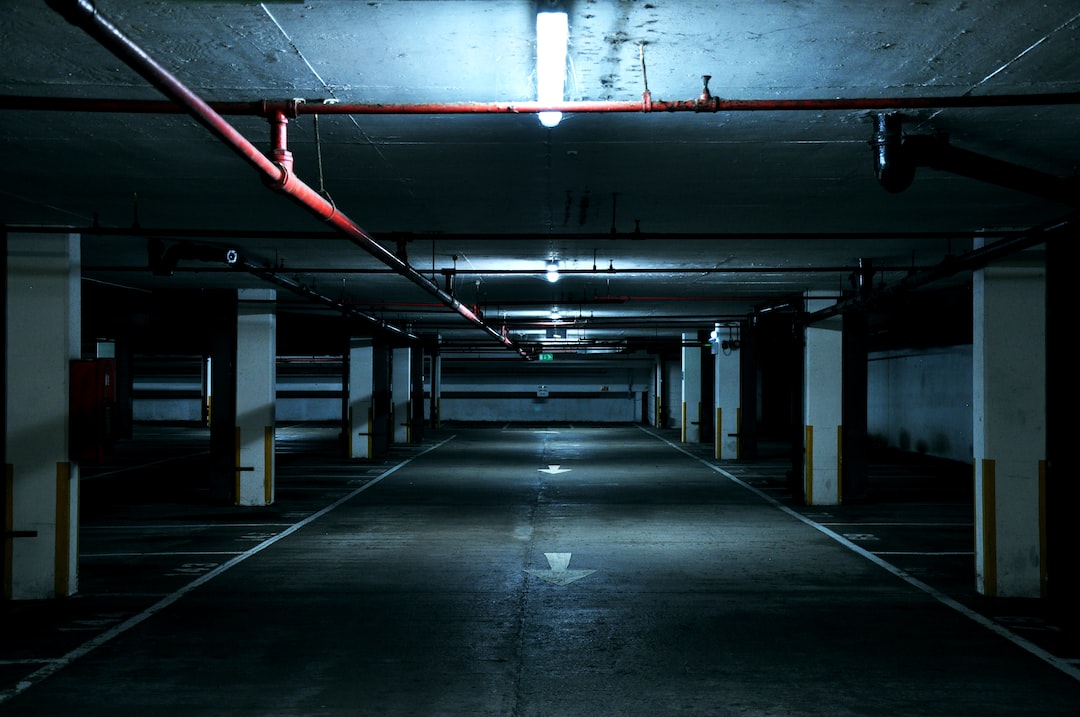 Photo by Carl Newton via Unsplash.

From the author: A freelancer gets interrupted during a job and has to deal with some aggressive competition. This is a little crime short I did for a theme of "bad guys and bad situations" which was of course a lot of fun.

Matthew stood, panting, and glanced down at the man on the floor, his doughy face bloodied from the beating. He hadn't come back to consciousness and Matthew wondered absently if he had swelling on the brain. That could happen if you hit them the wrong way. He didn't usually do that unless he didn't want noise, but this man had been lively. Oh well.

Matthew's hobby put him in front of a lot of different sorts of people; his specialisation was dealing out pain. Usually in the form of reminders for payment, be it monetary or honourable debt, but he was known for his discretion in other matters too. It didn't suit to have your face known by every Tom, Dick and Harry you might have to knock about, and having someone in reserve was useful for most of the families. Especially when his actual job was as a paramedic.

It was a useful combination; medical knowledge meant you could hurt and also patch up the grunts for a bit of extra cash. He'd known his interest in pain was wrong from a young age, he'd learned to hide it early. Being a paramedic had almost been enough, the proximity to carnage and urgency a good substitute for inflicting it himself. No one asked why you ran towards disaster when you had the blue lights flashing. But it hadn't lasted, the itch had settled under his skin and he'd needed to create. So he’d decided he would take inspiration from the best psychopaths and turn it into a skill: this way he got paid for it too. Everyone was a freelancer nowadays, why should he miss out?

His jobs had been small at first, avenging besmirched egos and shaking off stalkers or abusive ex’s. Some of them had tried to be vicious, the fighting talk in them right until they realised Matthew wasn't afraid. It always amused him, in some distant way, that abusers tried to inflict their reality on those around them. It never worked with him: he was too comfortable in his own. He knew his monster well, he didn't need to be afraid of anyone else's.  That was what got his name in front of the right people and started his employment.

Matthew had been hired for this guy as normal, at first, given a photograph and a time the guy was likely to be alone. It wasn't hard. People were alone a lot more than they really knew, and a journalist spends a long time in the office when others have gone home. So, a dark car park late at night was to be the end for him.

Matthew had researched him, carefully: Thomas Renshaw, investigative journalist, specialising in the organised crime in the city. Thomas had made some expensive enemies in his quest to get stories and Matthew was a direct result of that. But Thomas smart, was expecting him, and he’d pulled knife. That was not how Matthew liked things to go. Blood left DNA and DNA left you in trouble.

Matthew had snapped his wrist of course. Wouldn't do to have that knife be capable of any real damage. He'd thought about using the knife on Thomas in turn: he still might, he had it in his gloved hand. But it was just such a rush having a fight put up. They usually just folded, or bargained, no one had tried to stab him before.

"I'm going to need you to put that down, son," came a voice behind him. It was oddly calm for someone looking at a knife wielding young man in jogging gear stood over a bloody body.

"Son?" Matthew responded, glancing over his shoulder. An older man stood by one of the remaining cars, salt and pepper hair and wearing a grim expression. He looked well aged, like he had earned the wrinkles on his tan skin, and he held himself with authority. Ex military, Matthew pondered, or an ex cop.

"The knife I mean, I'm going to need to you to put that down," he repeated.

"I'm a paramedic, I was taking it away to minimise risk. This man looks to have severe swelling to his head and neck, this could lead to seizures. The last thing he needs is to get cut up if he's seizing." It wasn't entirely convincing. Might buy him some time.

"And which part of that paramedic training involves punching his windpipe?" asked the man with a rich laugh. His accent wasn't British, it sounded something like American. Canadian maybe? Or an American that travelled.

"Well you do have to clear blockages," Matthew laughed back, turning to look at him properly. "I do have to ask, why are you in a car park at nearly midnight?"

"Parked here instead of my hotel, their prices are astonishing. Jet lag means I'm awake anyway, so thought I would drive around. I've not called the cops yet but I'm going to, so I suggest you throw the knife away and get gone."

"Why would you do that? You've not got any ties to the man, and you're on holiday. Seems a shame to spoil it: the police take a very long time to do anything here. Plus, there are no security cameras."

"Yes there are, I walked past them," the man said, nodding to the domed protrusions set in every fifteen car spaces or so.

"Fakes." Matthew shrugged. "Too expensive to run in a dingy parking place. And no one really steals cars up here, too many people likely to steal them back."

"What an unpleasant bargain. That guy steal your car?" He nodded to Thomas.

"Colin," Matthew lied, smiling pleasantly. "I do need to start treating him though so if you have a phone on you could you call an ambulance?"

"You're going to treat him?"

"Would be a shame to let him die in a car park."

"Rather than just die?" Brett countered.

"British humour," Matthew dismissed, leaning the knife against the wheel of Thomas's car and checking his breathing. It was still there, but wet. He manipulated Thomas into the recovery position and glanced back over to Brett. He hadn't moved. "You're pretty calm for coming across a mugging victim, you ex army?"

"Used to seeing worse then I imagine, gun wounds are messy."

"You called that ambulance yet?"

"No. Since I know there are no cameras then there's no record that I'm here. There's no reason for me to get involved."

"Better to keep your hands clean?"

"Let’s say my business prefers me not to have contact with the police."

"Seems fair." Matthew nodded, turning his back blatantly. He made a show of being distracted and waited.

He was rewarded a few minutes later with a hard blow to the back of the head, his body tipping forward and bashing into the side of the car. He cried out, arms going up as Brett started to kick at his head.

"No hard feelings, son, but it pays for no one to know I was here," Brett said between the kicks. Matthew sighed: so predictable. He grabbed the knife and shifted forward, swinging it up and across the man's thighs. It hit home, slicing through the inner muscle of his right leg.

"That's your femoral artery," he told Brett as he stumbled back, a choked shout echoing in the open space, "I'd say you have about three minutes. Probably less with all that kicking, your heart rate ‘ll be up so the blood will pump quicker. They can't fix it either, I cut diagonally. Sorry about that, but I don't take well to my face being stomped on."

"Your DNA's going to be on my boot," Brett managed, frowning down at him.

"You kicked me in the face."

"You'll get caught," he exclaimed, "Why stab me just to incriminate yourself?"

"I slashed you. That is different," Matthew corrected, rolling his eyes at the sloppiness of the American, "And I am actually a paramedic, so I will be reporting this."

"Everyone's got to have a hobby, Brett," Matthew shrugged, standing slowly and wrapping the blade in Thomas's hand once more. "But you've got to have a job to pay the bills."

"You crazy asshole," Brett growled, sinking down against the car, "You can't imagine they'll believe you."

"Believe me that Thomas slashed you after you'd beaten me for trying to interrupt your fight? There's no CCTV and he's not waking up again, they'll only have my word on it. And I'm sure I'll have tried to stop your bleeding by the time they get here."

"You absolute asshole," Brett sighed, his head rolling back.

"No need for name calling, mate," Matthew said, standing and grabbing hold of the bleeding mans thigh. Brett hissed in pain but couldn't do anything more as Matthew rooted around in his pockets for a mobile. His was at home, it didn't fit in his jogging gear. He flicked Brett's open and dialled 999, waiting to be connected to the operator.

"Emergency, which service do you require?" came the cool voice of the respondent.

"I'm at the car park on 159 London Road, Bolton, fourth floor. There's two injured parties and myself. I'm a paramedic, Matthew Brown, I'm trying to administer first aid but there are no supplies here and one of the casualties is bleeding heavily, I'm concerned we might lose him."

"Alright, Matthew, we'll have someone right there. Can you stay on the phone with me?"

"No, I've got to try and control this bleeding: can you call back once we know an ETA?"

"I have some minor hits but they're not important. Just let me know when they'll be here please."

"No problem, we'll be there soon."

Matthew hung up, dropping the mobile into Brett's lap. He glanced back at Thomas and was reassured to hear the gurgling in his chest that meant his lungs were filling up. He'd be gone before the ambulance came. It was neater this way.