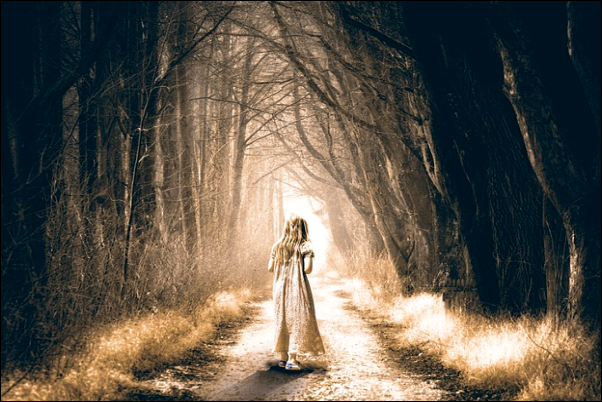 From the author: A young girl defeats an evil witch using only words. Stick and stones won't break bones, but words can save a life. Originally written for Spreading the Writer’s Word 12-25-2018 https://ninadarc.wordpress.com/2018/12/25/ladies-of-horror-flash-project-horror-author-angela-yuriko-smith-angelaysmith-sotet_angyal-loh-8/

“I shall kill you with a pen,” the small girl said. “I will pierce your soul and draw it up like ink into my quill. When you are a dry husk, I will spill what's left of you across my page.”

The old woman chewed slowly at the long stem that poked from her lips, thinking. She scratched her temple, narrowed her eyes and blew an onion scented huff from her flared nostrils. Her eyes flew open with delight.

“A story! You are writing me into a story,” she said. “Very nice! Now my turn.” The old woman rubbed her dusty hands together, her eyes sparking. Her lips peeled back from her purple gums. Only two teeth clung there, her canines, black and cracked. She gave a wheezy chuckle and leaned forward.

“I shall trap you in a labyrinth with no walls and no borders. I shall catch you in a map that no man has charted. The path will be plain and you will be free to wander it, but the end your feet find will not be of earth but of iron and shadow.”

The old woman stopped talking and watched the girl’s reaction. She had turned a shade paler than the spring moon, all the blood running to fuel her little pattering heart. She could hear it, fluttering in the cage of bone. She could smell the sweet, acrid odor of fear as it tickled along the girl’s spine and made her hair twitch at the roots. She licked her lips.

The girl was terrified, but she had a strong heart. It would taste good with wild scallions, rosemary and mint. The water had been drawn from the well hours ago to fill the large, iron kettle that simmered inside the hut. The girl had a brave face. It would be lovely to wear it and refresh her own worn out smile.

“Yes,” said the girl. “I will run through the woods but I will never find my way out. In the end, you will drop me into the large pot boiling inside your house and I will vanish into a stew and become your dinner.”

The old woman cackled with delight and clapped her hands.

“What a wonderful, quick mind! It will make a delightful pudding with coconut milk and bread crumbs. You are a sweet wonder, my child. I’m so happy you paid me a visit.”

“The forest belongs to you, so I can never escape it now that I’m caught. All paths will lead back to you and your pot. To run away is pointless, so I will just stay here and make my own point.” The girl sat in the dust, picked up a stick and began to scratch letters into the path.

The old woman didn’t know what to do. Usually her dinner ran itself ragged until it collapsed back at her house, ready to scoop up unresisting. She chewed on her bottom lip, thinking, and watched the girl. She thought and chewed so hard she drew her own blood and her rotted old tooth came free. There was a hiss of wind, like air escaping a withered balloon, and half the old woman’s vision went dark.

“Aack! What happened?” She clasped one hand over her blank eye and looked around in shock. The girl had stopped scratching in the dirt and was grinning at the old woman. She stepped aside so the woman could see what she had marked.

On the dirt, in block letters, the girl had scratched the words...

She thought and chewed so hard she drew her own blood and her rotted old tooth came free. All her power and life was caught in her two black teeth. With one gone, she was half destroyed.

The old witch couldn’t understand. Part of it was because trying to read block letters scratched on a sandy path with one eye isn’t easy. The other part was because she had never learned to read. She just blinked, unable to comprehend what magic this child could wield by scratching a stick in the dirt.

The girl turned back to her work and began scratching again. She wrote...

As the old woman stared at the girl, confused, her other tooth just fell out and she was all dead.

With another hissing whisper, the other tooth dropped out and the old woman collapsed backward on the path as dead as a frozen stone at the heart of winter.

The little girl approached the body carefully and poked it with her stick. When she was satisfied that the hag was really all gone she gave a deep sigh of relief. She held out her hands to see how badly they were shaking and then took stock of how lost she was, which was very on both accounts.

Once again she bent over the path and started carefully scratching words. This time she wrote…

Now that the old witch was dead, the forest was no longer evil and the paths became straight and easy. The girl walked down it safely all the way until she reached her home.

She stopped scratching and looked up. The forest was less dark and sinister. The twisting path that had brought her to this place had smoothed out like a well traveled road. Between the trees in the distance, the girl thought she could see her chimney. She placed her stick in her pocket and set off toward what she hoped was home.  She didn’t stop until she reached the edge of the woods and she had no more excitement, which she appreciated. When she reached the clearing of her home she carefully stepped off the path, turned around and wrote two more words…

This story originally appeared in Spreading the Writer’s Word 12-25-2018. 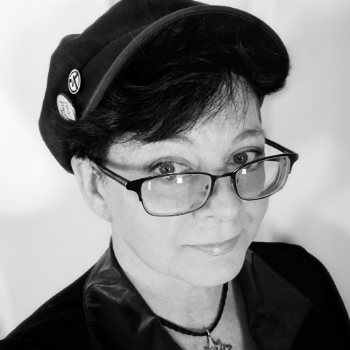