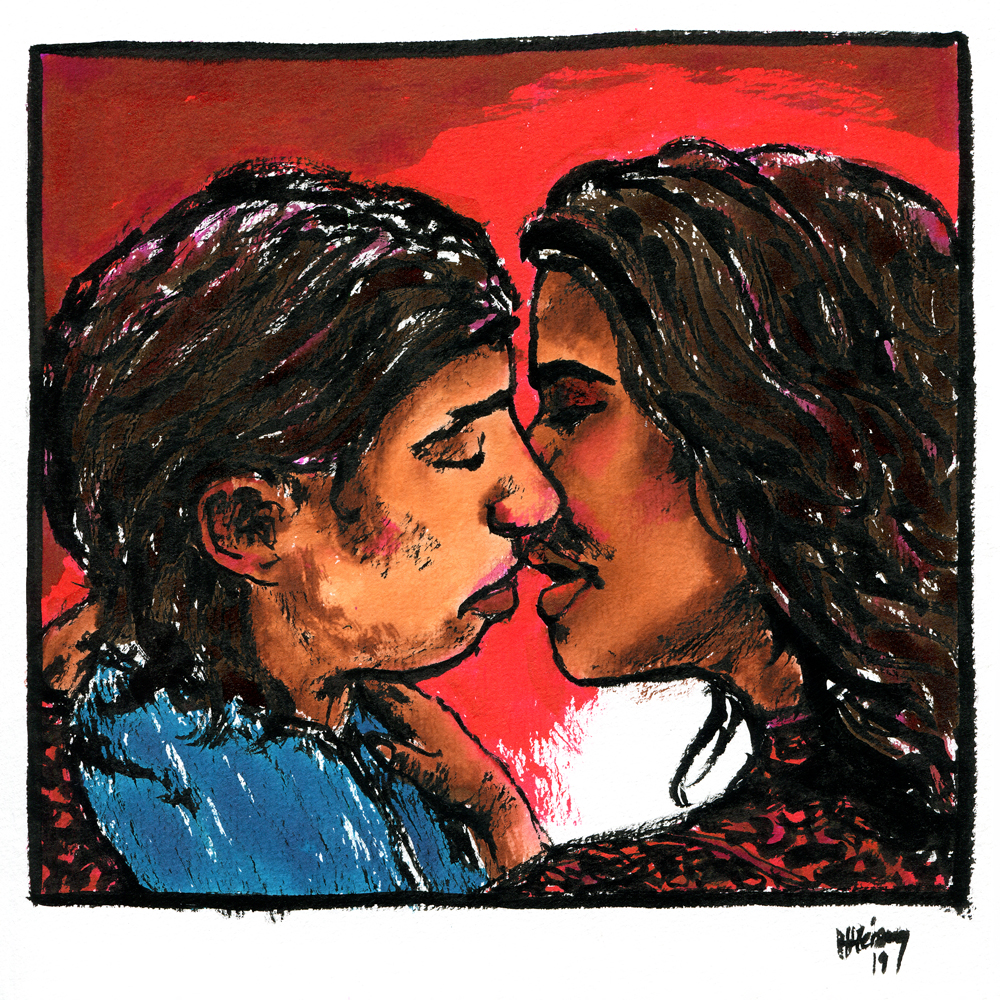 From the author: How this story came to be, where Anais and Barenin are headed next, and a bonus illustration.

And then, at long last, it was a story about someone else, a mirror, a foil, a romance. Two people who are both opposing and attracting forces, and very much alike. And desperately trying to discover who they are and their purpose in life. Because power, immortality, skill, and cunning mean little without love, do they not?

I've often found that whatever I write, my writer brain is usually a year or few ahead of my actual conscious awareness. I look back on this book (and these books, really, because I already have the next two written, they just need a deepening pass before they're ready for the world) and I can chart much of my own personal journey.

Of delving deep within my soul to understand the nuances of my own gender and gender expressions. Anais is trying to understand his gender in a world that thrust him into one role. Barenin has had thirteen thousand years to figure it out, and in some ways she/they/he has, but then there's always the admission that gender is new. Because no one remains static. You're always changing. And the expressions you'll reach will always be changing, too. Evolving to fit the person you've become.

Of discovering I'm autistic, and how deeply that played into my portrayals of both Anais and Barenin without knowing it at the time (especially Barenin, who's been around as a character and starred in my first professionally published story "An Understanding" in Escape Pod in 2014--which is on CF if you'd want to check it out!). The Aezthena, for me, became a way to wrestle with what was going on in my head: the intensity and unparity of my fears and ability to see and sense the world vs the experience of most other people I knew. The fear that I was somehow wrong. The discovery that I was not. Not less, not even more. Just different.

This book is also special to me because it was something I decided to release fully, openly, and with the ability for others to build upon, remix, and adapt as needed or desired.

There are many times I've read a book and want to hone on a single moment, pick it apart, go at it from ten different angles and understand the emotion that had maybe a single line in the book. But I rarely do that. Because I know I'd never be able to do more than post the result as fanfic (which is a valid form of fiction!), but my heart wanted more than that. I want to be able to share all my creations with a larger audience, with no caveats.

If you've ever wanted to deconstruct a book, write a tangent about a character, spin a story into a different setting, share it on your blog, record an audio version to practice your narration or promote your professional narration, turn it into illustrated poetry, translate it into Klingon, turn it into a ten-book epic--anything--guess what? You may do that with this book. And you may sell your work. If any part of it speaks to you enough to explore further, please do so. And then please share it as widely as you possibly can, your wonderful work, and make money off of it. Or not, or however you wish. (And let me know if you do! I'd love to see what you come up with and boost it as I can!)

I've released the text of this book under a Creative Commons Attribution-ShareAlike 4.0 International License (CC-BY-SA). With that license, you can freely share part or all of this book (though not the cover, which is under separate licensing), post, remix, adapt, or make any other kind of derivative work for both personal and commercial uses with only three qualifiers: that you state I'm the creator of the original work, that you list any changes you've made (if any), and that you release whatever you make in the same license so that you can continue to share the love and others can build off of your work as well.

I've also released this book in Creative Commons because I've been in places where I can't afford to buy the books that I desperately need to read--those about people like me--and they're not always available through library resources. I want as little barriers between my work and the people who want and need to read it.

I'll continue to release as much of my fiction free and in Creative Commons as possible exactly for all of the above reasons. If you've enjoyed my work and are excited by the possibilities of more free and freely remixable fiction out there, please consider supporting me through a tip or monthly subscription--every bit helps me devote more time and energy to getting these kinds of works out there. Sharing also helps!

But most importantly, thank you for reading. Thank you for the privilege of your time. Thank you for making my story come to life in your own life. Because that's what this is really all about.

The next book in this series, Bone-white Wings, is on my current writing deck with revisions. This is going slow and steady, as I'm currently dealing with a chronic illness and there are long stretches where writing needs to back-burner to health concerns. But it's another book of my heart. In many ways hitting deeper ground than the first book. It might be a bit before I'm ready to start posting, but it's very much coming. I want to fully inhabit this book and world, make sure it's alive and breathing and sparkling with its own magic before bringing it out into the world. Then, I intend to serialize it chapter by chapter, and will update more on that when I'm ready to start.

I'm an artist by trade, and art and writing bleed together for me. Writing, for me, is very much a cinematic experience. And yet, felt more often than seen in my head. I know the colors. I know the abstract strokes. But it's always something special for me when the characters form into actual color and shape. This illustration at the beginning of the post is Anais (left) and Barenin, in human-focused femme expression (right), in a scene that's not quite in this book. But it could be. And might just be in books ahead. But for that, you'll have to wait and see.

With love and thanks,