The Space Roads: Baptism of Fire 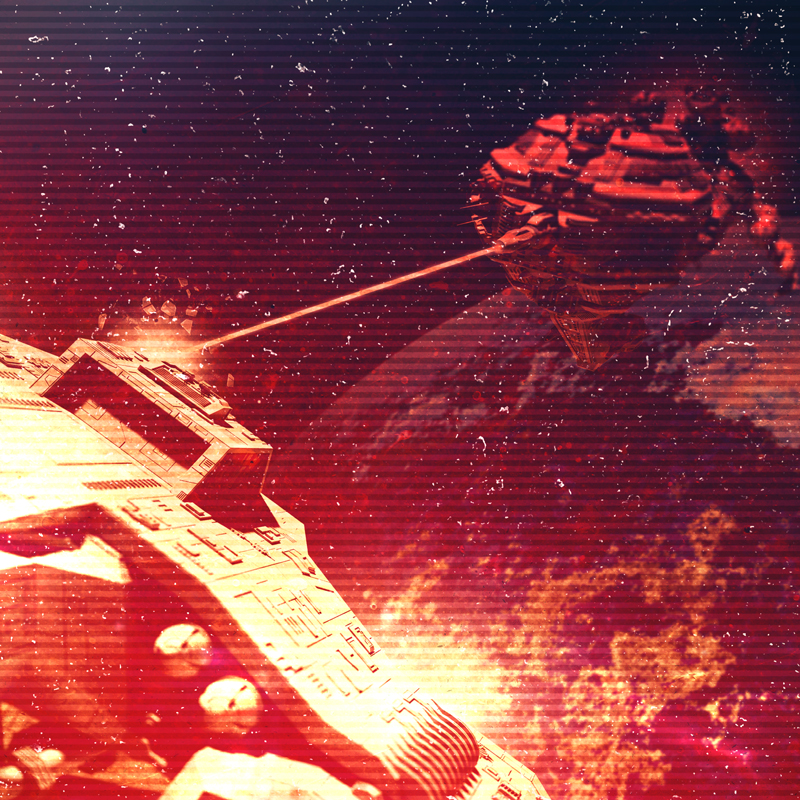 From the author: As your fleets converge, you face your brother across lines of politics and duty. One of you will survive. Or maybe both. But history will be changed.

You've always wondered why it is customary for captains to clasp their hands behind their back during battle and stand in front of their command chair instead of sitting in it. Sitting makes more sense, as the ship could buck at any time. But you understand now, as you stand with your feet planted on the textured deck of your Imperial battle cruiser, hands clasped so tightly there might be bruises tomorrow--if you live to see tomorrow.

You stand because you can't sit. Because you would vibrate out of your skin if you had to contain this much energy and nerves in one chair. If you had to face your brother, who commands the rebel faction of frigates you are fighting, sitting down.

"Moving into position for broadside, sir," your tactical officer says.

You nod, the barest movement of your head. Around you, holograms blaze and flicker with information from your ship's tactical computer: where your three cruisers are, where the enemy's five frigates are, the relative speeds and vectors of each, calculation of armaments, calculation of damage, system power and readiness. All playing out in information bursts at the painfully slow rate of lightspeed.

Newer, Home System cruisers are being fitted with the tunnel communicators that allow for instantaneous communication between ships and in-system beacons, but even if your ship was equipped with those, you still wouldn't have faster than light sensors. You'd still have to wait long seconds to see if your missiles hit the enemy. To see if your shots ended your brother's life.

You let go of your tight grip on your hands to flick one holo closer to you and zoom to make the window bigger. It shows the data on your brother's flagship, what had been an Imperial frigate, Sahara class, black and sleek and pristine. Though your ship has not yet been close enough for your cameras to record visuals at these relativistic speeds, you imagine that black hull is now pocked with brown and gray. Marks and patches from battle.

Your brother's five frigates have been harassing fleet installations and Home System freighters for months now. It was only the worst luck that your battle group was the closest to respond. Even your admiral has hesitated in sending you to do this job--not because she doesn't think you could, but because she knows what this will cost you. Because there are few in the First Empire Navy that don't have family or friends who've broken free from the Home System rule and splintered off into rebel factions.

The tragedy is, you aren't sure your brother is wrong. Home System has been clenching its fists tighter and tighter on its out-flung colony worlds. The colony world you and your brother grew up on is nearly destitute from taxes that go to build fleets in the Home System. Fleets to take war out to alien threats before they can threaten Imperial safety. But you know that safety is meant for the Home System and its wealth, not for you and your kin. And you know, too, because you've fought alien ships yourself, that not all aliens are hostile. That far too many, in fact, view humans as the threat to be stopped at all costs. And maybe they aren't wrong, too.

All of this goes through your head as you watch your ships line up for broadsides. Most of the orders have already been given. But it falls to you to give the command to fire.

"Captain, sir, we have a comm burst from one of the rebel frigates," the senior comm officer says.

You clench your jaw. "Send it direct to me." A holo pops up in front of you, curved and shaded so no one but you will see its contents. The comm piece in your ear crackles and then produces audio.

Your brother, his face haggard but set, stares back at you. You are only two years apart. As children, you were inseparable.

"I know what you think you have to do," your brother says. "What your orders say. But there's another choice. Join us. Please. You know what the Empire is doing is wrong, taxing the colonies to death, refusing food and aid. We must break away from them. We have to find peace with the other species around us, or we'll destroy ourselves. Please, you know I'm right. I have signed documents in hand from both the Ete-kepattet and Jish--they don't want to fight humans. They'll bring aid to our colonies that need it. They're willing to ally with us against the Empire."

Your brother hesitates, looking you right in the eyes. You know this is a recording. You can't speak ship to ship--there are too many firewalls in place, because the rebels have tried to take over ships through hacking the main systems before. And there's the time lag. Always the time lag. But you can't help but feel he's speaking directly to you. Seeing you now. Watching your face react--or not react, as it is--to his information. His plea.

"Please," he says finally, his voice cracking. "Please. Do what is right."

And you might live, but maybe you, too, will be lost. Lost because you know he is right. Because you've seen what the Empire's been doing to its citizens on the fringe, and to aliens who have no wish to fight. Because you know the Empire cares only for wealth and expansion of its borders. You know the Empire's xenophobic policies and propaganda are wrong. You know this. And you've known it for some time. You've just been afraid to do anything about it.

Forty-five seconds until your ships reach optimal broadside range. You need to give the firing command before then--the sequence is already in the ship's computers, as the firing window is too small for a human to make that judgement on their own. The other two captains on the other two ships under your command will surely have given the command to set the firing sequence in motion by now.

You look around your bridge. It's a large bridge in the older style, which favored a large pool of data from various personnel over a tighter command structure. There are thirty-two people on your bridge. And three hundred and nine souls on your ship depending on you to make the decisions that will keep them alive.

"Captain?" your tactical officer says. He looks over at you, his eyes hard. He knows who commands the enemy fleet, and knows the enemy's relation to you. He knows what must be going through you mind right now.

"Captain," your tactical officer says again. And there's something else in his voice this time. A resolve, not a question.

Your eyes meet. He knows what you want to do, and he's not going to stop you.

You look around at your senior officers, meeting their gazes. The bridge goes eerily silent, only the soft blips of system functions echoing in the still.

Fifteen seconds until you can't give the command.

"Stand down," you say. The words are sharp, a knife through the air. Several people flinch.

But your crew is loyal. They turn to their stations and put that command in motion. Your ship's weapons systems go to standby.

And with that, you begin to regain some of your confidence, your vigor. You clasp your hands back behind you. "All power to shields. Ship comm: all hands, take hold, take hold!"

You follow your own advice and return, finally to your chair.

Your brother's ships will still fire on yours. There's no way to maneuver your ship at this speed or tell them in time--their computers are already set. Your brother doesn't know you won't fire. And the ships with you will still surely fire. But with only two cruisers firing instead of three, the chances that your brother will survive are much greater. And with your shields up, instead of power diverted to weapons, the chances you will survive are greater, too.

There's a chance both of you will live to fight another day. And to fight that day together.

You understand why a captain usually stands during a battle, but you sit now, body tense but resolved to see this through. You've made your choice, and you know it is the right one.

You stare straight ahead at your holos as your ship enters a baptism of fire.