Mary Anne made this story available for free. Say thanks by sending them a tip.    Send Tip

From the author: Five bucks for answering the question; fifty for the long form ...

So this guy walks up to me on the street, at something like
p.m., on that deserted stretch over by the park, y’know? I’d be scared,
except he’s just a kid, and he says, “Hey, you wanna do this survey?” And
I say, “What’s in it for me? I’m a busy woman?” And he says “Five bucks
— and if you answer the long form, fifty.”

“Do you gotta know my name?” I ask him. He says, “Well, we have
to put down a name, and an age, but you don’t have to give me your real
name. They won’t know.” And I think it over, and finally, I think,
‘Sure. What the fuck. Give the kid a thrill.’

“Put me down as Esmerelda. Esmerelda Valentino, age
twenty-eight.” Ever since I watched “I Dream of Jeannie” as a kid, I’ve
liked the name Esmerelda. “And the answer to your question is ‘Yes’.”
The kid scribbles something down on the clipboard he’s holding, and then
reaches into his pocket and hands me a five. And I say, “Where’s my
fifty?” And he says, “That’s only for the only for the long form, Miz
Esmerelda. Nobody wants to answer the long form.” And I say, “Show
me.”

I hand back the board. “That’s what they want to know? They got
this list — that’s supposed to tell them how we do it?” The kid nods his
head, looking embarrassed. And I laugh. ‘Cause it is just too damn
funny, y’know? And I say, “Siddown, kid. Grab a patch of sidewalk. That
little list of yours won’t tell you nothin’. I’ll tell you how I really
do it.” So we sit down on the sidewalk, and I stretch out my aching feet,
’cause it’d been a hard day at the diner, and I close my eyes and start
talking.

“It all starts with Johnny, see. Not Johnny Stepanino, that lousy
no-good bum that I’ve been seeing for the past six years, who keeps
promising me a ring, but do you see it on my finger? Not him — he’s got
stringy hair and doesn’t remember to bathe half the time unless his momma
tells him to; I wouldn’t give him the time of day ‘cept he’s got a good
business and could really take care of me and my kids. But he’s never
gonna get up the nerve, ’cause his momma don’t like the idea of him
marrying a girl who’s only a little bit Italian, mostly mutt, and in any
case dropped out of high school when she got knocked up at sixteen. His
mama don’t like that idea at all.

“Anyway, the one I’m thinking of is Johnny Viaggi. Johnny Viaggi
with the long black hair, that falls into his face so cute — kinda like
yours, kid. He smells clean, all the time; clean as spring, with the
smell of new bread hanging heavy over him — that’s ’cause he works in the
Cantalini’s bakery over on Fourth.

“That Nina Cantalini! How that little shit managed to snag Johnny
Viaggi I’ll never know — oh, she’s all right looking, I’ll give you that,
with that tight ass, and those big tits. But them Cantalini women are all
drinkers, which is why the men run the shop, and I swear that before she’s
thirty that Nina will be drinking up the profits and lettin’ her body go
to hell. She’s gonna swell up like a balloon and those big tits are gonna
droop over the big beer belly she’s gonna have. And that tight ass is
gonna loosen right up, and Johnny Viaggi is gonna be damn sorry he married
such a worthless drunken lump of a woman when he could’ve had me.

“You’re wondering why I’m telling you all this. See, when I’m
getting off, I’m not alone. No, I close my eyes, and Johnny Viaggi is
right there next to me. It’s his big thick hands that lift me up and move
me to my bed, his hands that unbutton my blouse and push it down my
shoulders and off my arms. Slender arms, and a slender body, and if my
tits aren’t as big as that damn Nina’s at least they’ll still be standing
up straight in ten years. I don’t fucking care if I’m only a 32A — my
nipples are sensitive as hell, and that’s what counts. That’s what
Stepanino says, anyway, and for once the scumbag is right.

“I’ve got great little tits, and when I unhook the front of my
cherry red bra and pull it off, that’s Johnny’s fingers doing it, and his
big hands cupping my tits so that they disappear under his warm, rough
touch. Then my nipples stand up hard, so hard they poke out between his
fingers, and he starts playing with them, rolling them between two
fingers, squeezing and pulling a bit, all the while whispering words of
love, ‘mi amore, cara mia, darling Angie’. And I’m moaning under Johnny’s
touch, ’cause it is so good, and my nipples are so sensitive, and his
breath is soft against my ear, against my neck — I’m almost ready to come
right there, but he likes to take it slow.

“Then his hands slide down my body, unzipping my skirt and pushing
it down, so he can see the red silk garter belt and black stockings I wore
just for him, just like he asked me to. No panties, and Johnny’s fingers
trail down and down, almost tickling but not quite, sliding over my shaved
pussy, until they’re barely touching my clit. And he touches me then, and
it is so sweet, so fucking sweet that I moan Johnny’s name, oh yeah. I’m
lying in my bed with his body warm beside me and his mouth on my nipple
now and his fingers sliding into my pussy, warm and wet and slick and
hard, pumping harder and harder until I’m almost about to come and it’s
then, then that he whispers, ‘Angie, will you marry me?’ and that’s when I
scream ‘Yes, yes, yes!’ and I’m coming hard and fast like you wouldn’t
believe.

“That’s how I masturbate. You got all that down, kid?” He’s
staring at me with wide eyes, like he’d never heard a woman come before.
Maybe he hasn’t. And I’m standing up and shaking the dust from my ass,
and he comes alive quick and reaches into his pocket, fumbling a little,
and then counts out nine more fives into my hand. He’s still not saying a
word, so I smile at him and turn away, walking down the empty street and
not caring that my feet still hurt ’cause I’ve got fifty dollars in my
pocket and a sopping wet pussy.

Mary Anne made this story available for free. Say thanks by sending them a tip.    Send Tip 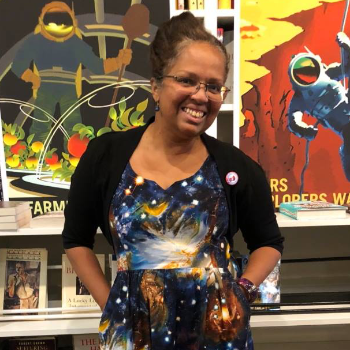