From the author: This was a short horror story originally published at Daily Science Fiction. It was a finalist for the Best Short Story in the 2014 Australian Shadows Awards.

by Alan Baxter
"I need a volunteer!" Mephisto scanned the crowd, one hand shielding his eyes as if from a bright sun. His red-lined black cape whipped around as he strode from one side of the stage to the other.
Dozens of hands shot up, clamoring to be chosen. Mephisto squinted, heart hammering. He so hated this bit, but had little choice. There's always a choice, a voice whispered in the back of his mind, and he squashed it away into its dark corner.
His gaze fell upon a young boy, maybe eleven or twelve, smiling in anticipation. His hand wasn't raised, and of course, that made him perfect. Mephisto singled him out, one long finger bright in the spotlights. "What about you, lad?"
The boy's eyes widened and he looked left and right. One trembling hand rose, pointed to his own skinny chest.
"Yes, you. Come on, I'll make you famous!"
The boy's parents sat on either side of him nodding enthusiastically. Cajoling from the crowd drove the boy from his seat, up darkened steps and past voluminous crimson velvet curtains. Brass half-shells along the stage front cupped incandescent bulbs. Mephisto grinned over the brightness at the audience as they encouraged the boy along.
When the young man reached him, Mephisto laid an arm across bony shoulders. "What's your name, lad?"
"Matthew."
Mephisto turned back to the crowd. "Matthew, ladies and gentlemen!"
Whoops and wild applause disgusted the magician, these easily entertained masses. To hide his grimace he made a theatrical turn, swept Matthew along to a tall black wooden box at center stage. It had a double door, split top and bottom like a stable, with bright silver tape marking edges that sparkled in the spotlight. The crowd oohed. Mephisto pulled open the two half doors. The box was empty. The crowd ahhed.
How he hated them.
Matthew looked terrified, pinned by the beam of light from the gallery. Mephisto couldn't blame him. "Please, step inside."
"What are you going to do?"
"I told you, I'm going to make you famous!"
The boy nervously moved forward and turned around, looked out over a sea of expectant faces partially obscured by the glowing coronas before them. Mephisto closed the bottom door. Only Matthew's head and shoulders showed over it. "You've seen me perform all kinds of magic this evening, ladies and gentlemen," the magician called out. "You've been impressed, yes?"
The crowd whooped and hollered.
Mephisto lowered his voice, forced the crowd to be silent to hear. "But do you believe I can make a young boy disappear?"
The crowd assured him they could. Of course they did, they were in the palm of his hand.
He winked at Matthew, closed the top half of the door. The boy's frightened questions came through the wood but he ignored them.
Mephisto addressed the crowd again. "Clap for me, folks, slow and steady, like this." He set a measured, rhythmic applause going. As the audience carried it he raised his hands high. The energy from this roomful of sheep was powerful, but that was ever the case. Never underestimate the malleable vigor of people in large numbers. Their desperate need for entertainment, to muffle, however briefly, mundane lives. He let that energy rush through him, absorbed it, mutated it. He spoke the words.
A low roar, like distant water powering through a canyon, rose in the auditorium. It built up, rising with the frenzied clapping of the audience. They felt it more than heard it, clapped faster and faster, began to cheer and laugh and bay. Mephisto drew that power in and the roar rose to a deafening crescendo. Sparks and flames burst out around the box and quickly vanished. The box stood dark and still, the crowd gasped and faltered, the noise sank away like a tide until silence rang in the theater.
Mephisto slowly lowered his arms and a grin spread across his face. He turned and threw open the doors. Young Matthew was nowhere to be seen. The crowd erupted in applause and laughter. Mephisto strode to the front of the stage and bowed once, twice, thrice. With a sweep of his cape he turned and walked swiftly into the darkened wings. The last thing he saw was the nervous smiles on the faces of Matthew's parents, the empty chair between them.
He packed quickly in his dressing room while the crowd's approval sounded slightly muted through the walls. He stuffed his magician's garb into his hard leather case and put on the shabby suit and scuffed shoes that disguised him with their normalcy. He pulled off the dark hairpiece and ran one hand over stubbly blond hair. It only took a moment to wipe away thick makeup, revealing pocked and pale skin. In just a couple of minutes he was done, grabbed his case, and left by the stage door, into a grimy alley.
A dark shadow, vaguely man-shaped, awaited him. Beside the shadow a smaller presence trembled, emanating terror.
"Thank you, George," the shadow said. "Mephisto, really?"
George shrugged. "As good as any. I'm running out of names. It's fitting, isn't it?"
The shadow laughed, a terrible sound. "Same time next year, George."
The magician scowled, pushed past the darkness, wincing at its icy presence. "Yes, yes."
"What's it been now, two hundred and twelve years?" the shadow called after him.
George turned, his face angry and pained. "Two hundred and thirteen. Don't play games with me."
That deep, ominous chuckle again. "Any time you want it to end, just come to me. I'll be happy to have you."
The shadow winked out with a burst of frost before George could reply. He ground his teeth, hating himself, hating people, hating everything, and scurried from the alley. As he turned down the street away from the theater he heard a woman's voice inside, high-pitched in anguish, screaming for someone to do something. He hunched into himself and made for the train station.
The End 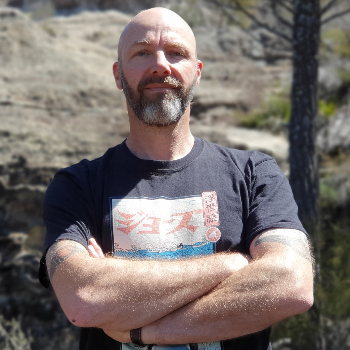