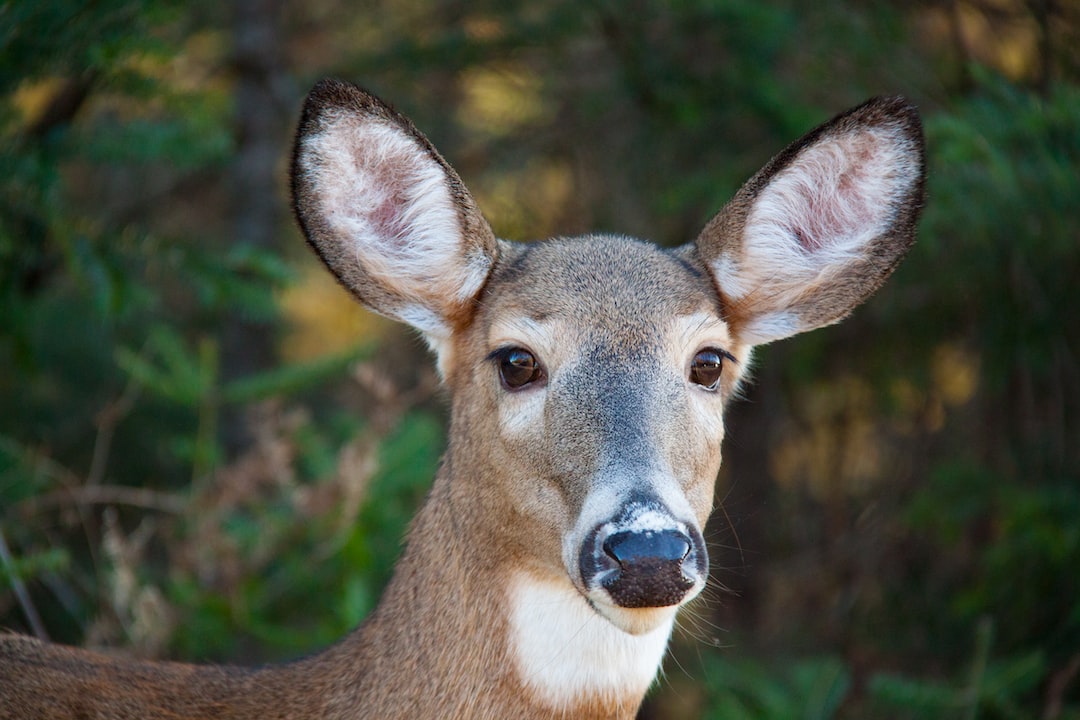 Photo by Jérémie Gaudry via Unsplash.

From the author: The doe Faeldra merely desires a mate, but she has a much greater role to play in the forest as one season becomes another.

He smelled of male-musk and clover.

Faeldra's nostrils quivered, and the doe stretched her neck out, straining to catch every nuance of the scent.  The stag was far away yet, but he would find her.  The time was near for both of them.

She stepped carefully through the forest, rustling as few leaves as possible--a difficult task, now that the trees were shedding them so fast and thick.  The air tasted sharp as salt, and the bite of the wind made her glad she'd already cast off her red summer coat for the thicker gray-brown of autumn.  Afternoon light fell in slants of gold and bronze, turning the stream where she paused to drink into a glittering rush of sun.

The trail she followed was an old one, a path she had known since she was a newborn toddling after her mother.  It was the same trail, she thought now, that her own fawns would walk behind her.

Her thirst slaked, she raised her head to sniff the wind again.  Yes, he was close now.  Her hide twitched as if flies swarmed around her, but the restlessness was in her blood.

She moved deeper into the forest, where the trees were so tall and full that even without leaves, their entwined branches shut out the sky.  The clearing she paused in was dim as dusk and tangled with gnarled roots, and the trees that ringed the clearing bore coats of damp moss on their trunks.  Birds sang somewhere above her, but she saw none, and the air felt thick, as if fog hung unseen around her.

Then she saw him.

She stamped once; she could not help it.  Her legs tensed beneath her, and she fought the urge to bolt.

He was standing in the center of the clearing, as if waiting for her, and his perfection stunned her to staring.  His antlers branched endlessly to points as bright and numerous as the stars.  His chest was broad, his legs were graceful and strong, and his scent was as rich as forest-loam after rain.

She took a step forward.  Somehow it was right that he stand and wait, right that she go to him.  She had seen a flock of birds winging its way south that morning, each one guided by something powerful and unseen.  She understood that feeling now.

He bowed his head to her as she approached.

She felt she must say something, though she feared her voice might be more the bleating of a new fawn than any real speech.  "My lord," she said at last, nodding to him.

She did not realize she had closed her eyes until she felt his breath, spring-warm and sweet, on her forehead, then along the back of her neck.  She pressed her nose into the breadth of his chest.

"What do they call you?" he asked.  His voice was low as thunder, and she trembled.

She looked, and saw--thought she saw--

She shook her head and looked again, but it was the same.  She saw, now, the deep green moss that mingled with his coat.  She saw antlers that bore buds breaking into white blossoms, and eyes that glimmered like the smooth stones in the stream.  And when she gasped, the ears that swiveled to catch the sound were summer leaves, veined and flushed with gold-green light.

The clearing was silent but for her breath, and then he spoke again.

Faeldra closed her eyes once more.  This place was strange, and so was he, and yet she did not sense danger in either.  She could feel sunlight warm on her back, even though none could break through the canopy.  She could hear more than she had ever heard--the scrape of a mouse's tail across a leaf, the rustle and flap of a goldfinch taking flight, the tickling patter of ants crossing a crumbling log.  She could feel the very sap moving through the secret hearts of the trees.  She heard her own heartbeat, rapid and faint, and then she heard his, infinitely slower, steady, calming.

She felt her heartbeat slow to match his, and she opened her eyes.  Whatever he was, there was no doubt what he wanted, and whatever he was, she wanted it, too.

She closed the space between them and kissed his throat.  He lowered his mouth to hers.

The first pains struck her just before dawn, as she was stretching to break off another piece of bark.  She had given up trying to paw through the crusted snow; the ice cut her, and there was nothing left that was worth the effort.  At first, the pains were no different than the bite of the wind or the aches in her legs, but then she recognized them and sought what little shelter she could find.  Some part of her whispered that it was too early, too soon for a wet-coated fawn to stumble into a frozen world, but the pain pushed that thought away, and for a long time there was nothing else.

Time passed, and in time a new thought came.  The fawn might be dead.  When had she last felt it move?  She knew such things happened.  And if it was dead, perhaps it was better.  Better to die in the warmth of her body than freeze in the snow.

No.  She closed her eyes, searching through the pain.  For an instant, her senses widened as they had in the clearing, and she heard the fawn's heartbeat, swift and strong, as if its hooves already skimmed the earth.  Her own heart leapt in response, and she pushed hard when the next pains came.  It took time--she had no sense of how long--but though she was weak and shivering, at last she felt the fawn slip from her.

She turned to see, and joy flooded her.  He was alive, he was strong, he was beautiful.  She washed the blood and birth-water from him, drinking in his scent: the scent of warm earth and clover, the scent that was hers and the stag's, and the scent that was the fawn's alone.  And she wept as she bathed him, because at last, she understood.  She had borne him, but he was not hers to keep.

The day's first light fell through the trees.  She raised her head, knowing the stag would be there, and he was, his expression proud but solemn.

"Look upon me," he said, and she did, though she did not want to see.

His antlers were bare and flaking, and the moss on his coat had dried to gray.  He raised one front hoof, then set it down, and amid the skittering sound of dead leaves she saw a flash of white bone.  He smelled now only of dampness and rot.

The fawn struggled to its feet.  As it neared the stag, its wobbling steps became sure, and it leapt the last distance to stand with him.

The air warmed around them.  Faeldra could hear the snowmelt trickling down into the streams, the buds swelling to bursting on the trees, the first blades of new grass pushing up through the earth.

The stag nodded to her, and at last, she nodded a reply.

So it was; so it must be.  It was the oldest trail of all.

The stag disappeared into the forest, and spring followed behind him.