I called them the Knocking Men

From the author: You’ll probably wonder why I ever thought any of this was normal. But you have to understand, you can get used to practically anything, with enough practice.

I’ve seen the Knocking Men since the spring I turned eight years old. Their pale, spindly hands pressed against my window at night, knuckles protruding like the joints of an insect’s leg, rattling against the glass. I would scream for my mother every night, but she would look straight into their cavernous eyes and tell me that there was nothing to be afraid of. She’d sit on the edge of my bed and trail her fingers through my hair, smelling of the cigarettes she snuck late at night, whispering in my ear to go back to sleep.

I kept the curtains tightly shut, but I began to spot them during the day in doorways and windows, hedges and park benches. I could always identify them by the length of their fingers and the soot on their lips. I took polaroids that exposed nothing but my own reflection; I presented crayon drawings to my father’s furrowed brow.

But after I overheard my parents’ hushed late-night “she needs a doctor” and “it’s just an overactive imagination” and “it’s not normal,” I stopped speaking of the Knocking Men.

On the first muggy night that summer, when the air congealed in your lungs like swamp water, my father insisted on leaving my bedroom window open to let in the nonexistent breeze. After lying still as a corpse for long minutes, I crept from my bed, crossed the floor and kneeled next to the window, my back against the wall.

My heart vibrated in my chest, and my warm, sticky palms pressed against the wall. My lips were cracked, but I hissed “what do you want?” with as much bravado as I could.

After a stretch of silence, long fingers trailed into the open window like a nose following a scent, nails as sharp and jagged as the shark’s teeth I’d seen at the aquarium.

I leapt to my feet, darting forward to slam the window shut, but quick as spiders, those fingers skittered back the way they’d come.

I spent the rest of the night sweating under my blankets. I didn’t try to speak to them again.

As I grew older, the Knocking Men came less and less often, or maybe I’d become blind to them, stupidly let them blend into my own personal scenery. I avoided their blank stares, their knuckles rattling against my windowpane.

One day, I even brought a friend home. Annika and I sat on my bedroom floor, cutting up magazines into overwrought poetry to tape to our school notebooks. The window stood open, the warm breeze ruffling scraps of paper strewn across the faded blue carpet.

I shifted to sprawl on my stomach across the floor, one foot meandering through the air. I stared at a page full of adjectives and bit my pen. I told Annika I couldn’t choose between “soulful” and “poignant.”

Annika didn’t look up from her work with her scissors. “Definitely ‘poignant,’” she said. “I mean, silent ‘g’ and everything.”

I looked up, and my warm bubble of normalcy popped. A tall, narrow figure stood behind Annika, one long finger crooked under a lock of her hair.

I dropped the magazine, and lunged toward him. “No! Get out of here!” He stared at me in silence, Annika’s hair in hand. I shoved him back with both palms. As substantial as a bundle of twigs, he drifted backward beneath my palms, but swayed forward again just as easily.

He looked from my face to my hands, and his lipless mouth split in a smile, revealing teeth like cinders and a mouth full of flame. I followed his gaze. My own fingers had grown long and spider-like, the nails turned to jagged razors. I stumbled backward, whipping my hands behind my back.

“Sofia, what the hell?” Annika’s eyes were wide on mine, and her lock of hair lay severed on the floor. I tried to answer, but my mouth tasted like ash, and speaking seemed hopelessly alien to me.

Annika scrambled to her feet and bolted from the room, clattering down the stairs and out the front door while I stood frozen in place. The Knocking Man disappeared as silently as he’d come, and I stood alone in a sea of magazine clippings and scattered books.

Before my eyes, my nails began to recede, and my tongue slowly unstuck from the roof of my mouth. I detached my feet from the floor, and stumbled on stiff legs down the stairs and into the kitchen. My mother stood cutting onions, her blade flashing with every movement in the overhead fluorescent lights.

“Mom! Something’s wrong -- there was a man. Like I always said. Look!” I held my hands out to her, nearly normal now, but the nails still unmistakably ragged and cutting.

“Oh, Sofia.” My mother’s hand squeezed my shoulder, the tips of her nails forming sharp points, even through my sweater. She smiled, and her teeth glittered. “Finally, you’re growing into your… legacy.”

Her breath crossed my face as she leaned in closer, and a whisper of smoke tickled my nose. “It’s time to introduce you to your uncles,” she told me in hushed tones.

The taste of ash filled my mouth. 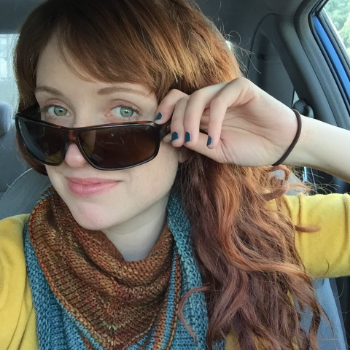