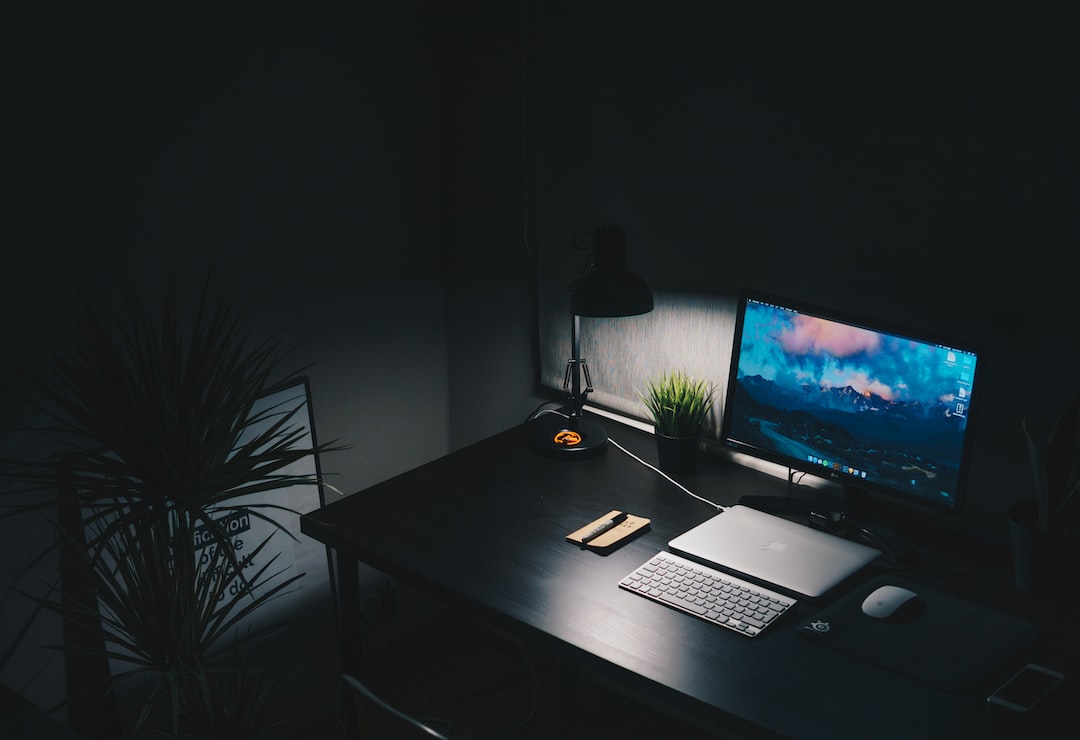 Photo by Nikita Kachanovsky via Unsplash.

From the author: Mildred's fantasy life made her temp gig more interesting, but now it was taking on a life of its very own...

It was on the afternoon of the fifth day that Mildred first noticed it, though the day was like any other until then. She signed in at the front desk, wandered down the brown on brown on brown halls--carpet, walls and columns all in different shades, of course--and walked to her cubicle with its gray metal desk, set off by maroon dividers from all of the other cubicles with their metal desks.

She sat down before the computer enthroned in the midst of the gray plain and turned it on. Then she watched the spiraling documents scroll past, adding numbers, changing numbers, waiting, hoping for the new office manager to notice her. He had the handsome, craggy features and the fierce disposition of the hero in Love's Tender Mauling, or whatever that romance that she picked up at the drugstore was called. Watching his strong hands, sans wedding band, glide over a keyboard never failed to make a cool shiver creep up her spine.

In fact, she spent so much time watching his hands that she seldom watched her own. Not that it mattered. She could do this job with her eyes closed, and frequently did. What set this job apart from the others was that she didn't notice the changes until the fifth day because she was distracted.

Things had gone as they usually went. Her co-workers greeted her when she arrived, then ignored her. They were, after all, permanent, the weight of their benefits and responsibilities giving them a substance that she knew she lacked. Not intrinsically, of course, but rather in the sense of having a denser way of viewing the world. That need to work overtime to meet deadlines. The financial burdens of mortgage, children, unemployed relatives, the press of the job market. All these things separated her from them, the grasshopper from the working ants.

Then, too, the office environment itself conspired to make her discovery more difficult. Fluorescent track lights flickered over flickering computer screens, causing the barren off-white walls of the data entry room to gleam sullenly. The nubbly river of dirty carpet snaked along to disappear under black and pink and beige low and high-heeled pairs of pumps, carefully tucked under each CompatibleBack™ chair. The few windows were visible only on route to the bathrooms and the lunchroom where Mildred went her solitary way each day. She seldom eyed the stunning vista of parking lot that they exposed, concentrating as she was on getting to the microwave before anyone else. Not, in short, an atmosphere calculated to encourage self-awareness.

Even so, Mildred did notice eventually. She was typing away when she had a sudden urge to take her hands from the keyboard and stretch them. Her left hand, with its well manicured nails coated in pink pearlescent polish, seemed to fade, grim institutional carpeting visible through it for a moment. She blinked, shaking her mousy brown head with its fashionable bob to clear her eyes. She hadn't just seen that happen. That was all there was to it. When she looked at her hand again, she couldn't see the carpet anymore. It still looked a bit translucent, though. More iron, she decided. That would fix her right up.

She went back to typing and longing. Nothing untoward occurred until she was on her way back from the lunchroom after spending a solitary, but pleasant lunch reading Grasp Me Tender (she paid no attention to the titles of these books anyway). The office manager had returned early and was gazing earnestly at his monitor. She fluttered her eyelashes as she walked past and greeted him, but she couldn't help but notice that when he glanced up, he seemed to see right through her.

Ah well, she thought. Story of my life. The good-looking ones are all unavailable or disinterested for whatever reason, not like in the books. In those stories, she would have been Mildred the governess, or Mildred the paid companion, the quiet and unassuming, yet alluring heroine who draws our hero's grim, dark gaze. He would have treated her cruelly (not unlike the office manager, she reflected), until his true feelings for her overcame him. Together they would solve the mystery of what had happened to his supposedly deceased wife or to Mad Old Uncle Charlie. Then they would get married and go on to happily raise the children from his first marriage along with their own. Then, well...did you have to go on living in those old manor houses, she wondered. They sounded so uncomfortable, cold and dank and filled with deceased or crazed relatives.

That was when it happened again. A glance downward showed the outline of gray carpet where her right foot should have been, sheathed in its regulation black pump. I will not panic, she thought. It's just work related stress. That's it. I've just stared at the screen for too long. She closed her eyes, then reopened them slowly. Her foot was back, or most of it anyway.

She took a deep breath and tried to concentrate on the screen again. She had heard of spontaneous combustion, but never spontaneous erasure. If she hadn't heard of it, then it probably wasn't happening, she thought hopefully. Peering covertly around indicated that her coworkers seemed oblivious to her condition as they continued typing away, making surreptitious personal phone calls, and staring at their own maroon walls.

But then they always seemed like that to her. Like worker bees in a great hive while she flitted along on the outside. She had always liked to think of herself as a free spirit. That must be why she could almost see through her right leg now. Those ethereal qualities, kept buried too long, were bubbling up to the surface. Still, she was worried.

She wondered if any of the romantic heroines, the governesses, companions, former nuns and so forth ever vanished into thin air. She was fairly sure that they didn't; after all, how could Prince Charming find you if he couldn't see you? This would just have to stop. She exerted herself to concentrate on making her feet visible once more. There was her future to think of.

At that same time, she noticed that it didn't hurt or even feel uncomfortable. She could still feel her leg when she put her hand on it. It just seemed, well, less present than it had before. She pondered her options.

When she stopped to think about it, it occurred to her that invisibility could come in handy. At most temp jobs, no one would know the difference anyway, at least not if she learned to control it. She imagined her invisible hand pinching the office manager's cute, gym-toned butt. When she smiled, she noticed her leg came back, but only for a few moments. Then it began again.

It was a slow and steady process inching gradually up into her lap. She wondered what, if anything, she should do about it. Drawing the office manager's attention to her vanishing corporeality didn't seem particularly useful. Could a hospital treat a vanishing patient? She watched her legs as though hypnotized. She tried smiling again to see if that would work. It didn't.

She could still see her outline glowing against the carpet. What would happen if it disappeared? Would she see that white light dying people always talked about on television? Why her anyway? She had never thought of herself as someone who had mystical experiences. Or even interesting ones, most of the time.

She tried to imagine the headline on The Star: "Temp dissolves at computer." But, no, "temp" sounded too undignified. "Data entry technician," now that was better. But would it even be in the tabloid headlines? Maybe she should yell, "I see Elvis!" Seeing Elvis, then vanishing would surely give her a moment of fame. After all, what was the point of disappearing if you couldn't be famous for it?

The process had gone on without her, continuing gradually up her torso. She raised the glowing outline of her hand, now all that she could see of herself, and touched the monitor. She thought that it would show her something, though she wasn't sure exactly what. Her hand passed through the screen and into the components beyond, and she felt a sense of flowing energy, almost like a shock. She made a decision.

Lack of a physical body was bound to get her fired anyway, so she dragged her hand from the computer and stood, kicking her pumps off. She had never really liked them, even though they had been on sale. In fact, none of her clothes felt right. It was time to get rid of them. She slipped off the sensible tan suit jacket and skirt. Her plain gold earrings and watch, the blouse with the ruffles that seemed so feminine when she bought it, the lacy underwear, all went one right after the other. She was fairly certain that anyone watching would have only seen a glowing outline, nothing distinct. Glancing at the pile of clothes, it made her smile to see that they had become clearly visible once again. That would wake them up.

She stretched, feeling light and powerful. What to do next? She walked in that slow, sensuous way, hips swinging from side to side, that she always attributed to movie stars, toward the unsuspecting office manager. She ran her fingers through his curly black locks, but he only glanced up at the air conditioning vent in annoyance.

Perhaps she wouldn't try to bring him with her after all. She had only toyed with the idea for a few moments, anyway; he was awfully peevish. She had a moment of uncertainty about what to do next, then it struck her.

She pushed past him and put both hands inside his monitor, then her arms. Feeling reckless in the glowing rush of the circuitry, she dove in, the office manager now only a vague regret. There was a shout of "Dammit! We've lost another one. Have the agency send someone out."

Then, Mildred was flying on lines of information, crackling connections, electrical current. She flowed along, wondering if others had gone there before her.

All this was hers now.

This was her last human conscious thought. It ebbed out into the computer's memory and appeared on each monitor in the office as she melded into the LAN, causing the office manager to curse loudly about computer viruses.

Mildred moved on, becoming less Mildred all the time. Sparks flew from the monitors as she explored the LAN, spelling her name on each in a different font, just for the fun of it. Frightened permanents buzzed away from their monitors in trepidation, fully aware of Mildred for the first time that week, as with a final spark, the last of her surged joyously out onto the Net.

This story originally appeared in XOddity.