Cath made this story available for free. Say thanks by sending them a tip.    Send Tip

A heavy soldier's boot thudded against the cottage door. Mother Mabel, on her knees in front of the fireplace, craned her neck to see the wooden door burst open, rebound off the stone wall, and bounce close again. She caught glimpse of a broad soldier wearing smudgy, tarnished armor.  Mabel creaked to her feet and shuffled across the swept dirt floor. She put her ear to it.

“Open up, in the name of the Witch King!”

Mabel frowned. The voice that fluttered on the other side of the door was more maid than mercenary. Maybe he'd had an accident in his youth.

Mabel had the reassurance of the Witch King that he would never, ever harm a seer. He valued the ability to prophecy the future. Crones in his kingdom were revered. The guard had been inexplicably rude.

She yanked the door open and glared at the man. “You! What do you want?”

A young beauty popped into view from behind the human sequoia with an inaudible ta-da! Her  pale hair was pulled up on high on her head in a centered ponytail that flopped freely as she struck her pose. Blue eyes sparkled. She wore a silver bikini that gleamed and twinkled, contrasting with the guard's hues of dirt and rust. The young woman waggled her fingers playfully. “Do you recognize me, Mabel?”

Mabel raised a hairy eyebrow worthy of a mountain man and scratched her chin. Hag whiskers tickled her fingers. “No.”

Now that Mabel was getting a better look, it appeared as though Darcelinda's armor had as much metal as the guard’s helmet, spread more or less equally over key points of the body. She also wore metallic go-go boots and a gauzy turquoise cape that stopped shortly beneath her hips. Darcelinda giggled and twirled so Mabel could complete the picture. Not that Mabel wanted a complete picture.

“Yes!”  Her voice floated. “Isn't this wonderful? Look how young I am!”

Mabel sucked on her one good tooth as she considered. “You ought to be ashamed of yourself,” she said. “Wearing armor like that, at your age!” She decisively began to shut the door.

“No, Mabel, wait!” Darcelinda grabbed the edge. “Wait here,” she ordered the guard. She wriggled through the half open door into the cabin.

Dribbly candles littered Mabel's room, stuck to whatever surface could support them. On the floor in front of the fireplace was a dead crow, sliced open, inside of which Mabel had been scrying the future. Mabel eased herself into her rocking chair. “I don't take kindly to guards kicking on my door. I think it's against the law.”

“Oh, I just wanted to show you my new command,” said Darcelinda. “I say jump, he says how high. Actually, he says urgh, but he means how high.”

“Darcelinda Wellbottom, I know you. You always leap before looking. That's what I say.”

Mabel rocked back in the chair. “I suppose the Witch King did this to you?”

Darcelinda leaned against the rough wall. “Yes! This is his beautification campaign. One incantation, and voila! An old hag is a nubile hag!” She preened. “Just think! No more rheumatism! No more hobbling around with aches and pains!”

“And no more seeing the future,” said Mabel, rocking forward.

“Well, yes and no,” waffled Darcelinda.  “I can't see the future, but I know what my future is going to be. I'm in command of one of the Witch King's regiments now.”

“That fellow outside? He’s your regiment?”

Darcelinda drew herself up so that her cleavage was perpendicular to the wall. “Well, it's a start.”

Mabel's head motioned toward the dead bird at the foot of the rocker. “You see that? Can you tell me what you see in there?”

Darcelinda crouched as best as she could in metal underwear and stirred the insides of the crow. “Spleen's a little...hey, is that spleen ruptured?”

“Tells me that someone's taking a journey.” Mabel placed a gnarled hand on Darcelinda's smooth shoulder.

Darcelinda protested. “You mean me? No. Why, the Witch King respects all of us, remember? He wants to clean things up around here. And that's all. He's even traded in his black armor for something more pastel. It turns out that deep inside that shell of gloom the Witch King is a true altruist.”

“I'm not changing,” said Mabel. “Not if I have to wear an outfit that makes me look like a barbarian queen.”

Darcelinda stamped a metallic boot. “You just had to rain on my parade, didn't you! You old faker! You've never been half the seer I was. And now you're jealous. Fine. Sit here and be old!”

Darcelinda stalked out the door, slamming it.

A short time after the dramatic exit, there was a tentative knocking. Mabel opened the door. The broad guard stood sheepishly, helmet rotating in his nervous hands. “Sorry about the kick, ma'am. It was orders.”

The big man shifted from foot to foot. “No change for you, then?”

“The Witch King hoped we could keep at least one. I guess you're it.”

“All the others?” Mabel crossed her arms as the soldier nodded acquiescence. “Say,” she said, studying the mental map she'd made of crow innards, “you're not the twisted entrails in the style of a knot, are you?”

“Oh, no ma'am. The Witch King has trusted second lieutenants for that. I'm just a minion.”

Door closed, candles lit, Mabel repositioned in her creaky rocker. She allowed herself the cup of tea she had hoped was in her future and rocked back and forth. Over the rim of her stoneware mug she studied the dead crow and thought about the future.

Cath made this story available for free. Say thanks by sending them a tip.    Send Tip 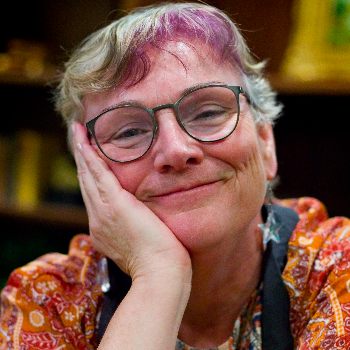