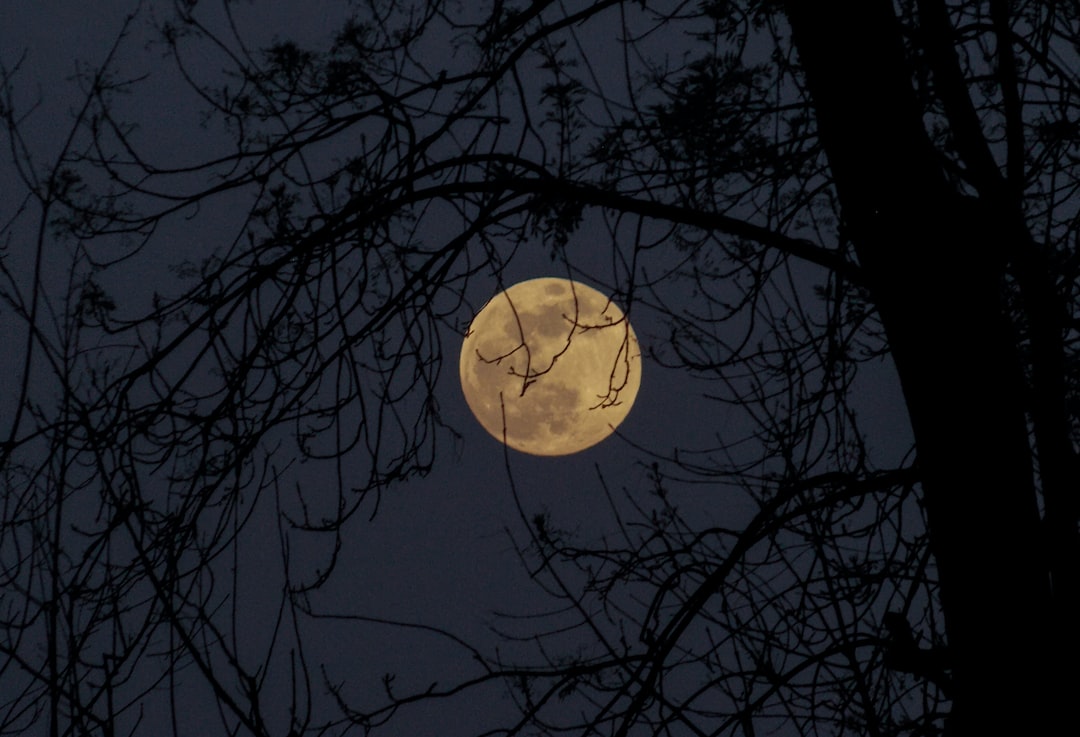 Photo by Aron Visuals via Unsplash.

From the author: A young woman poaching rabbits during blackout meets an unusual traveler on the road home.

"Poachers are meant to know better than to be out under the Hunter's Moon," came a voice behind Martha and she shrieked, jumping half out her skin. Twirling around she saw Jamie lurking beside a tree, glaring. He was lit by the full moon, red hair glittering black.

"You scared the wits out of me!" she hissed at him, glowering. "What're you doing? It's blackout."

Martha sighed, pausing for him to join her on the path. He stepped over the verge, long legs falling into step with her short ones.

"You're being wicked," he said, lighting a cigarette and puffing a breath out into the still night. Mist and smoke twirled around each other, dancing up.

"There's nothing else to be done: the children need to eat. No one else'll do it."

"That's what is in my bag, yes. Maybe they hopped in there."

"They'll have you for stealing."

"If they catch me. No one's out with the raids."

"Just us," he laughed, a low growl of a thing. "I'd have given you our tokens if you'd asked."

"Your Mum needs them."

"I'd make up for it somehow." She smiled, shaking her head at him.

"They're all distracted, there's been a bit of commotion."

"Thanks for that, Jamie." She smiled, leaning her shoulder to his arm. He'd been a sanctuary to her while her Dad was called away fighting, all long limbs and angry rhetoric, willing to fight anyone that would muscle in on a house full of girls left vulnerable.

Not that she was, or her Mum was, but the days were long in the factory and rations didn't go far with young siblings. She had to make ways around that and the odd rabbit hopping into her bag was a gentle one.

"What was that?" he asked, yanking her off into the shadow of an oak.

"I don't hear it," she whispered. He was staring off, head turned to the path, cigarette loose between his lips.

"I heard hooves," he whispered, glancing back the way.

"There's no horses about, they're all shipped off."

"I heard them," he repeated.

She was about to push back when the noise came to her, a rush like the river, alive with voices. She felt the air cool, her breath coming out in puffs like Jamie's smoke, and heard the long howl of a horn rippling out.

"What was that?" she squeaked. Jamie pulled her in closer, plastering them both up against the tree.

"It's not a siren, wrong noise," he murmured, folding over her. "You get in behind me; they'll not see you."

They were interrupted by the sound of galloping, echo upon echo of hooves ringing around them. A blue light was chasing forward, creeping round the tree and thundering upon them. Jamie hugged her tight, shouting as the rush crested.

Martha watched as the figures breached forward, row after row of pale skinned men on dark horses, their eyes black in the night, cascading past. She thought she recognised some faces, young lads sent off for the fighting.

A huge stag interrupted the flow, great antlers matching those on the rider. Martha felt her heart stutter. He was a huge man, taller than Jamie, broad across the chest where a bow sat.

"Herne the Hunter," she heard Jamie whisper and the hoard of ghosts stopped, frozen. The stag turned to face them.

"What do we have creeping about the shadows?" boomed the voice of Herne. He slipped from his mount and strode forward. "Don't mothers teach their children to avoid the nights of the Hunt anymore?"

"My Lord," Jamie stuttered, shoving Martha behind him and kneeling.

"Scotland born, my Lord, but we know you there."

"You dare to interrupt my sport? My men may yet want something to run for them."

"We didn't mean any offence, we were caught unaware," Jamie said, head bowed to the swaggering spirit before him. Martha couldn't look away from the antlers – they weren't a helmet, they came out of his dark hair proud and strong like the stag.

"Not a good answer. Your little pet seems to be distracted," Herne said, eyes flicking over Martha and back to Jamie's prone form. "Maybe I'll take her and leave you?"

"Bugger that!" Martha blurted, glaring at the creature looming over them. "I'm no pet and I was out hunting. We have a rabbit each here, proof of our efforts." She hefted the sack as close to Herne's face as she could manage.

"A wild little thing," Herne chuckled, plucking the bag up. His fingers brushed her arm as he did and she jerked at the contact, cold enough to burn and sparking like an ember. "Two dead indeed. You both hunted?"

"I caught them, I'm quicker," Martha said, holding her hand out.

"In that case it would be remiss of me to condemn one hunt for interrupting another." He tossed the sack back. "On your way, and if I see you again I will take you off to join me."

That was all Jamie needed, he was on his feet and scooping Martha up, over his shoulder as he stumbled into a run.

"Put me down," she wheezed.

He was good to his word, setting her down once the ghostly light faded off.

"The hell was that then?" she asked, rubbing her squashed stomach.

"Ghost, we need to go home," Jamie answered, hands shaking as he tried to spark another cigarette. She took the lighter and clicked it, letting him suck the air through.

"Jamie, your hair," she cried, a hand going up to the curls. They were shot through with white, a star of it snaking from his forehead.

"It'll be fine," he said, pushing her hand away and taking the lighter back. "Come on, lets get back before anything else finds us."