Matt made this post available for free. Say thanks by sending them a tip.    Send Tip

On Offence, Harm, and Near Misses

I've just uploaded a new reprint on here, originally from Daily Science Fiction: The Lies I've Told to Keep You Safe. I'm rather proud of it, because I don't think I've ever been quite so concise in my heartbreak.

I was so very nearly ashamed of it instead. It wasn't until six hours before it went up that I had a reply from DSF saying some last-minute edits had been made; until then, I was chewing myself up over the realisation that despite all my best intentions, despite all my vocal and public efforts to the contrary, I was about to perpetuate harm and ableist stereotypes.

So I want to talk about that. About the responsibility that comes with being a writer. This is going to get long.

First up: read the story. It's 350 words, it'll take you two minutes. Then I'll discuss the differences that nearly made this harmful.

There are two things different from the version that was submitted and accepted. Firstly, the title was originally "The Lies I've Told to Keep You Sane". That's the title as it first came to me, that inspired the story. I was always a little unsettled about the word sane there, but I damped down my gut uncertainty because I couldn't think of an alternative word that fit the rhythm.

Secondly, the seventh paragraph ("I know you couldn't manage...") was originally

Taken together those two aren't, I think, obviously problematic. It's treading near lived experience I don't have, but there's nothing too bad there.

No, the problem comes with the third paragraph, the one that's still there:

Of course you're not a burden to me.

Which seems a loving thing to say, until you remember that the piece is title The Lies I've Told. The narrator is letting on that their mentally-ill wife is a burden.

Is this an obvious implication? I don't think so. I only spotted it in reading proofs, two days before publication. Is it an implication I intended to be there? Absolutely not.

Is it an implication that was there, that perpetuated the harmful idea that anyone on tablets for their mental health is a burden to loved ones? Abso-fucking-lutely. And that's all that matters. And so even though I narrowly avoided the story going out like this, I'm owning it here, as a lesson.

The argument that comes up here, with depressing regularity, is "you can't avoid offending everyone! Soon you won't be able to write anything!" And then probably some nonsense about snowflakes.

Sit down, my friend. There are differences here. Differences I haven't necessarily delineated perfectly, but I'm working on it, because this is professional responsibility.

People are offended when you present an opinion they disagree with. They're offended when you say things like "Frozen was a shit film" or "Final Fantasy 7 is overwrought nonsense". That might cause them some discomfort, but it's not fundamentally making the world a more difficult place for them. They can change their opinions, or keep them quiet. People might laugh at them, but it won't have a material effect on their lives.

Harm is when you make the world a harder place for someone. It's when you perpetuate racist stereotypes and make a reader uncomfortable in their own skin--or make a different reader continue to believe whatever nonsense you're peddling. It's when you perpetuate an idea like women are property to be used by men, and I hope I don't need to detail the many ways the world is broken from that brand of toxicity.

Harm is when you perpetuate the idea, however unintentionally, that people with mental health problems (even when medicated correctly) are a burden. That's an idea that makes them doubt themselves, and feel guilty about their very existence. An idea that makes others cautious of getting too close.

Harm is an idea that makes the world a more difficult place to exist in for some people, by targeting a characteristic fundamental to their being. Something they have no control over. Something they can't hide.

All of those implications above are, I should emphasise, utter nonsense. Mental health problems should be nothing to be ashamed of, same way you're not ashamed of a broken leg. I do not personally believe any of the above ideas.

But they still slipped out of my subconsciousness and onto the page, and I have to own that and examine that if I'm to prevent it again. We are all products of our culture, and our culture is so very imperfect; overcoming its flaws is the work of a lifetime.

And it's important to say this directly: I'm sorry.

(Ableism does seem to be the hardest for me to shake, personally; I think it's a subtler discrimination, wound into our language more closely ("that'd be crazy!" for a bad idea etc.) and less regularly called out. That's a big part of why I wanted to admit to this: so it's one more example of it being called out.)

I suspect, also, that power differentials come into play here. Racism, after all, is not just about the derogatory words, but about the systems that maintain an artificial imbalance to the benefit of some (usually to the benefit of white folk, let's be honest). I reckon you'll cause offence if you punch up or sideways; you'll cause harm if you punch down. And remember that, in intersectionality, you can be at the bottom on one axis (e.g. class) but still punch down on another (e.g. sexuality).

This is perhaps why there's no easy answer, no checklist of Topics You Can and Topics You Can't Write: because everyone is at their own unique intersection. You have to know yourself, be cognizant of your own position in society, to know where you must tread carefully.

Why do I take all this so seriously? Well, apart from the fact that I'm not a dick and so I don't want to hurt people if I can at all avoid it, it's because words have power. And I know you believe that too, because otherwise you wouldn't be here, buried down in who-knows-what-paragraph this is.

And if I'm going to write, going to send my words out into the world to reshape it in whatever way I'm capable of (even if that's only made someone smile when they wouldn't have otherwise), I have a responsibility to ensure that power is used consciously and wisely.

If I want the acclaim, the audience and the six cents a word, I have to take the responsibility too. To pretend otherwise would be to embrace childhood, and turn my back on maturity. I don't abrogate my responsibilities at the day job; I accept them as part of what I'm paid for. It's the same arrangement here.

Lesson one: Listen to your gut while you still have the chance to do something about it. I said earlier that I was uncomfortable about the word sane in the title. I chose to ignore that when writing, but my discomfort only grew. Sometimes my heart knows what my head is still working out. (My brain really is the stupidest part of me.)

Lesson two: examine your work from all the relevant angles. This story broached the topic of mental health, so I should have made more effort to think through the consequences there. The speed with which I wrote this is no excuse: the work of responsibility must be done every time.

Should I have examined this story from the perspective of other races? Could've done, but it would have been a waste of time; it doesn't broach the topic at all. That's why I say relevant.

Lesson four: move Heaven and Earth to fix it when you can. I was lucky to get proofs from DSF two days before publication (I didn't last time out). I was lucky, and am exceedingly grateful, that Jonathan at DSF took my concerns seriously and enacted the changes before publication. I spent the entire of Tuesday stewing over this, wrestling with how to change it, or if I even should--if I was being paranoid about an implication too subtle for anyone else to notice.

But the point is that even if I was being paranoid and no-one else would have noticed, I'd have spent the whole day today feeling awful, waiting to be called out, refusing to signal boost a story that has (in the event) had an astonishing reaction and inspired at least two other writing friends to write something in response. That's never happened to me before, and I'm beyond delighted; and I'd not have been able to feel that happiness if I'd been worried about having perpetuated harm.

You do not, incidentally, have the right to abandon the attempt post-publication, if it comes to that. Revisions can be made any time on the internet; here's one excellent example from Mary Robinette Kowal.

Lesson five: there's always another way. It took me a lot of staring at my screen and feeling terrible, and it was about four hours to come up with 19 new words, but there was another way for this story. And you know what? I think "codependency issues" is a stronger beat anyway, more telling of the relationship, more tragic. I think the story is better for these changes. Which gives the final point:

Lesson six: it's a craft issue. 90% of the harm you unknowingly perpetuate will be because you're regurgitating casual stereotypes (as I was here). You'd work to strip out clichés in your phrasing, in your plotting and in your characters; you should damn well work to strip it out in your representation too. Your story will be stronger for it.

Yeah, it's more work. Did you think writing was easy?

Matt made this post available for free. Say thanks by sending them a tip.    Send Tip 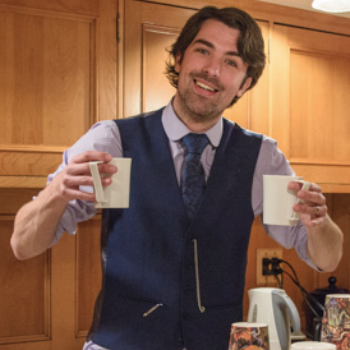