From the author: If you're a big fan of horror movies and video games, you might find that exploring horror in fiction is... weirdly slow. Why does horror change so drastically across mediums?

There aren’t many other genres that are so fully dependent on execution that they become vastly different depending on the medium they’re in. Fantasy in literature, film and TV, and video games bears the same hallmarks across the various media, as the characteristics of fantasy are easily transferable from one to the next. Sci-fi, depending on the age of the source material, might have fewer explanations of science in film, TV, and video games, but will largely not change how entire scenes are executed. Aesthetics might be created purely for visual media but their descriptions are also not out of place in literature.

For many people, the hallmarks of horror include blood-curdling screams, visually-disturbing characters and scenery, jumpscares, and on-screen panic. Ever thought about setting up a jumpscare in prose? There’s an exercise for you. Give it a try.

While certainly not impossible - and while jumpscares even in film and video games require proper execution to land - jumpscares must be handled in a  fundamentally different way in mediums where the reader/audience can pace themselves as they proceed forward. Notice that there’s a difference even between visual media: horror in visual and sequential art don’t have the same capability to utilize jumpscares the way that film, TV, and video games do.

There goes one of the most fundamental aspects of horror for some people. The way that jumpscares function in horror is similar to how a rollercoaster executes its thrills, and for those who have been educated on horror via movies or video games, removing this aspect is like removing a major organ. So where is the horror in words?

Similarly, we can examine how horror utilizes visuals vs describing a scene wherein the reader must supplement the prose with previous knowledge and their own understanding to form the mental image suggested by the author. While visual and sequential art share a similarity with film, TV, and video games in terms of their ability to simply show us grossness or to create some dreadful atmosphere, visual and sequential art also share literature’s ability to allow the viewer/reader to control their consumption of the work.

Medium as a Tool

The deliberate usage of one medium over another has implications of how a story is told. We cannot expect that a story will have the same effect when written in prose as adapted into a movie as adapted into a video game. The differences are fundamental to the mediums themselves, as they allow creators more or less freedom in specific areas of craft.

This is true across every genre, being specific to the medium of which a story is told, but few genres quite use these techniques as thoroughly as horror (I think the argument can be made for comedy, though). Much in the way that video games get praised for mechanics that fully utilize the breadth of the medium, horror that functions well is generally horror created by someone who understands how the genre functions within the medium it is written in. The execution of ideas becomes dependent on the medium itself.

I want to introduce the concept of a screen (loosely based off Lacan’s Screen Theory): the idea that creators have some level of control over how their audience perceives and interacts with their work, based on the medium they use. The audience has some form of autonomy in their engagement with the work, which can take the form of being a passive viewer/reader or an active player.

Back to the rollercoaster analogy for a moment. In video games, film, and TV, the audience observes the work, on rails, as directed through a world and a story by the creators (there’s more nuance to this with regard to video games, which I’ll get to in a moment). The act of forcing the audience to interact with the story only through the direction of a camera’s image gives the creator total control over what the audience sees. Much like how the rails then force a car full of people through twists, turns, and steep hills to elicit the fear/thrill response, video and cameras force an audience through events and visuals to the same effect.

So What About Autonomy?

Film and TV function on the basis of the audience having absolutely no autonomy in their interaction with the work, assuming that the audience does not simply close their eyes or walk out (the rejection of the work is, I think, another discussion entirely). Video games do this too, most obviously in its usage of cutscenes but also in certain scripted playable elements, where the game, aptly, “railroads” the player through a scene.

In literature, sequential, and visual art, the audience has total control over how they interact with the work. It’s not that the audience has total control over the work itself, but rather that they are able to control the speed at which they consume this work. In literature, it’s in the act of reading. In sequential and visual art, it’s in how the audience can look around and explore the details that the artist has laid out. The audience can be leisurely, taking their time through the work at a pace they are able to stomach. They can skip ahead, consume a work in the broad before delving into the details, or even start from the end and work forward. Here, autonomy is in the hands of the viewer.

With video games, there’s potential for a hybrid. Cutscenes, for instance, function exactly like a film does, although some are programmed to allow for the player to move around - but not to interact with the game at this point. By and large, video games allow for the freedom of immersion: players take control of a character, typically forcing the developers to design levels in ways in which the player is directed through the game, and thus the plot. Level design is, in some ways, an extension of the conversation regarding film, TV, and the camera. What you have is a framework wherein the audience is forced to follow and developers must predict the ways in which the player might try to break this framework.

The mere fact that players are able to break this framework is a testament to the level of autonomy that the audience is given in video games. It’s been used countless times by people who are interested in finding all the ways a game is broken, which is probably a conversation for an entirely different series. Still, player autonomy is a strong part of video games. The interactive part of interactive media allows for a connection between the audience and the work in a way that cannot be replicated elsewhere. When you give the audience the ability to interact with the work, you allow them the ability to interact with the framework of the piece in ways that other mediums are unable to replicate.

Environments Are More Than Just Backgrounds

Interacting with the framework itself has interesting implications with which sorts of information you can place within the work that is then meant to be explored by the audience. Video games frequently utilize environmental worldbuilding and storytelling, especially those where there isn’t a strong narrative element linking the actions of the player to the narrative framework of the game. These games typically encourage player exploration, rewarding the player with flavour text regarding items meant to help the player piece together the story on their own.

Within the context of horror, the environment can become a point of interaction in video games, in the way that the other media are unable to do. Literature does not depict every aspect of the scenery; film and TV restrict the amount of time the viewer can examine an aspect within the chosen frame; visual and sequential art must be just as selective with which aspects in which to display to the viewer. While there is still the argument that the framework of the level/game itself restricts the interaction with these images, horror games frequently make use of the environment as means to create an atmosphere in which the player can then be absorbed in, where they can linger and hold their gaze and even be forced to interact in ways where their undesirability is highlighted by short pieces of visceral animation.

The interactive nature of video games also allow for the player to develop habits and form memory that the creator of the work can then exploit to elicit a reaction. It creates an environment that allows for horror to arise via the consequences of the player’s actions or by deviating from the established habits and formed memories around actions and maps within the game. It’s in this framework, where the player can be forced to navigate obscured maps or to interact with objects (both items and also things like doors), that we see that creators can manipulate the experience in a way that utilizes the autonomy of the audience in order to insert them into the work.

In creating maps that are obscured (such as dark hallways or foggy landscapes and purposefully confusing and cluttered maps) and maps that shift (locked doors that weren’t previously locked, rooms that were previously something else), the audience experiences a loss of control. That sort of helplessness is commonly utilized across horror and can be done to elicit the sort of high tension atmosphere of horror games that rarely - if ever - reveal an enemy.

Helplessness - this inherent lack of autonomy - is a fundamental way to derive fear. Fans of other genres might bemoan a character’s lack of autonomy, while the lack of autonomy generally heightens the tension and fear and dread surrounding a character in horror. What makes the difference between a thriller and a horror? Make makes something fundamentally a horror story and not a story with horror elements?

When we consider horror in literature, we’re typically dealt with the horrific on the level of grand, existential crises that are not quite so easily articulated in any visual media. We have the ability to develop a deep empathy with a character, pulling them close to their thoughts and dreads and fears in a way that prose does best. It’s here that we see this extension of helplessness, this lack of autonomy, that drives the fear response toward a sense of the inevitable.

It’s also for this reason that I tend to think of happy endings in horror as those where the characters finally regain that autonomy. To climb through and survive and only survive might be considered a Bad ending - a downer ending even - for other genres, where the audience is accustomed to endings where the characters are rewarded for their actions in some way. But sometimes it’s just a matter of wanting to survive, to pull through out of Hell and to reclaim some sense of control. 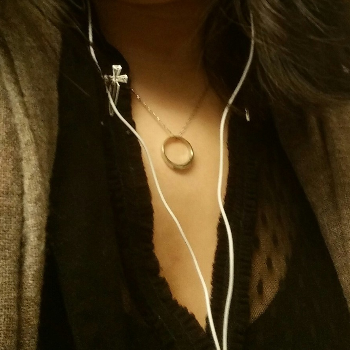