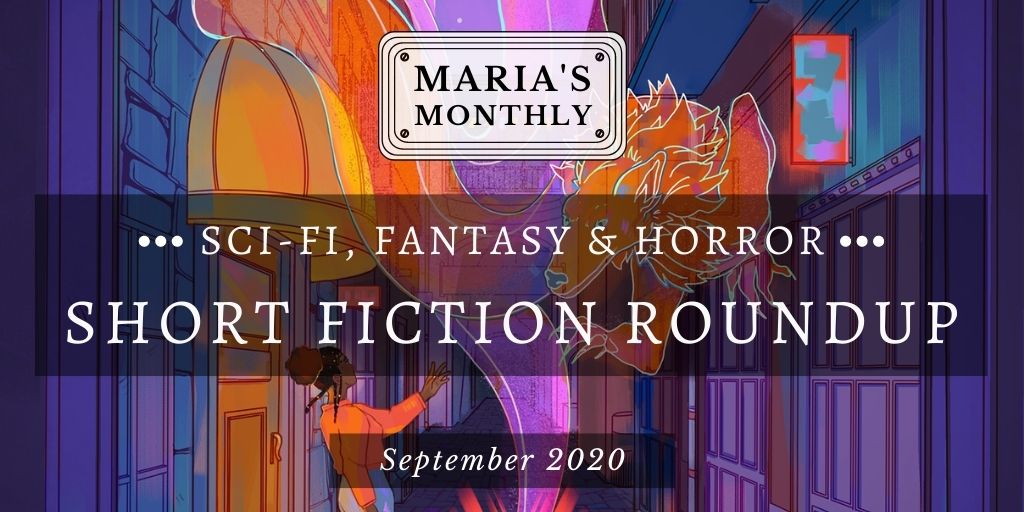 Art by detail of Lorna Antoniazzi's cover art for Augur 3.1.

From the author: 13 excellent stories I read in September, 2020.

Apologies for being a bit late with my roundup this month, but here it is: 13 excellent stories I read in September. And if you want even more short fiction to read, I can recommend the speculative fiction stories from my latest Short Fiction Treasures Roundup at Strange Horizons.

A decidedly haunting and deeply unsettling story where the ragged edges of cruelty, misfortune, and horror cut ever deeper as we follow the origins of a haunted house. We learn about its beginnings and how it grows, how it ensnares the wicked and unwary and willing, how it terrifies  visitors, and pulls children and adults deep into itself until they cannot escape. History wraps itself around the horror, and there’s such a wrenching sense of wounded rage and menace and sorrowful malevolence here. I read this story very late one night, and it followed me into my dreams.

Call Them Children by Wenmimareba Klobah Collins in The Dark

“Mama Dlo,” she says, quiet and child-like in the awkward search for the right words. “She likes children with good, strong singing voices. She’s the one that’s taking them..."

In a world where the water and the mangrove trees are everywhere, the looming threat of Mama Dlo is ever-present and children are disappearing. Braving all the dangers lurking above and below the surface, Yuya heads out into the water to look for Camelia who is missing but as it turns out, the real danger is what awaits Yuya when Camelia is found. A taut, atmospheric horror story that spirals deeper and deeper into nightmarish terror the further we follow Yuya. Beautifully written, deeply weird, and thoroughly wonderful.

A postapocalyptic tale where only children seem to be left in the world, and where a 16-year old boy, is trying to build a community and care for a group of kids. The responsibility is a heavy burden that is weighing him down and wearing him down, and then, a girl arrives with a gun and everything that was already paper-thin and brittle seems about to unravel. Ogden masterfully makes you feel the tension, love, and strife within this community of children. The characters and especially the relationships between them are so perfectly captured – fraught, tense, taut, and yet full of hope and empathy—and for me, it's this depth that sets this story apart. If you’re looking for a postapocalyptic tale that might be bleak but is NOT devoid of hope, then this is it.

This story about a woman who loses her child while she is in prison, is one of the most unsettling, evocative, and memorable stories I’ve read this year. Weaving in and out of the past, the present, and the future, it dips into horror and darkest fantasy. What makes it so devastating is how real it all feels: a childhood marked by death and trauma, by being an outsider, and blighted by a mother who seems beyond reach, even when she’s right there with her knitting. Brown skilfully blends the everyday world with strands of mind-bending strangeness, and yet it's a strangeness that is firmly rooted, and knit into, the fabric of reality.

Ruth's sister Jo is missing. She's gone looking for a black horse she saw, a strange black horse that might, or might not, have been something other than a horse. And now Ruth who said she did not believe Jo, did not believe in that black horse, heads out into the dark and stormy night to find her sister. I love the rich, sumptuous prose of this story and I love the fierce desperation and urgency of Ruth's quest. I also love the way different beings meet here, and how Ruth is assailed, and maybe also helped, by forces she did not quite believe in before.

A quiet and unsettling, yet deeply relatable, story about adolescence, identity, and trying to find a place in the world where you might fit in, body and soul. Hynes's story delves deep into the awkwardness of trying to figure out who you are and who you might become, while also exploring the shame and joy, lust and fear, of being human. There’s a dark thread running through this story that made me think about all the possible lives, and the possible selves, we might have had, might have become, might have explored, and how these other selves and lives might haunt us for the rest of our days.

Old-school fairy-tale vibes twine together with the reality of domestic abuse and violence in this gripping, gritty story by Lindy Biller. There’s a father who won’t let his daughter leave, a mother who seems resigned to her fate of serving the man in her life, and a daughter who is determined to escape the confines of the home where she’s grown up. I love the way this story rings with the sound and sights of fairy-tale, yet keeps a real world edge.

Dragon Years by Juliet Kemp in The Future Fire

A warm and moving story about a girl who sees a dragon, first when she's a little girl and then several more times in her life. While she is tempted, she chooses not to follow when it asks her to come... at least the first few times. There's a deep sense of mingled joy and sadness and regret here that is absolutely wonderful, and the ending just about cracked my heart. If you enjoy this story by Kemp, you should also read "Small Magics" in Flash Fiction Online (it was also part of my latest Short Fiction Treasures Roundup for Strange Horizons).

Deep in the Drift, Spinning by Lisa L. Hannett in Beneath Ceaseless Skies

With a mental inhalation, Winni sifts the drift for the right whirl in the air, the right future Gert’s here to imbibe. She draws everything in: these avian vessels, their airborne calls, their salt-spray scent. Magic, not marrow, will soon fill the gull’s delicate bones. Magic to set them all flying.

I love Lisa L. Hannett's fiction, and her stories are often a blend of weirdness and darkness and magic, and this story is an excellent example of her wondrous prose and of her strange, often harrowing, fantasy-worlds. Winni uses the bodies of birds to make and harvest magic. She can change things, she can change people, she can see what might happen. And yet, in spite of that power, she has not been able to get back her daughter, lost now to Winni and headed out on paths of her own. Winni's world is a hardscrabble place, full of hard lives and tough choices, and the choice she ultimately makes here, what she has to sacrifice to get what she wants, makes for a sharp and piercing piece of fiction.

Note To Self by Sunny Moraine in Lightspeed

The notion of the quantum mirror was first floated by two graduate students (Sapna Gupta and Mark Shaw) over a fourth round of beers in a small pub in Cambridge, Massachusetts, and therefore one should consider the role of intoxication in its initial conception. This is not to say that the notion itself was a foolish one; the subsequent procession of events should be sufficient proof that it was not. It’s merely to point out that sometimes a shift in perspective is required to push the world into something new.

Written as an unfinished essay, a work in progress with notes from the author to the reader and conversational asides to themself, this story feels a bit like Umberto Eco's writing, riffling through found notes, blending real world literature and events with science fiction. Moraine's intriguing story twines together scifi and horror as we find out what happened once the first quantum mirror was made and the world was irrevocably changed. Chilling and gripping.

Baboon, Brain, Brick by Louis Evans in The New Modality

Nothing about Aaron Metzger’s mind was out of place except for one comprehensive and overwhelming delusion —  that the forty years from 1978 to 2018 had gone remarkably well. Incredibly well. Those four decades represented a golden age of global peace and prosperity that the doctors could scarcely imagine.

Oh, this is the story I needed to read in these dark times. It's a story that makes you think that maybe the world could be a better place, maybe it could have been a lot better already, if only people had been able and willing to make other choices. And maybe, in an alternate timeline, we are all doing quite alright. In Evans's story, Aaron Metzger drops into our world with memories of quite a different world lodged in his mind. When he is told of the current reality, he is at first depressed and confounded (I can relate), but then he uses his alternate timeline knowledge to nudge our world in a better direction. Except, well... you'll have to read it to find out what happens. It's a clever, darkly humorous, and heartfelt story that made me long for better days.

If legends of lost cities were true on Earth, some credit for these tales went to the whales that lived on the planet of Starym, situated outside the reaches of the Milky Way.

A delightful and heart-warming (in the best and truest sense of the word) fable of whales in space and the secrets they carry with them, and how one of them ends up alone in Earth's oceans. Eventually, it ends up sparking tales of wonder among those who see it ascend.

Redder by Vajra Chandrasekera in Nightmare

Compelling, mesmerizing, and full of terror and wonder, this story is nightmarish and visceral. To quote Chandrasekera on Twitter, it features "crocodiles, political assassination, and the tallest of grandmother's tales". It's also part of a set of stories. Again, quoting the writer's Twitter-thread:

“Redder” was written as part of a thematic triptych of sorts, the second of which, titled “Redstarts in the Last Summer,” will appear in next year's Chiral Mad anthology. (The third is written but I haven't sold it yet....)

It's the kind of story I hesitate to even attempt to describe, except to say that it's brilliant.