Karlo Yeager made this post available for free. Say thanks by sending them a tip.    Send Tip

Author Karlo Yeager Rodríguez recounts the path that brought him from Puerto Rico to Baltimore, and the cyclical nature of hope and tragedy reverberating through his family and community.

From the author: A short memoir on the cyclical nature of how we got here, and how it affected me and my family.

Some days ago, prompted by an online friend, I started listening to William Basinski’s “Disintegration Loops”. It was overcast, and quiet in the office as the musical phrase repeated, diminishing and distorting with each cycle.

I recognized it from the Radiolab episode, "Loops," which I'd listened to years ago, and as was often the case then, it flowed over me, but I didn't try to learn anything more about it. I filed it away as not much more than a curiosity.

Until the other day, listening to the music, I decided to look it up online.

He completed recording in Brooklyn, on the morning of September 11, 2001.

As I read that story, I'm taken back to that same day. I'm in Puerto Rico, staring at the television as a colossal pillar of smoke pours into the sky, and the second plane barrels into the remaining tower. I'm no longer sure now if the footage was pre-recorded and playing over and over, but for a long time afterwards, it seemed important to add that I'd seen it live.

I spend the next few days online, reading news and blog posts before the weight of what happened crushes me under it, and I cry. The world has changed.

Now, I know invisible machineries run the world we've made. Wheels upon wheels within wheels, all turning in precise, jeweled movements, unable to be stopped by any one person.

The musical phrase pushes its way forward, distorted into a slow warble.

It's 2008. While the whole banking system is imploding in the US, it's already the third year of a long slide into economic devastation in Puerto Rico. By the end of the year, more than 15, 000 government employees will join the masses of unemployed people on the island. The local government's in so much debt it must "tighten its belt" in order to keep its creditworthiness, never mind that none of the layoffs affect agency directors or their staff. Mass protests happen outside the Capitol building, raucous affairs with bomba y plena music and dancing; regular people who want their representatives to do something, anything to stop what's going to happen.

SWAT police disperse the people. Riot shields pushing the crowd back, they crack their batons against anyone within range. Several university students and at least one teacher suffer broken bones.

In the end, they couldn't stop what was going to happen, and the world kept turning.

The music cracks, falters, surfaces again out of the background hiss.

It's late summer, 2011. I've left my life in Puerto Rico behind and now live in Baltimore. Next year, I'll vote for Obama's second term--the first time I'll be able to do so. At that moment, I'm with one of my roomates at the Occupy Wall Street encampment. There are a hundred people or more who've taken over McKeldin Park, across the street from the Bank of America offices downtown. It's in that chaos that I first hear about the 1%.

By the end of the year, riot police would force protesters out of parks all over the US.

In the present, I check my phone and smile at the messages my wife sent. Should we go out or make something for dinner? I message her back, I'll cook and return to my work. By now, the music has changed, the mournful sound of horns transformed into something almost percussive, the gaps where music once was audible.

It's late summer 1998. Hurricane Georges howls outside, and I'm huddled together with my partner at the time and her mother when the winds tear the roof off. I have a l'appele du vide moment as I stand, in the rain and wind, expecting a sheet of metal to slice down into me from the eerie green glow of the clouds. We race downstairs, leaving the two cats behind. We wouldn't go back until 20 minutes later, finding both of them under the bed.

It's late summer 2017, and I don't watch more than a few minutes of Facebook Live feeds, showing Hurricane Maria's winds first rip through the Virgin Islands and then Puerto Rico. I comfort myself that my family will get through this, they have to get through this. There's been enough tragedy in the family already with my mom's death less than a year past.

It's spring 2018, and my sister moves into the house down the hill after staying with us for several months. My father stays with her, finally able to walk well enough after suffering a concussion during the hurricane. They've been trying to file claims with FEMA, but their initial insurance claims are dismissed as invalid. My father wavers between fear of never repairing his house and certainty he'll be able to sell it. I try not to say it, but I'm sure he hears it in what I don't say: he may lose all the money he and my mother put into it over the years.

Summer, 2016. I'm aghast that the same President I'd been so thrilled to vote for in 2012 has signed PROMESA into law. Puerto Rico's debt is essentially unpayable, and I had believed it could be forgiven, but not anymore. Puerto Rico is forced to make more deep cuts to public services that keep things running for everyday people on the island so that a handful of people in New York don't have to take a cut in their projected profits. I wonder how my sisters will survive.

In 2018, by the time President Trump shrugs off what's happened in Puerto Rico, it's like some type of repeat of what's been happening for years already.

It's fall of 2017 and my dad is receiving treatment for what the doctors think was a concussion. He keeps saying he wants to go back and I have to explain that hundreds of people have already died in hospital ICUs because there's no power and there's no budget for generators. Weeping, he keeps repeating, "Dios mio, how could this happen?"

It's summer 2011. I'm at the airport at 6 AM, saying my goodbyes to my parents. My mom has tears in her eyes, but my dad is weeping. He's afraid he won't see me again. He doesn't know he's almost right at the time.

I won't see him again for seven years when I would visit my mom for the last time.

Summer 2018. My dad decides to go back to Puerto Rico. He's sure that he can get more done by going in person to all the different offices he'll need to visit, and he wouldn't be wrong if Hurricane Maria hadn't happened. My sister and I warn him of this many times before he goes, but I realize he needs to see it himself.

I stop the music.

The loops stop before I reached the end of the composition, but that's fine.

I'm done for the day, and even though the day is still overcast and fast darkening, I'm eager to get home. I promised my wife I'd cook, and I'm going to make a chorizo and garbanzo stew. It's the weather for it.

My sister messages me. My dad is coming back for Thanksgiving, we hope it's to stay.

I head home, worried about what else we can expect in the future, but today I'm doing good and I don't know how long that will last.

Karlo Yeager made this post available for free. Say thanks by sending them a tip.    Send Tip 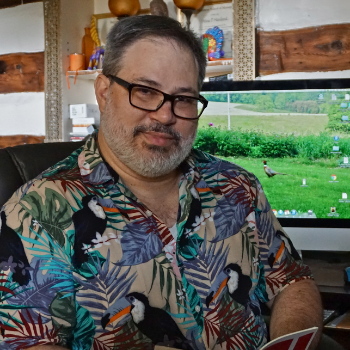