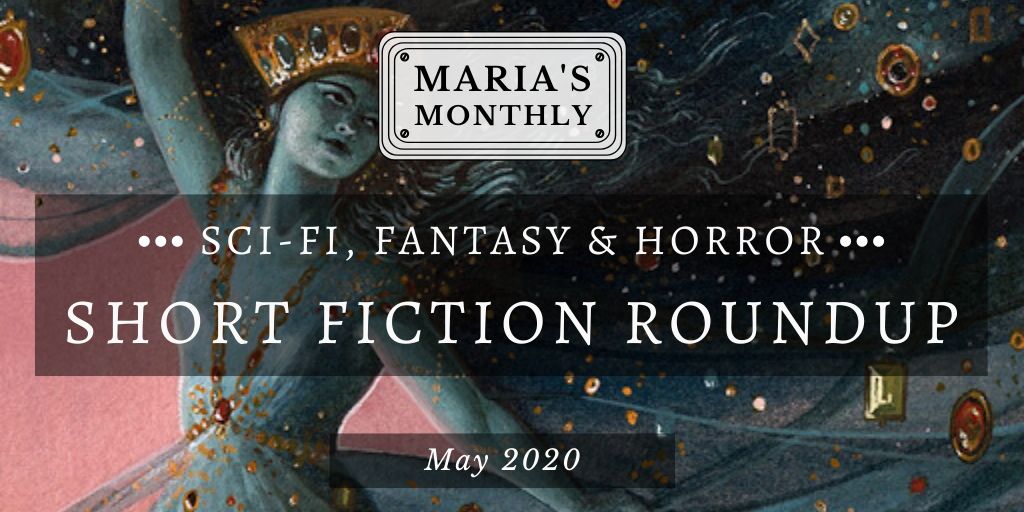 From the author: 13 great speculative fiction stories I read in May, 2020.

No big words or small talk as an intro to this month's roundup. Just this. Listen to what black people are saying. Read what black writers are writing. Stay informed. Speak up. Take care of each other.

If you're donating your money, please consult Black Lives Matter's curated list of organizations to direct your donations.

If you're looking for causes and organizations in the speculative fiction community, then this thread from SFWA on Twitter has some suggestions for you.

There can be no real peace without real justice.

Akhulume by Larissa Irankunda in Fireside

I love this sharp and evocative story about language, the power of words, and the way we speak them. The narrator of the story is trapped in a strange place, among strange beings, and again and again their spoken words seem to destroy the captors, only for them to return as if nothing has happened. There is a sense of increasing desperation as the story progresses, with language revealed as a source of power and resistance, until... until the end, which hits hard. Gorgeous prose packed with emotional power.

You didn't know how to tell Dada you had created a world in your head, and we were the products of that virtual construction, Yugo and I. We both looked like you, only that you always made us wear a smile, and hid your pain from us, always making us look like perfect kids. You hid in our bodies to deny yourself grief whenever the world ridiculed you.

A fierce and gorgeously written story about a girl who grows up different from the other children around her, even adults treat her like an outsider. She finds solace in a world, and characters, she creates in her head. But maybe, those creations find a life, and purpose, of their own. There are sharp splinters of both pain and hope in this story.

Food, delicious food, heartbreak, grief, power, and foodie culture all come together beautifully in this story by Vida Cruz. It's about eating one's feelings at the Heartbreak Cafe, and everything here is so vividly drawn that you find yourself head over heels in love with a fictional restaurant and probably terribly hungry by the end. This story truly is a feast for your senses, and your heart (broken or not).

Maria’s prized top-notch ingredient – the one that allows humans to digest the food at all – is human heartbreak. And she is currently accepting applications from those willing to have theirs harvested.

February Moon by Josh Rountree in Beneath Ceaseless Skies

There are so many facets to this dark and terrible and wonderful story by Josh Rountree that appeal to me. I love stories about wolves, and I love retellings of Little Red Riding Hood. This isn't exactly a retelling of that fairytale, and yet the bones of that story are present in ways that make it feel both new and ancient. A woman lives alone with her children. Her husband is missing. Something stalks the woods. And now the locals are getting nosy... Fantastic dark fantasy.

An original and heart-piercing take on the afterlife, Nikolaidou's story takes place in wartime and is told from several points of view. In this realm between life and death, there's a bar, a soldier who thinks they are dead, a long-haired barman, and a nun. Each one tells a part of the tale, unfolding the secrets of the Queen of Crows and the truths you can taste in honey. Weaving together tales of love and loss, death and life, we find out that there's a deal to be made here and as always, there is a difficult price to pay.

An excellent witch-tale where the witch in question, a woman named Sigga, has been shipped off to a penal colony of sorts with other lawbreakers. In this new place, just as where she came from, there are people who try to tell Sigga how to live, and try to frighten her to fall into line. And just like she did before, Sigga has her own way of doing things.

Of Roses and Kings by Melissa Marr in TOR.com

A wonderfully dark and twisted re-imagined take on Alice in Wonderland, where "Alice is now the Red Queen, and her maid must tread the fine line between favor and blame in this strange world." Marr's fabulous story tilts and shifts the perspective and the Wonderland world (and its inhabitants). I love the way this story imagines both the nature of Wonderland and the link between the our "real" world and this other realm.

She turns back to me and picks up a brush. Mine is made of pine needles, the handle a broken stick, my hair tangled with leaves and crusted with mud, but she can’t see any of that. She sees what she expects to see.

This is a fantastic flash fiction story that takes the idea of changelings and human children and turns that idea on its head. Through a mirror, a changeling watches the human child she was supposed to replace, listening and watching as the girl and her mother bicker and spar. It's all both terrible and wonderful, and the ending is perfect.

A Stick of Clay, in the Hands of God, is Infinite Potential by JY Neon Yang in Clarkesworld

This science fiction novelette by Yang deals with gender, friendship, loyalty, and the confusion of figuring out who you are in the world and what your purpose is in it. It's all that AND it has giant robots and harrowing science fiction battles and warfare. At the heart of the story is a group of mech pilots and "holy sigils", who live their lives as part human and part machine. (It takes one pilot and one sigil to control a mech/robot.) It's a rich and textured world, and Yang's unflinching eye for emotional depth makes each character pop off the page.

We Are the Flower by Claire Humphrey in Podcastle (narrated by Jen R. Albert)

Fuck that noise, right? No wonder people come back and haunt shit over and over. It takes ten times longer than you think it should to find out anything useful.

A foul-mouthed ghost who is trying (maybe?) to come to terms with their demise, and understand what to do in the afterlife--that's the protagonist of this both hilarious and heartbreaking story by Humphrey. I love this to bits, and what really makes it shine to me is the voice: I had no idea how I craved a story about a fierce and sweary ghost.

Sleeping in Metal and Bone by Kristi DeMeester in The Dark

A woman dreams of needle-sharp hooks growing out of the ends of her fingers. She wakes up sweaty and hungry for things she should not be hungering for. Meanwhile, her husband is wrapped up in ensuring that she can get pregnant and carry a child to term after several failed attempts, and he clearly does not see nor understand what's moving beneath the surface of his wife's mind. DeMeester twists this tale darker and tighter and sharper with every paragraph, capturing the stifled emotions of a woman who has tried very hard for a long time to be what she is not. The ending feels like a scream and a breath of air when you've almost drowned.

Driving With Ghosts by Clara Madrigano in The Dark

During the summer when I was seventeen, I saw my first ghost.

That's the opening line of Madrigano's harrowing and mesmerizing tale. It starts off with the protagonist driving home drunk and seeing her late grandfather's car ahead of her on the road. The memories dredged up that night, the ghost she almost encounters, follow her through the years. Madrigano masterfully weaves together haunting real-life horrors with the presence of the ghost, weaving all of that into the narrative of childhood, adolescence, family, and a relationship that turns into its own horror story. I love ghost stories, and this one cuts deep.

This entire issue of The Dark is a spectacular read, with excellent reprints by Angela Slatter and Ray Cluley as well.

Riding Through the Desert by Laurence Raphael Brothers in Zooscape

Zooscape continues to deliver fabulous fiction with a very particular slant. It's an "e-zine of fantastic furry fiction. Here the animals can talk, magic flows, and the stars are in reach." In this particular story, there's a talking horse. Though it's a horse with some strange abilities beyond just the gift of speech. Susannah and the horse are travelling through the desert when we first meet them. Water is in short supply and both her and the horse are almost dead before they find their way to Pioche, Nevada. What happens once they get there is, in the words of the author, "a post-apocalyptic weird-western cosmic-horror interspecies romance", and YES, it is one heck of a tale.