From the author: A post on writing the second book in a trilogy. Published as a guest post on Bookish in July 2019.

It’s a frequently-held opinion among writers that the second book in a trilogy is often the hardest to write. The first book is carried along by the fresh energy of the story and the characters, and the reader is coming in with no expectations, ready to be drawn in. The third and final book has the momentum of the previous books behind it as it races toward the series-ending climax. The second book, however? Sometimes readers come away feeling as if it’s the “soggy middle” of the series, a necessary but unremarkable bridge between the first and third installments.

I’ve been living in Book Two Land for the past three years. My latest novel, Jade War, the second book in the Green Bone Saga and sequel to the World Fantasy Award-winning Jade City, released on July 23. Before Jade War, I wrote Cross Fire, the sequel to my young adult science fiction novel, Exo. Writing two Book Twos back-to-back was a sure fire recipe for stress, but it taught me what I believe is the secret to writing a second book that equals or surpasses the first.

The middle book can’t just continue the story. It has to break it.

Great sequels do not simply merrily resume the story with the same conflicts and antagonists. The characters can’t be dealing with the exact same issues they had in the first book. A couple of years ago, I discarded 35,000 words of a first draft manuscript of a book two because I realized that I’d picked up right where I’d left off after book one, drawing out the same story threads, only to find them thinning alarmingly as I went on. While it’s true that the overarching struggle and character arcs of the series must move forward and take on new dimensions and higher stakes, in order to be compelling in its own right, a second book should challenge the reader with new elements that recontextualize the story they know so far. A tall order, when the sequel also can’t stray too far by abandoning or downplaying what readers loved most about the first book.

Successful sequels pull this off in different ways. The Obelisk Gate, the second book in N.K. Jemisin’s Broken Earth trilogy, hooked me by introducing the opposing point of view of Nassun, Essun’s daughter, forcing me to view the main character in a different light. Pretties, the sequel to Scott Westerfeld’s Uglies, placed the main character, Tally, exactly where she didn’t want to be—on the opposite side of the struggle. In film, Aliens took a horror story premise from Alien and continued it in action movie fashion. Terminator 2 made us root for the first film’s villain.

With the Green Bone Saga, I built myself two frameworks: one that expanded the story and took it in new directions, and one that kept the series focused. Jade City revolved around the conflict over control of magical jade waged between the two major clans in the fictional metropolis of Janloon. I knew I had to fundamentally change the game, to break the story in some way, with each subsequent installment. My guiding mantra was that the second book would take the story international, and the third book would make it intergenerational. With that in mind, Jade War couldn’t be driven by more of the same street battles. It is propelled instead by international threats and conflicts, foreign crime bosses and avaricious governments, the nuances of cultural diaspora, and a whole plot line set in another country that intersects back to the main story.

At the same time, I was determined not to fall prey to the relentless scope creep that sometimes afflicts book series. A strong middle book breaks the story in some way, but the series still requires an intact spine, something that makes it cohesive as a whole. For me, that was the vision of this trilogy as a family saga. No matter how much I expanded or layered the story, at the end of the day, I would never stray far afield from the beating heart of the books: the family.

Sometimes maligned or overlooked, the middle book in a trilogy, at its best, is the series game changer for the characters and the reader. What are some of your favorite middle books?

This article was originally published in July 2019 as a guest post on Bookish. 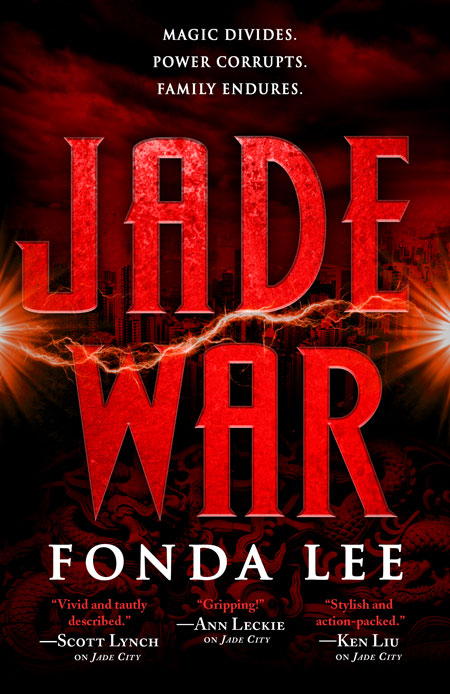 In the second book of the Green Bone Saga, the Kaul family faces new threats and forms dangerous alliances as the struggle for control of jade and the future of Kekon escalates into international conflict.